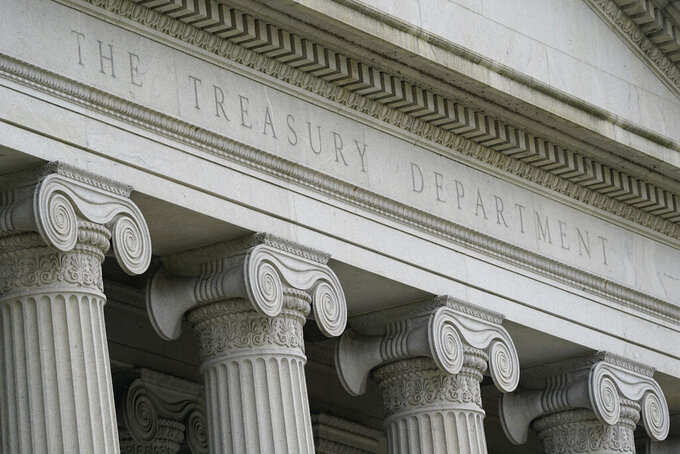 Patrick Semansky, ASSOCIATED PRESS
FILE - The Treasury Building is viewed in Washington, May 4, 2021. In a report to Congress released Friday, Dec. 3, the Treasury Department cited China for a number of failing that are preventing its trading partners from gaining full knowledge of just how it is managing its currency. (AP Photo/Patrick Semansky, File)

WASHINGTON (AP) — The Biden administration will not designate any country as a currency manipulator, but it did name China, Vietnam and Taiwan among the nations that have failed to live up to global agreements not to use their currencies to gain unfair trade advantages.

In a report to Congress released Friday, the Treasury Department cited China for a number of failures that prevent trading partners from gaining full knowledge of how it is manages its currency.

The Treasury plans to closely monitor the foreign exchange activities of China's state-owned banks to get a clearer picture of China's currency practices, according to the report.

Vietnam and Taiwan have violated a number of criteria that would justify naming them as currency manipulators and both will be watched closely in coming months to see what improvements they make in their currency practices, the report said.

The new report placed 12 nations on a monitoring list for increased scrutiny. The 12 are China, Japan, South Korea, Germany, Ireland, Italy, India, Malaysia, Singapore, Thailand, Mexico and Switzerland. All the nations with the exception of Switzerland were on the monitoring list in the last currency report in April.

“Treasury is working relentlessly to promote a stronger and more balanced global recovery that benefits American workers, including through closer engagement with major economies on currency-related issues," said Treasury Secretary Janet Yellen in a prepared statement.

Being named as a currency manipulator under U.S. law does not carry any immediate penalties but it does require Treasury to engage in negotiations with the foreign country in an effort to get it to alter its currency practices.

If those negotiations fail, the administration can impose trade sanctions. Those sanctions can be challenged by countries before the World Trade Organization.