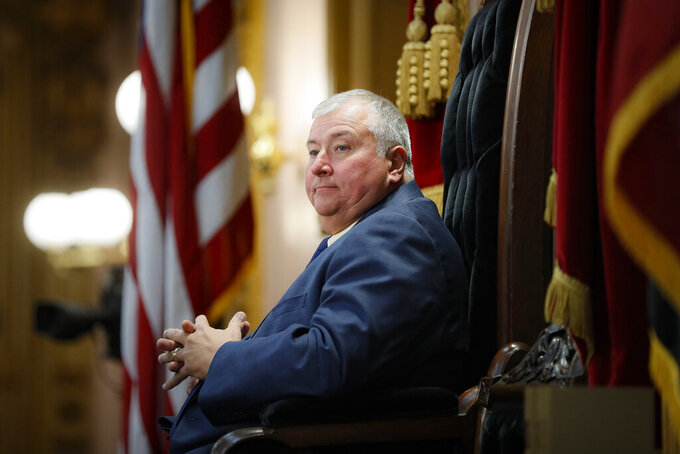 John Minchillo, ASSOCIATED PRESS
FILE - In this Wednesday, Oct. 30, 2019, file photo, Republican Ohio state Rep. Larry Householder sits at the head of a legislative session as Speaker of the House, in Columbus. Householder is charged in a $60 million bribery case, alleging he helped a $1 billion nuclear plant bailout. The 2020 arrests of Householder and four associates in connection with the scheme have rocked politics and business across Ohio. (AP Photo/John Minchillo, File) 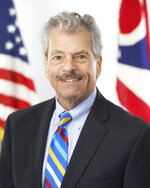 Legislative Director Dan McCarthy cited “the pace and grind” of the job and referred to predecessors who warned him against serving more than two years.

“I know I've run quite a bit over my two year commitment but I think now is the right time to resign as your Legislative Director,” McCarthy wrote in his letter to the Republican DeWine.

Federal prosecutors charged five individuals last year, including the then-House speaker, with orchestrating a $60 million bribery scheme to assure the 2019 passage of a bill bailing out two nuclear power plants. Prosecutors say the scheme also involved killing efforts to put a petition on the ballot to overturn the bailout.

The power plants were operated at the time by a wholly-owned subsidiary of Akron-based FirstEnergy Corp.

McCarthy is a former FirstEnergy lobbyist who was president of one of the dark money groups, Partners for Progress, which has been implicated in the alleged bribery scheme. McCarthy has said his actions were legal and DeWine's office has said it has no indication McCarthy is a target of the probe, which continues.

Details in July court filings said Partners for Progress appeared to be independent while actually being controlled by FirstEnergy. FirstEnergy admitted to hand-picking the organization’s three leaders, including McCarthy, and funneling $15 million in FirstEnergy cash through the nonprofit to another dark money group, Generation Now.

Generation Now pleaded guilty to its role in the scheme in February. In addition, FirstEnergy has admitted to using dark money groups to fund the bailout effort, and agreed to pay $230 million and other conditions so prosecutors won’t forge ahead with a criminal case against the company.

Two of five men charged in the scheme have pleaded guilty and await sentencing. Two more, including ex-Speaker Larry Householder, have pleaded not guilty and are fighting the charges. A fifth man killed himself with charges pending against him.