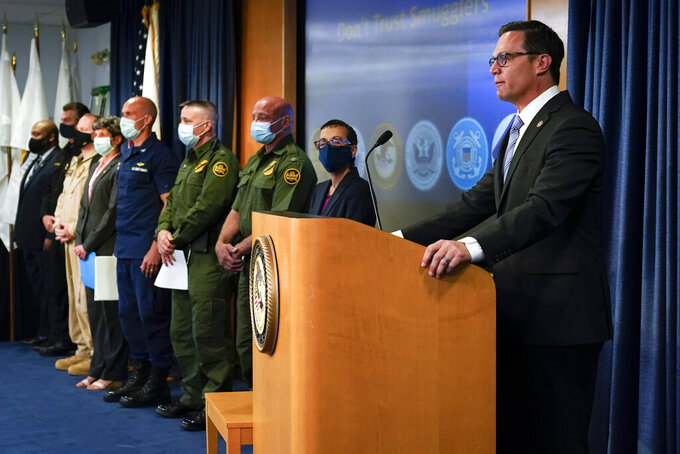 SAN DIEGO (AP) — A man alleged to have captained a boat that fell apart and killed three people off the San Diego coast has been indicted by a federal grand jury in what authorities said Wednesday was a growing number of deaths in migrant smuggling attempts along California's border with Mexico.

Antonio Hurtado pleaded not guilty Tuesday to smuggling charges, weeks after he was arrested in the May 2 wreck when a cabin cruiser packed with 33 people smashed on the rocky shore of San Diego's Point Loma peninsula.

Hurtado's age and citizenship were not disclosed in court filings but authorities have said the captain was a U.S. citizen. His attorney, Melissa Bobrow, didn't immediately respond to a request for comment late Wednesday afternoon.

Exactly two months earlier, 13 Mexican and Guatemalan citizens in an overloaded SUV were killed when struck by a tractor-trailer in the remote desert community of Holtville.

Authorities say 25 migrants died in smuggling attempts on California's border with Mexico from October through April, compared to 29 for the preceding 12-month period. Representatives of several law enforcement agencies pleaded with migrants at a news conference Wednesday to avoid the dangerous journey, saying smugglers' only concern was profits.

Survivors of the May 2 boat wreck told investigators they paid $15,000 to $18,500 to be smuggled from Mexico. Migrants smuggled in a makeshift boat that ran into trouble near San Diego's La Jolla shores May 20, resulting in one fatal drowning, told authorities they paid $12,000 to $15,000.

In March, Neil Edwin Valera, a U.S. citizen, was sentenced to five years in prison in connection with the deaths of three Chinese migrants, including a mother and her 15-year-old son, who were found in the trunk of his BMW.

“Smugglers will leave you in a trunk or a hidden compartment and they will not listen to your screams if you are in distress,” said Randy Grossman, acting U.S. attorney in San Diego. “They just want their fees.”