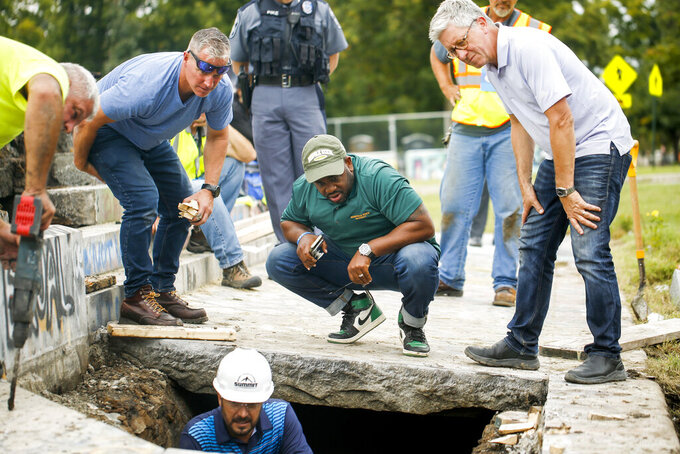 Shaban Athuman, ASSOCIATED PRESS
Devon Henry, center, looks on as crews work to retrieve a time capsule from the Robert E. Lee pedestal on Monument Ave. in Richmond, Va. Thursday, Sept. 9, 2021. After removing the Robert E. Lee monument in Richmond and nearly two dozen other statues across the city and state, Devon Henry is seeking to raise money for charity by selling digital artwork inspired by their removal in the cryptocurrency market. CryptoFederacy, Henry’s newest venture, launched its first series of artwork last month with the goal of raising a total of $13 million for various nonprofit groups and social justice causes, including affordable housing development, gun violence prevention, mental health care access and voting rights. (Shaban Athuman/Richmond Times-Dispatch via AP)

RICHMOND, Va. (AP) — After removing the Robert E. Lee monument in Richmond and nearly two dozen other statues across the city and state, Devon Henry is seeking to raise money for charity by selling digital artwork inspired by their removal in the cryptocurrency market.

The 45-year-old CEO of Team Henry Enterprises, the contracting firm that the state and cities of Richmond and Charlottesville hired to take down Confederate monuments, said he founded the new company after reflecting on what he should do next after participating in the historical endeavor.

“The statues are down. But what’s next?” Henry said in an interview. “It’s about keeping the momentum going and keeping up the awareness of what those statues have meant — and taking a negative narrative and turning it into something positive.”

Richmond Mayor Levar Stoney and former Virginia Gov. Ralph Northam ordered the removal of the Confederate monuments in the former capital of the Confederacy in 2020 amid nationwide protests following the police killing of George Floyd. The orders came after several other states and localities around the country made similar moves to take down tributes to the Confederacy after a white supremacist murdered nine Black parishioners in a Charleston, S.C., church five years earlier.

Henry said he was apprehensive when the governor’s chief of staff first approached him about removing the Lee monument. He was inclined to take it but considered the fatal white supremacist rally in Charlottesville in 2017 and how a contractor’s car in New Orleans was firebombed.

Henry, who is Black, said he consulted his wife and children. They discussed what it would mean to remove the monuments that generations of people felt had represented oppression and racism and the risks that it might involve.

“We came to the conclusion that we have to do this,” he said. “We have to take these matters in our hand and be courageous in doing so.”

Henry said the goal of CryptoFederacy is to capitalize on the rise of novel technology such as Web3 and non-fungible tokens (NFTs) to raise money for social justice causes.

Founded earlier this year, the organization’s first project is The Thirteen Stars, a collection of digital art that includes 3D models of the Confederate monuments overlaid with newspaper headlines and illustrations of the statues with graffiti surrounding them.

Anthony Bartley, who goes by the artist name Fading Royalty, created most of the artwork for the collection.

Currently based in St. Louis, where he attended Washington University, Bartley, 24, said he was thrilled to participate in the project after curating a book of photography from the 2020 protests. Proceeds of the book sales went toward the NAACP legal defense fund.

Creating the artwork, he said, “brought me back to being in the midst of doing something bigger than myself. And that felt good to be part of it, especially knowing that the proceeds are going to charity.”

The name of the collection is a reference to the 13 stars on the Confederate “Southern Cross” battle flag as well as each of the 13 causes to which CryptoFederacy intends to allocate $1 million with the proceeds from the sale of the artwork.

Michael Garvey, an economist and artist involved in the project, created three pieces for the collection. One of them depicts an alien aircraft “abducting” the statue of Robert E. Lee, while another shows all of the monuments strewn in an arcade claw machine game.

Garvey, 33, said his work is meant to symbolize progressing into “the future” and how the project is intended to claim the monuments.

“It can be like taking some of the oppression ... caused by the culture around the statues and taking money from this NFT project to relieve some of that pressure on us,” he said.

Henry said CryptoFederacy is still engaging potential nonprofit and charitable partners for the project but has already reached agreements with the Richmond-based Better Housing Coalition and the Thurgood Marshall College Fund to support scholarships to historically Black colleges and universities.

Other artists have also sought to raise money from the sale of NFTs recently. For example, Russian feminist art collective and punk rock group Pussy Riot earlier this year helped raise over $7 million in support of Ukraine during the Russian invasion of the country, according to media reports.

Patrons can bid on The Thirteen Stars artwork using the cryptocurrency ethereum. The auction website for the artwork says the minimum bid for each piece is 105 wrapped ether, which is the equivalent of about $182,000.

In addition to acquiring ownership rights to the artwork through the blockchain, a sort of digital public ledger that’s the basis of cryptocurrencies and NFT ownership, buyers will receive a small physical artifact from one of the monuments.

Henry said he chose to embrace the novel cryptocurrency market and new art platform as a way to also encourage Black entrepreneurship in an emerging market.

“I just feel that at some point, it’s going to be a part of our lives,” he said. “I saw a lot of the stuff out there in the NFT space, and I thought this could be something more meaningful and historic that people can get behind and understand.”

Henry said he expects auction for the artwork will remain open online until the end of August. He said CryptoFederacy will also release a second collection of NFT artwork later this summer.