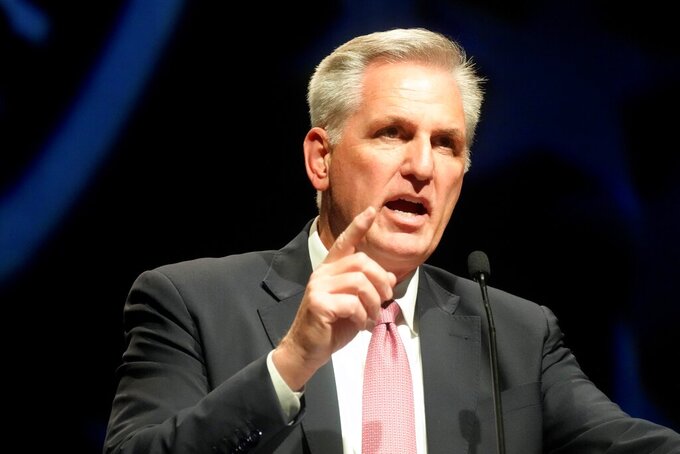 Republican politicians and candidates are distorting how a major economic bill passed over the weekend by the Senate would reform the IRS and affect taxes for the middle class.

The “ Inflation Reduction Act,” which awaits a House vote after passing in the Senate on Sunday, would increase the ranks of the IRS, but it would not create a mob of armed auditors looking to harass middle-class taxpayers, as some Republicans are claiming.

While experts say corporate tax increases could indirectly burden people in the middle class, claims that they will face higher taxes are not supported by what is in the legislation.

A look at some of the claims about the package that emerged from a deal negotiated by Senate Majority Leader Chuck Schumer, D-N.Y., and Sen. Joe Manchin, D-W.Va.:

THE FACTS: That's misleading. Last year, before the bill emerged, the Treasury Department had proposed a plan to hire roughly that many IRS employees over the next decade if it got the money. The IRS will be releasing final numbers for its hiring plans in the coming months, according to a Treasury official. But those employees will not all be hired at the same time, they will not all be auditors and many will be replacing employees who are expected to quit or retire, experts and officials say.

The IRS currently has about 80,000 employees, including clerical workers, customer service representatives, enforcement officials, and others. The agency has lost roughly 50,000 employees over the past five years due to attrition, according to the IRS. More than half of IRS employees who work in enforcement are currently eligible for retirement, said Natasha Sarin, the Treasury Department's counselor for tax policy and implementation.

Budget cuts, mostly demanded by Republicans, have also diminished the ranks of enforcement staff, which fell roughly 30% since 2010 despite the fact that the filing population has increased. The IRS-related money in the Inflation Reduction Act is intended to boost efforts against high-end tax evasion, Sarin said.

The nearly $80 billion for the IRS in the bill will also pay for other improvements, such as revamping the agency's technology, said Janet Holtzblatt, a senior fellow at the Tax Policy Center and former Treasury official.

The Treasury says it will hire experienced auditors and workers who will improve taxpayer services, and that audit rates for those earning less than $400,000 are not expected to rise in relation to historic norms.

So that's a long way from hiring 87,000 “agents” to go after average people in the United States, as the GOP claims have it. In any case, the bill has no mandate to hire that many people.

REP. MARJORIE TAYLOR GREENE. R-Ga.: “It’s going to hire 87,000 new IRS agents and it’s going to arm — as in guns, you know, Democrats are always upset about guns — 70,000 of these IRS agents.” — at the Conservative Political Action Conference, in an interview with the conservative Canadian news magazine The Post Millennial.

THE FACTS: That’s false. The bill will not create any such army, officials and experts say. Only some IRS employees who work on criminal investigations carry firearms as part of their work.

A division of the IRS called criminal investigation serves as the agency’s law enforcement branch. Its agents, who work on issues such as seizing illicit crypto currency and Russian oligarchs' assets, carry weapons, Sarin said.

There were just more than 2,000 such special agents working at the IRS in 2021, according to agency documents. The branch will get money from the Inflation Reduction Act, but the bulk of the dollars will go toward other areas, according to Sarin.

The bill does not designate money specifically for a large number of armed IRS employees.

THE FACTS: Nothing in the bill raises taxes on people earning less than $400,000, contrary to Laxalt's claims. There are no individual tax rate increases for anyone in the bill, experts say.

It's possible, though, that the bill's new corporate taxes, including a minimum 15% tax for large corporations, could cause indirect economic impacts. A report from the Joint Committee on Taxation said some people who make less than $400,000 might see such impacts.

“Economists are generally in agreement that the corporate income tax is borne not just by the businesses, but also by shareholders and by workers," Holtzblatt said. “So that tax that gets imposed on the corporation, some of that might end up getting shifted to workers in the form of lower wages."

Added Garrett Watson, a senior policy analyst at the Tax Foundation: “Distinguishing between whether lower after-tax incomes happen because of a direct tax hike or indirect incidence may be a distinction without a difference for many households.”

Nevertheless, supporters of the bill did not vote for tax increases on people earning $30,000, as Laxalt claimed.