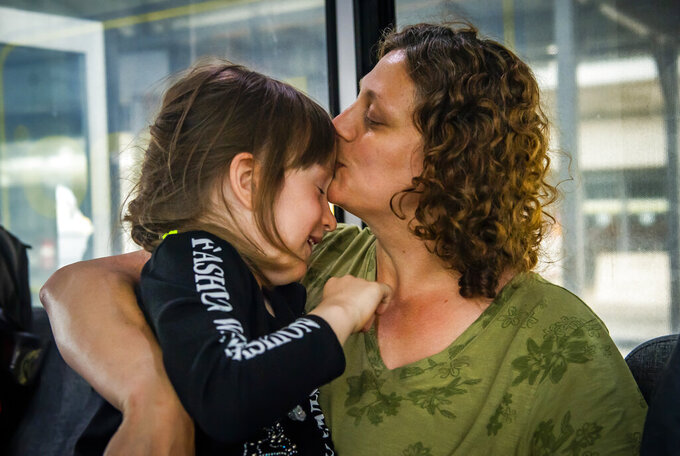 Katina Zentz, ASSOCIATED PRESS
Kristie Graves gives her 6-year-old adopted daughter, Bridget, a kiss while on a bus at Dulles International Airport on Thursday, May 12, 2022, near Dulles, Va. The family arrived at the airport after going to war-torn Ukraine to finalize the adoption of Bridget and bring her home. (Katina Zentz/The Frederick News-Post via AP)

FREDERICK, Md. (AP) — When the airplane’s wheels touched down at Dulles International Airport on the afternoon of May 12, 6-year-old Bridget became a U.S. citizen.

Her adoptive parents left Frederick County and crossed war-torn Ukraine to get to her.

Bridget was born prematurely via surrogate in Ukraine to biologically American parents who decided they did not want her. She has cerebral palsy and club feet and can’t walk on her own.

Over a year ago, Phil and Kristie Graves, of Brunswick, saw Bridget’s photo on an adoption website. They already had four children, and looking at Bridget’s face, knew she was their fifth.

In March, the Graveses told the News-Post they were not sure when they would reunite with Brizzy, who they met in person in December 2021.

They worried what would become of their adoption if Russia took over Ukraine.

Then, in mid-April, a nurse named Marina Boyko who befriended Brizzy told the Graveses that a judge would hear their case. But the judge wanted Phil and Kristie there in person — in the country where missiles fall from the sky and thousands of Ukrainians have been killed.

“We just said, ‘When can we come?’” Phil told the News-Post.

The couple left for Warsaw, Poland, on April 26. On May 12, they flew home with Brizzy by their side. They had to jump through legal hoops and fill out a mountain of paperwork before they were cleared to head home.

“I’m so happy to be back,” Kristie said as she pushed Brizzy in a red stroller through the airport.

The family awoke at 4:45 am. Warsaw time to reach Dulles by the afternoon. Their journey to Ukraine and back involved travel by plane, train, bus and car.

Bombed-out buildings filled the landscape, they recalled. One day, missiles exploded roughly half a kilometer from where they were located. Phil said they could see the smoke.

But on that Thursday, the Graveses did not dwell on their past proximity to danger. Their focus was entirely on Brizzy.

Donning a sparkly shirt with an image of the Eiffel Tower on the front, Brizzy swiveled her head as her mother pushed her stroller through the airport.

When they reached a shuttle bus, Kristie lifted Brizzy up and carried her aboard. Phil helped move their luggage, including a bright pink suitcase full of Brizzy’s belongings.

Brizzy chatted excitedly in Russian — a language her new parents do not speak. With a few gestures and Google Translate, Phil said, they figure out what Brizzy wants.

The parents quickly learned the Russian words for “no” and “sleep,” which the excitable youngster uses when she does not want to take a nap.

Brizzy grew restless on the shuttle to the rental car service, squirming in her mother’s lap. Kristie whispered reassuring words in her ear.

In the taxi, Brizzy clung to a pillow that looked like a shrimp.

Her parents are still learning what she likes. Her suitcase of belongings included a doll and Hello Kitty sunglasses, Kristie said.

The Graveses said they looked forward to settling Brizzy in at home.

The travel may be over, but there’s more hurdles to come. Doctor’s appointments await. Brizzy will need to be evaluated before starting school. There are four siblings to bond with and a new language to learn.

Phil, who is senior pastor at First Baptist Church in Brunswick, said there were many times in the past few weeks he questioned God’s plan.

“Now, I feel like it’s Christmas morning,” he said, “and all that frustration and anticipation was worth it.”