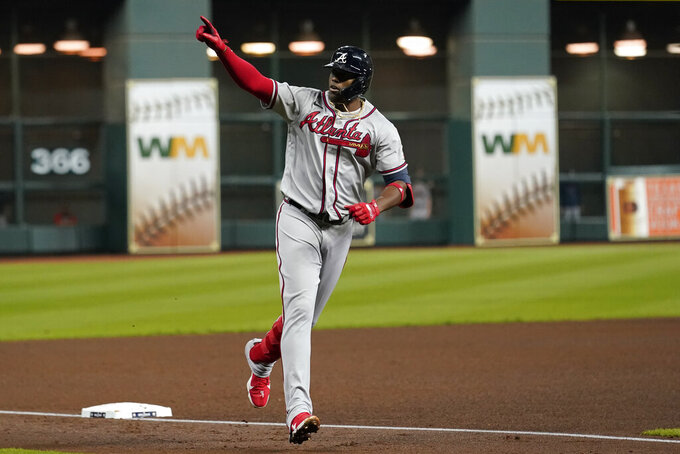 HOUSTON (AP) — The Latest on Game 6 of the World Series (all times local):

The Atlanta Braves have won their first World Series championship since 1995, hammering the Houston Astros 7-0 in Game 6.

Jorge Soler hit his third home run of the Series, a go-ahead three-run drive in the third off Luis Garcia, and Freddie Freeman and Dansby Swanson also connected.

Steadied by 66-year-old manager Brian Snitker, an organization man for four decades, the underdog Braves won the franchise’s fourth title, about 9 1/2 months after Hall of Fame slugger Hank Aaron died on Jan. 22 at 86.

The Atlanta Braves are three outs from their first World Series title since 1995.

The Braves lead the Astros 7-0 after eight innings and are ready to turn the ball over to closer Will Smith for the ninth. If the lead holds, it will be the most lopsided Series clincher since Kansas City’s 11-0 win over St. Louis in Game 7 in 1985.

Atlanta went down in order in the top of the eighth, and Braves manager Brian Snitker sent left-hander Tyler Matzek out for a second inning in the bottom of the frame.

Matzek struck out Aledmys Díaz, Marwin Gonzalez and Jose Altuve in order, ending a memorable postseason for a pitcher who was out of pro ball as recently in 2019 following a battle with the yips. Matzek has a 1.72 ERA in 13 appearances during this run.

Freddie Freeman hit a solo home run in the seventh inning and the Atlanta Braves headed into the eighth with a 7-0 lead over the Houston Astros.

Atlanta reliever Tyler Matzek pitched around a leadoff single in the bottom of the seventh, leaving the Braves six outs from their first World Series title since 1995.

Freeman, the longtime Braves star and 2020 NL MVP, also had an RBI double in the fifth. He homered to center field with two outs in the seventh off reliever Ryne Stanek.

The slugger also went deep during Game 5 back home in Atlanta.

Braves starter Max Fried was removed after six shutout innings. He gave up four hits, struck out six and walked none.

Max Fried is the first starter to get an out in the sixth inning of this World Series, and the Braves lead Houston 6-0 with nine outs between them and a championship celebration.

Fried retired 17 straight batters before Michael Brantley reached on an infield single with two outs in the sixth -- Brantley had been the last batter to reach, too, when he stepped on Fried’s ankle on a close play at first in the first inning.

Fried opened the inning by striking out Martín Maldonado and getting a popup from Jose Altuve. After Brantley reached, he struck out Carlos Correa on a fastball that sailed to the backstop, requiring a slick play by catcher Travis d’Arnaud to retrieve it and relay to first for the out.

The Braves left-hander has thrown 74 pitches, setting him up to pitch deep into Atlanta’s potential clinch. There hasn’t been a complete game in the postseason since Justin Verlander did it for Houston in Game 2 of the 2017 AL Championship Series. It hasn’t been done in the World Series since Kansas City’s Johnny Cueto in Game 2 in 2015.

The Braves threatened in the top of the inning with singles by Adam Duvall and Ozzie Albies. Phil Maton struck out d’Arnaud, and Dansby Swanson grounded out to end the inning.

Dansby Swanson hit a two-run homer in the fifth inning, Freddie Freeman added an RBI double and the Atlanta Braves have opened a 6-0 lead over Houston as they close in on their first championship since 1995.

Max Fried is rolling along for the Braves after escaping a jam in the first. Pitching with intense purpose and throwing his fastball more than during his previous two starts, when he struggled, the left-hander has allowed three hits and struck out four in five sharp innings.

He fanned Kyle Tucker and Alex Bregman in a 1-2-3 fifth, leaving Fried at 52 pitches. After the first two Astros hitters reached base, the last 15 have made 15 outs -- including a pair of double-play grounders.

Ozzie Albies walked to start the fifth. One out later, Swanson hit his second homer of the Series -- both off Cristian Javier -- to make it 5-0.

Swanson, the top overall pick in the 2015 amateur draft by Arizona, was the Most Outstanding Player at the 2014 College World Series as he helped Vanderbilt win a national championship.

Jorge Soler, who launched a three-run homer in the third, walked with two outs against lefty Blake Taylor and scored from first base when Freeman doubled off the left-center fence.

Atlanta starting pitcher Max Fried has gotten 12 outs over 12 batters for the Braves, who lead 3-0 in Houston after four innings in pursuit of their first World Series title since 1995.

After Carlos Correa had a bloop hit drop in shallow right-center to start the fourth before he was retired when Yordan Alverez grounded into a double play. Yuli Gurriel, the AL batting champion this season, then grounded out.

Cristian Javier, the third Astros pitcher, took over in the fourth and struck out Austin Riley and Joc Pederson as part of his own 1-2-3 inning.

Javier was back on the mound for the first time since allowing back-to-back homers to Dansby Swanson and Jorge Soler in the seventh inning of Game 4 on Saturday night, when Atlanta won 3-2 and made him the loser pitcher.

Jorge Soler’s three-run blast has given the Braves a 3-0 lead in the third inning. And if it holds it might have earned him World Series MVP.

Ozzie Albies got Atlanta’s first hit of Game 6 with a single on a grounder to right field to start the third inning.

Travis d’Arnaud hit a fly ball to center field that José Siri grabbed for the first out. Dansby Swanson followed with a long fly ball to left field that Michael Brantley caught on the track just in front of the wall for the second out.

Luis García then walked Eddie Rosario, which prompted a visit to the mound from pitching coach Brent Strom.

There was a full count when Soler connected on his third home run of the Series to give the Braves the lead. The soaring 446-foot shot that sailed over the wall in left field brought eight of his teammates out of the dugout to celebrate as he rounded the bases.

Houston manager Dusty Baker shook his head as he watched the Braves take another huge early lead. The Astros fell behind 4-0 after a grand slam by Adam Duvall in the first inning of Game 5 before rallying for the 9-5 win.

The homer chased García. Brooks Raley took over and Freddie Freeman grounded out for the third out of the inning.

Martín Maldonado singled to start the bottom of the third. Max Fried retired Jose Altuve before Brantley grounded into a double play to end the inning.

Fried appeared to be OK after getting spiked on the right foot when trying to cover first base on a strange play in the first. The lefty has retired six in a row since allowing a leadoff single to Jose Altuve in the first, and then getting stepped on by Michael Brantley.

Kyle Tucker opened the Astros second with a grounder, before Alex Bregman fouled out down the right field line and Jose Siri flew out.

After Riley struck out, Garcia wrapped up his second consecutive 1-2-3 inning when Adam Duvall grounded out and Joc Pederson hit a routine flyball.

The Houston Astros stranded runners at second and third base in the first inning of World Series Game 6 against the Atlanta Braves’ Max Fried.

Jose Altuve reached on an infield single to the shortstop hole leading off, and Michael Brantley hit a slow roller to first baseman Freddie Freeman. Fried took an indirect route to the base, and Brantley stepped on the pitcher’s foot and went past the bag without touching it. The Braves did not ask for a video review while checking that Fried was OK.

Fried struck out Carlos Correa, Yordan Álvarez advanced the runners with a grounder and Fried struck out Yuli Gurriel with a 98.4 mph fastball, his fastest pitch of the year.

Luis Garcia opened the first by retiring three straight batters for Houston, throwing nine of 12 pitches for strikes and reaching 96.5 mph, up from his 93.5 mph average during the regular season.

He retired Eddie Rosario on a soft fly toward the right field line, with 6-foot-4 Kyle Tucker making a diving catch 275 feet from home plate.

Garcia struck out Jorge Soler on a full-count cutter and Freeman on a fastball.

Country music artist Carly Pearce performed a rousing rendition of the National Anthem before the start of Game 6, where Minute Maid Park’s retractable roof was open on a beautiful 72-degree night.

Local furniture store owner Jim McIngvale, better known as Mattress Mack, who has gained celebrity status for his wild promotions and philanthropy in the community, joined a rally nun on the field as she threw out the ceremonial first pitch.

The rally nuns, from the Dominican Sisters of Mary Immaculate Province, got their name when they began attending games during the ALCS and Houston won every game they attended.

McIngvale has a lot riding on this Series. Those who bought a mattress priced at $3,000 or more at one of his three Gallery Furniture stores before the series started will get their money back if the Astros win the Series.

To hedge that bet, the 70-year-old made a huge wager on the Astros to win it all. McIngvale has said he placed a $3.2 million bet that will pay $36 million if Houston earns another title.

Scott wore a gray Astros jersey with his nickname “La Flame” printed on the back with the No. 1.

Braves manager Brian Sniker said he dropped Ozzie Albies from second to seventh in the batting order “just to change the look.”

Albies was 3 for 18 with three walks and no extra-base hits in the first five games. He had not hit lower than fifth during the regular season.

Freddie Freeman was moved back from second to third.

“I kind of want (Jorge) Soler to split the lefties, if nothing else,” Snitker said. "I don’t think it matters to Freddie whether he hits two or three. He’s going to get up in the first inning regardless. I think Jorge has been having some really good at-bats. And just kind of balance things out a little bit.”

Eddie Rosario was back in the Atlanta Braves’ leadoff spot against right-hander Luis Garcia and Jorge Soler moved to designated hitter in Game 6 of the World Series against Houston.

Game 2 loser Max Fried was on the mound.

Astros manager Dusty Baker dropped Bregman down from third and moved Correa up from fifth for Game 5. Bregman hit an RBI double that started Houston’s comeback from a four-run deficit and Correa had three hits and two RBIs.

Right-hander Luis Garcia was on the mound with three days’ rest after lasting 3 2/3 innings and taking the loss in Game 3.

Major League Baseball planned to have the retractable roof open at Minute Maid Park for Game 6 of the World Series.

The roof was closed for Atlanta’s opening win last week and remained closed for batting practice the next day, then was open for Houston’s Game 2 win.

It was 78 degrees when early batting practice started Tuesday and skies were mostly clear.

Atlanta Braves infielder/outfielder Ehire Adrianza was placed on the postseason paternity list ahead of World Series Game 6 on Tuesday night and replaced on the active roster by infielder Johan Camargo.

Adrianza is 0 for 2 in the Series, making two pinch hit appearances. He will be allowed to return should the Series extend to a Game 7.

Camargo was 0 for 4 in the NL Championship Series.