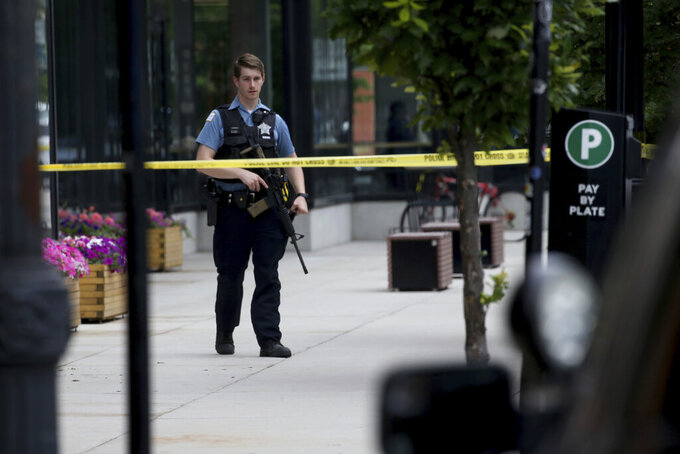 Antonio Perez, ASSOCIATED PRESS
Chicago police investigate in the 1300 block of West Taylor Street after officials said an officer was shot multiple times while responding to a call of a domestic disturbance in a University Village neighborhood apartment building, Friday morning, July 1, 2022, in Chicago. (Antonio Perez/Chicago Tribune via AP)

CHICAGO (AP) — A Chicago police officer responding to a domestic disturbance at an apartment building was repeatedly shot as he stepped off an elevator Friday, hours after two men were killed in a separate shooting downtown, authorities said.

Brown praised a University of Illinois-Chicago police officer who transported the man in his patrol car, “likely saving his life.”

“We are asking for prayers for this officer,” Brown said.

Police were called to an apartment building for help in a domestic disturbance.

“As soon as they got off the elevator to go to the apartment, they were fired upon by the offender,” Brown said, adding that officers didn't shoot their guns.

The man, an ex-convict, was arrested, he said.

“We have seen over the last two years a significant surge in domestic violence-related calls but also domestic-related homicides and shootings. ... It is a huge public health and public safety issue," said Mayor Lori Lightfoot, who joined Brown at the hospital.

Earlier Friday, about 1:45 a.m., someone opened fire during an argument in downtown Chicago, killing two men and wounding three other people who were leaving a business, police said.

Two men in their 20s were killed, while the wounded were reported in good condition. No one was in custody.

The shootings come amid a surge in deadly violence in Chicago in recent years, and follow other downtown-area shootings this year, including one that left two people dead and seven injured outside a fast-food restaurant and a shooting in Millennium Park that killed a teen.

So far this year, however, the number of homicides in Chicago is down from the same period in 2021, according to police.