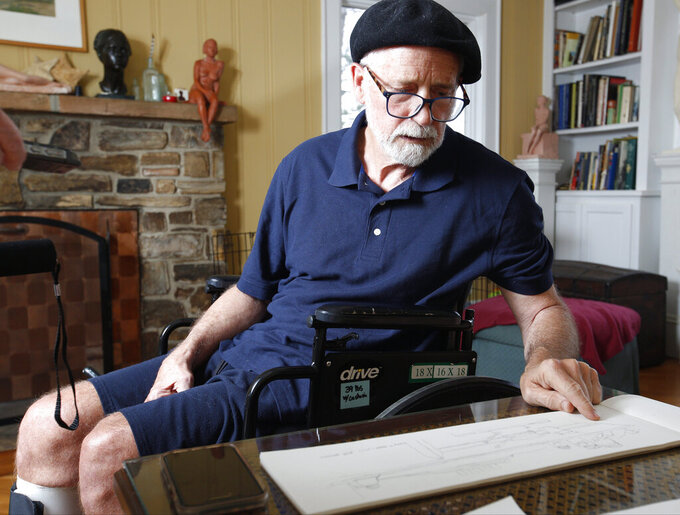 Woody Marshall, ASSOCIATED PRESS
Artist Jim Barnhill works at his home in Greensboro, N.C., on Monday, March 7, 2022. Some of his paintings and sculpture — created before his stroke — appear in the current exhibition downtown at GreenHill. Titled “H20,” it focuses on environmental stewardship. (Woody Marshall/News & Record via AP) 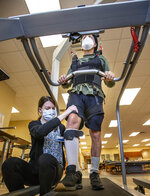 When Michael Collins saw the customer at Lowe’s fall to the floor, he rushed to the man’s aid.

Collins immediately recognized the signs of a stroke. The man’s speech was slurred. He couldn’t respond to questions about his name or pain. He couldn’t move his arms.

A Lowe’s sales specialist, Collins quickly summoned an assistant manager in the store. “Get the ambulance here real quick,” Collins recalled saying, “because we had a man that was having a stroke.”

While Collins knew stroke signs, he didn’t know the man exhibiting them on that June day last year.

It was local sculptor and painter Jim Barnhill.

Barnhill had become known for creating the February One monument at N.C. A&T where he has taught for 25 years, the General Greene statue on a city roundabout and Minerva on the UNCG campus.

He has sculpted a bust of Pedro Silva, longtime executive director of the N.C. Shakespeare Festival in High Point.

He has created pieces beyond Guilford County, and had several more in the works at the time of his stroke on June 23, 2021.

Collins and other Lowe’s employees sprung into action that day. They called 911 and tried to keep Barnhill comfortable until the ambulance arrived to take him to Cone Hospital.

“The thing that was going through my mind was that I needed to react real fast,” Collins said. “The longer we wait, the worse the conditions would be and the longer the rehab would be.”

In those 10 months, Barnhill, 66, has come a long way from hospital to home.

He still wears a brace on his right leg. But he has progressed from a wheelchair, to a walker, to walking with a cane.

He’s not driving. Others drive him out to breakfast and lunch with neighbors and friends weekly.

He can understand what people say. But his own speech has returned slowly and haltingly.

Although his “yes,” “yeah,” “yup” and “no” are easy to understand, other words can be more difficult.

“He has not lost any of his mental faculties or his ability to understand or reason,” said retired ophthalmologist Dr. Wilson McWilliams, who is married to Barnhill’s sister Katherine. They drive from Pinehurst to share caregiving duties with Barnhill’s longtime partner, Edie Carpenter, and others.

“I think he knows what he wants to say, but it doesn’t come out as he wants it to, sometimes,” McWilliams said.

Barnhill practices his speech via Zoom with Club Aphasia of The Triad. Led by speech-language pathology faculty members at UNCG, the aphasia community conversation group caters to those who struggle to comprehend or formulate language because of brain injury.

Twice a week, he goes to Cone Health Neurorehabilitation Center for physical therapy with Chloe Gilgannon and Emily Parker.

During a recent session, he walked on a treadmill, climbed slowly up and down a few steps, even walked outside with assistance.

“Very nice, Jim,” Gilgannon says after he walks down a few steps.

He can’t sketch with his dominant right hand.

So he has taught himself to draw and write with his left — no easy feat for many who are right-handed.

“He is pretty inspiring,” said Carpenter, director of artistic and curatorial programs at GreenHill Center for North Carolina Art in Greensboro Cultural Center.

Barnhill hasn’t been able to sculpt again yet.

Asked if he plans to sculpt again, he replies “yeah.” Have any of his medical caregivers said when? “I don’t know,” Barnhill replies.

Some of his paintings and sculpture — created before his stroke — appear in the current exhibition downtown at GreenHill. Titled “H20,” it focuses on environmental stewardship.

The “H2O” exhibition originally had been scheduled for two years ago. But the COVID-19 pandemic postponed it until now.

A few days before the opening, Barnhill came to GreenHill with Carpenter and Denisa Simmons, one of his caregivers.

A whale that Barnhill carved from crabapple wood, created in 1993, hangs from the ceiling of the GreenHill gallery.

“Yeah!” Barnhill says in agreement. “Big or go home,” he adds, slowly pronouncing each word of the popular phrase.

One from 2012 depicts the oil tanker Exxon Valdez. It ran aground in 1989 in Prince William Sound, Alaska, spilling 11 million gallons of oil.

What does it feel like to show his work to the public?

“Genius!” Barnhill said, then laughs with the small crowd around him.

“I’ve never looked at art until I met Jim,” Simmons said. “When I walked in here, it just resembled him. It’s strong.”

Three days later, Barnhill returned to the exhibition opening. He listened as Carpenter explained his work to visitors.

His A&T students have not forgotten him, either. On April 29, Barnhill was honored at the exhibition for senior art students, held at the African American Atelier in the cultural center.

The foundry serves artists from around the world.

Barnhill created the pieces in plaster. From here, Carolina Bronze follows a complex set of steps.

It makes molds from the plaster, then from the molds makes wax copies of the originals.

From the wax copies, it will cast the pieces in bronze, using the “lost wax” process.

“Jim normally makes his own plaster molds,” co-owner Melissa Walker said. “However, we made this batch because of his stroke.”

The sculpture will be displayed this summer in GreenHill’s “Presence: A Figurative Art Survey,” another exhibition postponed from 2020.

Others have driven Barnhill to the foundry. Walker, who owns Carolina Bronze with her husband, Ed, has watched Barnhill’s improvement.

She calls Barnhill “an outstanding sculptor” and “a great guy.”

“We were just devastated to hear about his stroke,” Walker said. “We are hoping he makes a full recovery.”

The day before Barnhill suffered the stroke, Carpenter didn’t notice anything amiss.

He had recently returned from a sailing trip. They dined together.

When Carpenter saw him the next day, Barnhill was in a hospital bed.

“At first, it was very scary,” Carpenter said. “We knew that the injury was pretty severe.”

Barnhill had an ischemic stroke, in which there is insufficient blood flow to the brain.

“People with atrial fibrillation are put on anticoagulants to try to prevent blood clot formation,” said McWilliams, his brother-in-law. “The question was whether he was taking his anticoagulants properly.”

Barnhill spent more than a month in intensive care and in-patient therapy before returning home. A bout with pneumonia brought him back into the hospital.

His atrial fibrillation is under control. This year, both he and Carpenter had a bout of COVID-19.

He resumed drawing while in the hospital.

At home, he’s surrounded by art he has created over the years.

And he’s surrounded by family and friends.

Carpenter, McWilliams, his sisters Katherine McWilliams and Becky Oxholm, caregivers from Hand and Heart and others have helped out.

“One thing that has saved Jim and aided his recovery,” Carpenter said, “is that he’s never been bitter.”

“Jim has always had a facility for reaching out to people, from the checkout person at the grocery store to his students,” Carpenter said. “Many former students remember him telling jokes in his studio classes or offering advice when they had a personal problem.”

Family and friends remain grateful to Dr. Katyucia de Macedo Rodrigues of Greensboro Radiology, the physician who treated him; Collins and others, for helping to save Barnhill’s life.

Later this year, Barnhill plans to resume teaching at Art Alliance, which offers classes in the cultural center. Dates have not been confirmed yet.

He will teach how to create art with the non-dominant hand, as he has done with sketching.

Collins, 66 and a Lowe’s sales specialist for 19 years, recognized him.

They embraced and shed some tears.