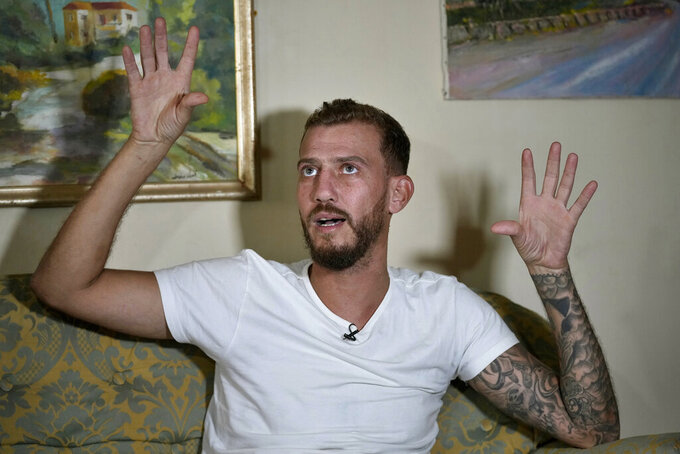 Bilal Hussein, ASSOCIATED PRESS
Jihad Michlawi, 31, speaks during an interview with The Associated Press at his home in the northern Beirut suburb of Burj Hammoud, Lebanon, Tuesday, Sept. 27, 2022. Michlawi is one of dozens of survivors from a migrant boat that left Tripoli, Lebanon heading towards Italy carrying over 100 Lebanese, Syrians, and Palestinians, that capsized near the Syrian coastal city of Tartus. At least 94 people were killed. (AP Photo/Bilal Hussein)

BOURJ HAMMOUD, Lebanon (AP) — Jihad Michlawi struggled to make ends meet as a chef in crisis-hit Beirut. The Palestinian had never considered taking a perilous journey across the Mediterranean Sea to Europe until friends who did so persuaded him to try.

Now, he's one of dozens of survivors from a capsized migrant boat that left Tripoli, Lebanon, last week heading toward Italy carrying some 150 Lebanese, Syrians and Palestinians.

“Some people who arrived told me that life in a European displacement camp was better than life in central Beirut, and that even the food was better,” Michlawi told The Associated Press on Tuesday.

The crowded boat capsized Sept. 21 off the coast of Tartus, Syria, just over a day after departing Lebanon. At least 94 people were killed, among them at least 24 children. Twenty people survived and the rest remain missing.

It was one of the deadliest ship sinkings in the eastern Mediterranean Sea in recent years, as more and more Lebanese, Syrians and Palestinians try to flee cash-strapped Lebanon to Europe to find jobs and stability. The U.N. High Commissioner for Refugees says risky sea migration attempts from Lebanon over the past year have surged by 73%.

Lebanon's economy has spiraled for a third year, with three-quarters of the population plunged into poverty and the Lebanese pound losing 90% of its value against the dollar.

Michlawi, 31, said he scraped together thousands of dollars and handed the money to a smuggler, whom he described as a “monster.” The Lebanese military has since arrested the smuggler.

Michlawi left the Lebanese capital for Tripoli at night, and a car with tinted windows drove him and five others to an orange grove, where he and dozens of others were crammed into pickup trucks covered with a tarp.

After reaching the coast and seeing the small boat that would carry them, many began to have second thoughts. “At this point we just thought we might as well go since we got there, but we probably should have considered the danger we put ourselves in,” he said.

The boat's engine began stalling intermittently, but when it completely stopped the following day, the tide started rocking the crowded vessel, as the anxious passengers began to panic, Michlawi said.

Michlawi and the others tried to move around the boat to keep it from tilting. The large waves knocked Michlawi into the wall and onto the floor several times. Breaking glass pierced his left foot.

Then, a large wave knocked dozens of people off the boat and into the water where they drowned. Michlawi recalled seeing the body of an infant who he said no older than two months. At that point, he and the others decided they ought to risk swimming for hours to get to shore.

Michlawi couldn't hold back his tears after recounting his unsuccessful attempt to save a 22-year-old Syrian named Ayman Kabbani who struggled to swim.

“He held me while he tried to swim with me, and whenever he would be tired, I would hold him and try to swim with one hand,” Michlawi said. “With all the salt water in our eyes and the heat of the sun, we could barely see.”

The young Syrian tried to boost Michlawi's morale, promising to treat him to lunch, buy new clothes, and get him a new phone with the money he has left once they reach Tripoli. But the Palestinian struggled to keep going.

Kabbani tried to swim on his own but couldn't keep up with Michlawi. “I heard him calling for me, but I would turn around and not see him,” Michlawi said. “At this point, I came to terms with the fact I was going to die and meet my maker, but then I saw the image of my father.”

Michlawi miraculously reached the coast of Tartus, Syria, where an elderly woman and man saw him. “I screamed, ‘Please don’t leave me' and fell on the sand," he said. “She gave me water, and I heard the man next to her say I was coughing blood, and then I passed out and woke up at the hospital in Tartus." He woke up covered in gashes and bruises.

Although safely back in Lebanon, Michlawi now faces an additional hurdle as he tries to find work because he is Palestinian.

Lebanon is home to tens of thousands of descendants of Palestinians who fled or were driven from their homes in the 1948 Mideast war over Israel's creation. Palestinian refugees in Lebanon cannot legally work in dozens of professions or own property. According to UNICEF, they are “effectively excluded from enjoying most civil and socio-economic rights” in Lebanon, where many live under appalling conditions in refugee camps that today resemble urban slums.

Several of Michlawi's family members hold college degrees but must work other jobs for far less money, including a cousin with a degree in mechanical engineering who works as a bus driver.

Despite this, he says he wouldn’t try to migrate by sea again.

“We’re not asking for mansions or to become generals or ministers in the government,” Michlawi said. “We just want our basic rights as Palestinian people to sustain ourselves — that is all.”

For now, he's trying to heal.

Michlawi says he hasn't slept for days and is still haunted by the “voices of the children screaming” in his head. He struggles to eat and avoids being anywhere near the coast.

“I used to love the sea, but now I avoid it," he said. "I don't even want to have a coffee at the beach anymore."