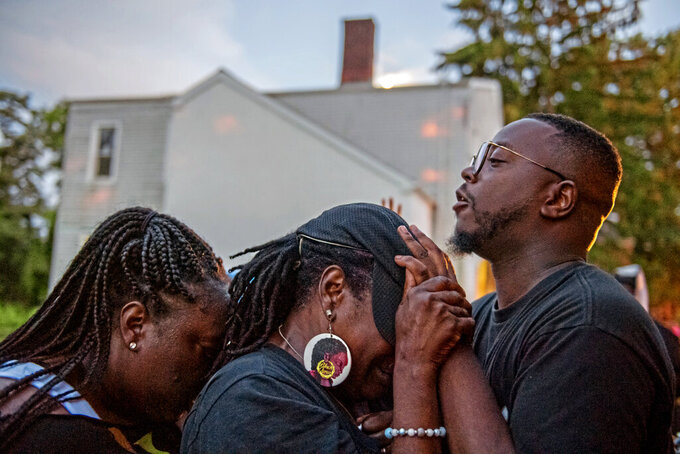 Ben Braun, ASSOCIATED PRESS
From left, Brittny Jackson embraces Terry Green who receives a blessing from Rev. Michael Day at the end of a worship service on Wednesday, Aug. 18, 2021, in Northview Heights in Pittsburgh. Day is making it his mission to work with the city and group violence outreach workers to address the needs of families in Northview Heights. He and church members planned to set up a tent in the neighborhood and try to connect residents to counseling, basic necessities and church ministries.(Ben Braun/Pittsburgh Post-Gazette via AP)

PITTSBURGH (AP) — For Winnie Evans, the spate of gun violence that has swept Pittsburgh in recent months struck close to home and shattered a generation of her family.

The 79-year-old woman lost two great-grandsons, both 18, within one day of each other to shootings — one of the attacks just down the street from her Northview Heights high-rise.

“They just shot him down,” Ms. Evans said. “A lot of people with guns. They don’t need them.”

The two teenagers are among the more than three dozen people who have been killed this year in a surge of neighborhood gun violence not seen in years.

While much of the nation has experienced a dramatic increase in murders and other violent crimes, Pittsburgh has seen a 46% rise in shootings that left people injured and a similar percentage jump in homicides over the same time last year.

Perhaps the most alarming statistic to neighborhood activists is the number of young people dying from bullets: nearly one-third of the city’s 41 homicide victims were teens.

One 15-year-old boy was fatally shot on Brookline’s Creedmoor Avenue after several individuals chased him down, witnesses told reporters. Weeks earlier, a 17-year-old boy was followed from an Allentown convenience store and shot five times.

In April, a teenager was shot and killed in a Hill District apartment stairwell where a group of teens were “play fighting” with a gun, court records state. A 15-year-old was taken into custody in the shooting.

“We’re losing our future, the gifts and talents that could’ve been major contributions to society.”

Crime experts and community leaders offer a host of reasons for the troubling rise in youth violence, including the pent-up emotions of the pandemic, the disputes arising from social media, and a critical lack of structure in the lives of young people after public schools, organized sports and youth programs were abruptly shut down.

“Once COVID kicked in, the structure fell apart,” said Marcus Reed, a street outreach worker with the Hill District-based Reach Initiative and president of the Northview Heights Tenants Council.

Outreach workers now say they are trying to stem the violence through a host of local programs until school starts in a few weeks but are growing alarmed.

Rev. Grayson says he knows the pain that deadly shootings bring to local families that he counsels; the pastor himself lost his own son in a highly publicized shooting in 2010.

“Some of us are never quite the same,” he said. “To bury their child, it’s not the natural order of life. It’s sad.”

The pandemic represents a dangerous backslide for a city that made significant progress in reducing gun violence: homicides and nonfatal shootings combined dropped 38% between 2016 and 2019.

Last year shootings ticked up, and then coupled with the increase this year, gun violence reached the grim levels that took place in 2016 — now roughly 44% above the average for the past four years.

In June alone, the city saw 27 shootings — the highest number in years — in neighborhoods from Homewood to the Hill District to the South Side.

In one of those attacks, police found a 6-year-old girl shot in the chest around 6:30 p.m. in an SUV in Homewood. Two hours later a man was hit by gunfire in the city’s East Hills neighborhood.

At 10:30 p.m., responders found two men who were shot — one multiple times — after a fight erupted outside of UPMC Children’s Hospital in Lawrenceville.

In July, the South Side Flats, a well-known entertainment district not known for gun violence, was hit with a series of street shootings that stunned business owners and visitors who frequent the popular night spots.

In one of the attacks, a 15-year-old opened fire on East Carson Street, the main drag, injuring three people.

That same day, a 20-year-old was shot to death less than a mile away in the South Side Slopes.

Overall, the police zone that runs from Mt. Washington and South Side Flats and down to Carrick has nearly surpassed all the shootings of last year.

In a written statement to the Post-Gazette, Pittsburgh Police Commander Eric Holmes said the city was steeped in a surge of violence that has persisted throughout the year.

“This includes violence involving our youth. It is heart-wrenching so many see young people committing such heinous acts and being the perpetrators in these violent crimes. We must do better as a society,” said Commander Holmes, chief of staff for the city’s police force.

The rise in nonfatal shootings during the first seven months of this year continues to frustrate police and the communities hit by the attacks because the shooters in such cases are rarely arrested.

So far this year, police have solved just a quarter of all such cases, a rate that has persisted over the past five years, the Post-Gazette found..

There are many reasons for the unsolved shootings, including witnesses who fear retaliation and a lack of cooperation from victims and witnesses, say police.

Of those injured by gunfire so far this year, at least 19 were under the age of 18 — more than all the youths shot in 2020, according to police statistics.

The overall spike in gun violence may be rooted in a host of causes, including the economic challenges that still persist from the pandemic and a continued degree of anxiety that has come with the virus and the impact that it has made on families.

Other contributing factors that experts and community leaders point to is the relative ease with which people can get guns — especially teenagers — and the online “beefing” on social media.

For Brandi Darby, of Shadyside, the accessibility of guns has been on her mind after her family was touched by violence this spring. It was her 15-year-old cousin, Deron Darby, who was charged as an adult in the Hill District shooting death of 17-year-old Isaiah Freeman.

Deron and Isaiah had been among a group of teens that met in a Bedford Dwellings apartment stairwell to smoke marijuana on the night of April 24; Deron began pointing a gun around and shot Isaiah, witnesses told police.

Ms. Darby calls her young cousin’s entrance into the criminal justice system “a different form of lost life and opportunity right before it could begin.”

“Nothing will ever be the same, and it’s a tragedy,” she said.

Battles on the internet

Local outreach workers say some of the rivalries that play out include online music battles — when one group of teens posts a recorded song online, and another responds — and videos of rivals disrespecting grave sites as flash points that turn violent.

Police in other cities, like Philadelphia which is faced with its deadliest year in three decades, are monitoring social media to squash revenge shootings before they break out.

David Harris, a University of Pittsburgh law professor who has been tracking crime trends in cities around the U.S., said it’s too early to identify definitive causes, but one thing is clear: The world surrounding young people collapsed.

“This terrible activity among youth coincides with them being shut in for months and months and to the extent that schools were decent outlets for social interaction that was positive,” he said. “There was (a) connection with teachers and other kinds of social support. Basically all that’s gone with the pandemic.”

Pittsburgh police declined to answer questions about whether the department performs its own monitoring of social media to help get a handle on youth violence, saying that it does “not discuss the process in which detectives conduct their investigations.”

The Rev. Michael Day, a pastor on the North Side and cousin of Ms. Evans’ two great grandsons who were fatally shot a day apart, said he’s seen “a lot of online beefing going on.”

He said he suspects jealousy in the killing of his cousin Kenneth, who posted music online and played football, but he is still waiting to learn more details from investigators.

As for his other cousin, Tyjuan, who was visiting from Ohio, he suspects he was “in the wrong place at the wrong time,” but again, few details have publicly emerged in his death. Police say they are still investigating and have not made arrests in either case.

The pastor said that both teens were remembered at large funerals.

He said now he’s making it his mission to work with the city and group violence outreach workers to address the needs of families in Northview Heights. He and church members planned to set up a tent in the neighborhood and try to connect residents to counseling, basic necessities and church ministries.

“Finding out what the issue is, understanding what the need is of not only that child but that household. The child might be acting out because mom is stressing because she can’t pay her bills,” he said. “What’s the root of the issue? That requires real conversation.”

“Every loss is exhausting, but it’s now like ‘we just lost two in less than 24 hours. What are we missing here?’ ”

The flow of guns

While shootings have surged across the city, other types of crime, such as robberies, have not risen at the same levels, underscoring the use of guns as a driving force in the crisis.

Pittsburgh announced in June a new firearm tracking unit in partnership with the Bureau of Alcohol, Tobacco and Firearms. The federal agency said it would devote two agents and an intel analyst to stem the flow of guns to the streets.

Although Allegheny County experienced a sharp rise in gun sales — a 54% increase last year — one expert doubts there is a direct link to the violence.

“People buying guns legally are not the ones out there engaging in this violence,” said Dr. Harris, who cited a previous spike in gun purchases in 2008 with no rise in crime.

“There are more guns being stolen from legitimate purchasers, and those turn up in crime,” he said.

Taili Thompson, director of violence prevention for Operation Better Block in Homewood, said in his career as a street outreach worker, he’s seen weapons enter neighborhoods through a drugs-for-guns “barter.”

“Sometimes it becomes the preferred method,” he said.

Regardless of the path of the weapons, Mr. Reed, who lost a nephew to gun violence more than a decade ago, said he sees guns getting in the “wrong” hands.

Rev. Grayson said he sees young people seek out guns “because they feel more protected.” Both men say they see the prevalence of weapons in their communities.

“It’s a no-win, and the contributing factors, disproportionate wealth ... and with COVID, those are factors that tie into the bigger picture,” Rev. Grayson said. “The availability of weapons that are just everywhere. People are making bad decisions, and people are losing their lives.”