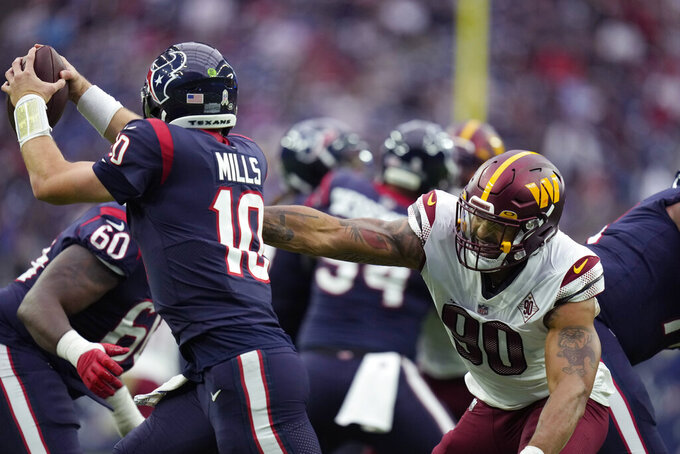 HOUSTON (AP) — Davis Mills threw an interception that was returned for a touchdown on Houston’s second offensive play, setting the tone for the terrible Texans’ worst game of the season in a loss to Washington.

The Texans (1-8-1) were behind 20-0 at halftime before falling to the Commanders 23-10 for their fifth straight loss.

“We were never in the game,” coach Lovie Smith said. “There’s total disappointment."

Houston had five yards of offense at halftime, lowest in franchise history. The team’s offensive line was dominated on a day the Commanders sacked Mills five times and limited the Texans to a season-low 21 yards rushing.

The crowd was mostly filled with Washington fans, but the few Texans supporters who showed up expressed their displeasure by pelting the team with boos throughout the game.

Smith was asked how he’s able to keep the team positive as it goes through such a difficult stretch. He noted that Sunday’s loss was the only blowout in that span.

“You can’t group them all together,” he said. “As a coach, you keep talking about one positive play, one positive game. That’s what we have to continue to do. We have not been dominated the way we were dominated (Sunday), so that’s what’s giving us hope.”

The Texans are trying to move past the loss and look for ways to improve. A win Sunday against the Miami Dolphins would be their first since Oct. 9.

“It is kind of hard, we haven’t won a game in a minute,” receiver Nico Collins said. “So, all you can do is keep going, keep faith. You can’t get down on yourself and start pointing fingers at everybody because then nothing happens from there. It just sinks the ship.”

After giving up two touchdowns in the first half, Houston’s defense allowed just one field goal after the break. Put in bad situations by the ineptitude of the offense, the Texans made some good plays to keep the Commanders out of the end zone after halftime.

Houston limited Washington to 3 for 13 on third downs and 1 of 4 in the red zone.

Lots to pick from here, but Mills must take care of the ball and make better decisions for the Texans to have any hope of improving their passing game. The second-year player from Stanford had two interceptions Sunday to give him seven in the last five games.

Despite Mills' struggles, Smith doesn’t appear to have any intention of benching him, so he’ll get seven more games to see if he can progress this year.

WR Brandin Cooks had three receptions for 70 yards Sunday a week after managing just 37 yards receiving in a loss to the Giants.

Rookie offensive lineman Kenyon Green, the 15th overall pick in the draft, had a tough day Sunday, getting beat again and again by Washington’s Jonathan Allen. Green has appeared in each game this season with nine starts but has failed to make much progress.

“There’s been a lot of learning moments that we’ve gone through with him,” Smith said. “But a part of going through that next step is going through some of those days when the guy that’s playing against you may be better than you right now. But you learn and just hope you get better and better.”

CB Derek Stingley, the third overall pick in this year’s draft, missed Sunday’s game with the hamstring injury. Smith he wasn’t sure when he would return Monday.

It was the fewest yards by a team in a half since the Raiders had minus-12 in a win over the Broncos in 2015. Mills had minus-1 yard passing in the first half as he was sacked three times.

The Texans will need to get off to a much better start if they hope to compete with the Dolphins, who have won four in a row.

“We talk about building and growing,” Smith said. “We’re a young team. We have to go through some growing pains. You have to fight through adversity.”