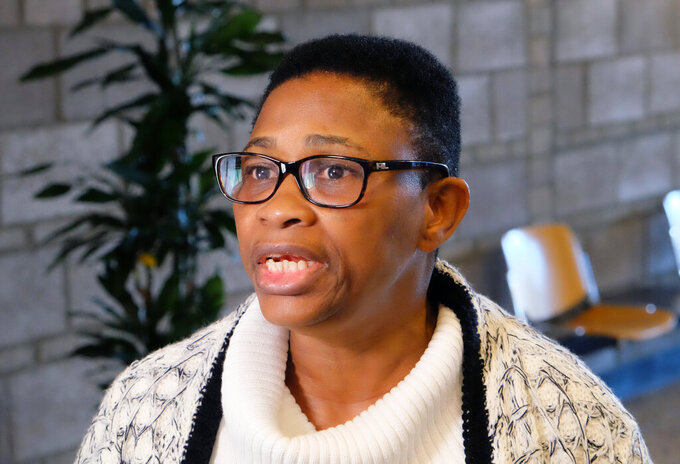 Mike Corder, ASSOCIATED PRESS
FILE - Esther Kiobel speaks to reporters outside The Hague Civil Court, the Netherlands, Tuesday, Feb. 12, 2019. The widows of four Nigerian activists executed in 1995 have withdrawn their appeal in a Dutch civil case that argued oil giant Shell was complicit in the men's deaths, ending a years-long legal battle for compensation and an apology. Lawyer Channa Samkalden confirmed the end of the case in a statement emailed to The Associated Press on Tuesday, Nov. 8, 2022. (AP Photo/Mike Corder, File)

THE HAGUE, Netherlands (AP) — The widows of four Nigerian activists executed in 1995 have withdrawn their appeal in a Dutch civil case in which they alleged that oil giant Shell was complicit in the men's deaths, ending a yearslong legal battle for compensation and an apology.

The four widows, Esther Kiobel, Victoria Bera, Blessing Eawo and Charity Levula, launched the case in 2017. It was rejected in a final ruling by The Hague District Court in March, following an interim decision in 2019 dismissing parts of their claim.

Their husbands were among nine activists from the Ogoni tribe, led by writer Ken Saro-Wiwa, who were hanged in 1995 for the murder of four political rivals. Supporters say they were really targeted because of their involvement in protests against environmental damage by Shell’s Nigerian subsidiary.

Lawyer Channa Samkalden confirmed the end of the case in a statement emailed to The Associated Press on Tuesday. The decision to withdraw the appeal was first reported by Reuters.

“This has been a lengthy and demanding procedure, which makes them relive horrible events, while the outcome is most uncertain,” Samkalden said, adding that the women have never received any form of compensation or other support.

“While two of them found refuge in the U.S. and Canada, two others are still in Nigeria in very poor conditions. Rather than focusing on the appeal, initiatives are now being developed aimed at providing these women with some basic financial assistance," the statement added.

Shell has always denied the allegations of complicity in the activists' executions.

The company said that the end of the civil case “does not in any way diminish the tragic nature of the events of 1995. These events shocked us deeply. The Shell Group, alongside other organizations and individuals, appealed for clemency to the military government in power in Nigeria at that time, but to our deep regret those appeals went unheard.”

Shell discovered and started exploiting Nigeria’s vast oil reserves in the late 1950s and has faced heavy criticism from activists and local communities over spills and for the company’s close ties to government security forces.

The Dutch case was not the first time relatives of Ogoni activists had taken Shell to court.

In 2009, Royal Dutch Shell agreed to a $15.5 million settlement to end a lawsuit in the U.S. District Court in New York alleging that the oil giant was complicit in the nine executions. Shell said it agreed to settle the lawsuit in hopes of aiding the “process of reconciliation.” But the company acknowledged no wrongdoing.