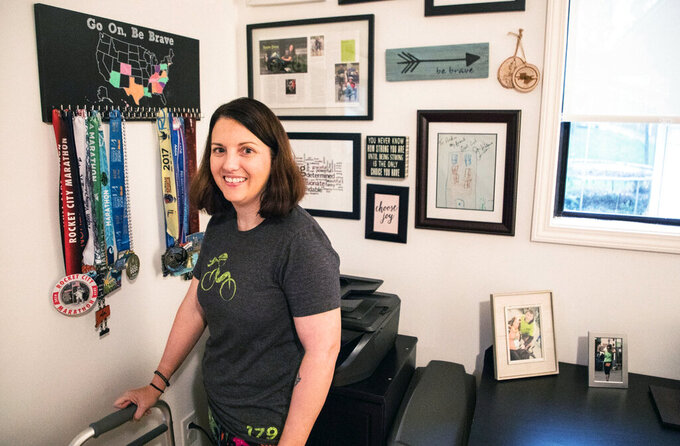 Julia Wall, ASSOCIATED PRESS
Andrea Peet poses for a portrait, with just a handful of her racing medals, at her home in Raleigh, N.C., on Feb. 13, 2020. Peet was diagnosed with ALS in 2014. As an avid marathon runner and triathlete, she has pushed through the physical struggles brought on by the disease to continue racing on a recumbent trike. Peet is the first person with ALS to complete a full marathon in all 50 states. (Julia Wall/The News & Observer via AP)

RALEIGH, N.C. (AP) — When Andrea Peet first set the goal of being the first person with ALS to complete a full marathon in all 50 states, even she wasn’t sure she could do it.

The task was monumental: she would need to finish 50 separate 26.2-mile races on a recumbent trike, after having been given an estimated five-year life expectancy with a disease that would progressively weaken her muscles with each passing year.

And that was even before a worldwide pandemic would halt marathons — and her progress — for nearly a year.

But on a recent Saturday, on Prince of Wales Island in Alaska, the Raleigh native marked the last U.S. state off her list.

“It’s really difficult to put into words,” Peet told The News & Observer in an interview before leaving for Alaska. “I’m so excited. I’m so just honored and humbled to be able to be at this point. When I started the journey, I’m not sure I really believed that I would make it to 50. It was more about saying, ‘I’m not going to let ALS and the fear of the future stop me from what I can do today.’”

Peet was diagnosed with ALS in 2014, when she was 33 years old. ALS (Amyotrophic lateral sclerosis or Lou Gehrig’s disease) is a progressive neurodegenerative disease that attacks cells in the brain and spinal cord, leading to muscle weakness and paralysis.

Typically, ALS patients are given a prognosis of living three to five years after diagnosis, and only 20% of those diagnosed make it to the five-year mark. Most people with ALS become totally paralyzed as they lose the ability to walk, talk, eat, swallow and breathe.

Peet, who lives in Raleigh with her husband, David, and their two cats, Bailey and Tango, has beaten those odds, and has used her time to raise awareness of the disease and give hope to those diagnosed. She has also worked with Google and the ALS Therapy Development Institute in helping develop speech recognition tools for ALS patients.

The COVID-19 shutdown hasn’t been the only hiccup along the way. Race No. 49 for Peet was supposed to be April’s Boston Marathon. But marathon organizers would not allow her to race, saying they had no category to accommodate her.

The Boston Marathon has categories for people with various disabilities, including ALS, Peet said. But in the ALS category, you have to run, which she cannot do. In other categories, participants must use a wheelchair or handcycle, which requires a good deal of upper body strength and endurance, which Peet does not have.

“They allow people on adaptive equipment who go faster than me and people with disabilities who are slower than me,” Peet said. “I just don’t really understand — I don’t really agree with keeping me out.

“I had hoped my story would be compelling enough in their drive for inclusion to trump their rules, but so far not,” Peet said. “When people do handcycle or wheelchair it’s usually because they are paralyzed in their lower body or have lost one or both legs, but for me, my ALS affects my whole body with weakness, so I can’t do handcycle. ... I have done 53 marathons with ALS, so other races are allowing it.”

There have been other occasions when Peet was told she could not compete, but it was because trails were too narrow or there were too many loops. In those cases it was not about the device used, it was about the actual course, she said.

Peet had a backup plan for Massachusetts — she had completed the Martha’s Vineyard marathon in October — but the Boston Marathon is special, and competing in it was important to her.

“There is nothing like the Boston Marathon,” she said. “The atmosphere is incredible and people try for years to get in, but they also have people doing it for charity, for lots of different causes and motivations.”

Not being one to easily accept being told she can’t do something, Peet did what you might expect her to do: she completed the marathon anyway, on her own terms and with her own team.

“I thought about it a lot and I said, if I want to do Boston, then I will do it,” she said.

So Peet went up to Boston the day before the race and finished the same course others would traverse the next day, with two friends on bicycles in front of her and her husband following in a car. Prolyfyc Run Creww from Charlottesville, Va., a group dedicated to cultivating diversity and inclusion, joined along the course, increasing her group to about 20 people.

When they got near the finish line, the streets were closed down for the weekend and a 5K race. Someone had told the police officers her story, and they cleared the way for her.

“With all of our friends and people who were out there, we had a big following and so it was amazing crossing the finish line,” Peet said.

A friend from her college days at Davidson, who lives in the Boston area, saw her story on Instagram and drove in and gave her his medal from a previous Boston Marathon.

“That was really special — the whole day was amazing,” she said.

The terrain of The Prince of Wales Island International Marathon is mountainous and she knew the weather would be cool and a bit rainy, but that didn’t concern Peet. She has raced in bad weather and completed hilly marathons before and she knows how to get it done.

Plus, she was just so hyped about the race — not just for her, but for everyone who has helped her throughout the journey.

Peet had about 50 people in Alaska with her, including a woman with ALS who was diagnosed last year in April.

“She had done a Chicago marathon for 20 years in a row, so she went home after being diagnosed and Googled marathon and ALS and my story popped up,” Peet said. “So that’s what I hope that I can provide to people with ALS — that that there is hope, that not everyone’s journey is the same.”

Hearing the statistic about the five-year life expectancy is scary, Peet says, “so I want to show people this is possible. And even people not battling ALS — everyone is fighting something — so I’m hopeful that I am able to do what I set out to do, and I hope I can help people meet big goals.”

Peet’s treatment and therapy plans are roughly the same as when we talked to her in 2020.

She still swims and does Pilates every week. Her meds are the same, except she finished a 6-month drug trial she was on in 2020. The drug wasn’t effective for her, she said, because it made her muscles tighter, but it had good results overall and it is moving forward.

Now in her eighth year after diagnosis, people often ask her for her secret. She knows ALS affects everyone differently, and that what works for her may not work for everyone.

“I wish I could offer them something more than I know that my focus on exercise at really low intensity — other than the marathons — has made a big difference for me,” she said.

Her biggest frustration at the moment is the worsening affect on her ability to speak.

“My voice is getting worse so that is frustrating because I raise awareness and I raise money with my voice by telling my story, and I am a guest speaker,” she said.

Her husband and her neurologist at the Duke ALS Clinic, Dr. Richard Bedlack, were with her in Alaska to help with that part.

“We will all tell the story,” she said.

Introduced during the last stretch of Peet’s marathon of marathons was the 50 for 50 Challenge — a fundraising initiative to raise $50,000 for ALS research by the time Peet finished her 50th marathon.

As with her other goals, expectations were met and exceeded. Two days before the Alaska race, The Team Drea Foundation, Peet’s foundation which has raised more than $750,000 for ALS Therapy Development Institute and Duke ALS Clinic, announced that $85,000 has been raised in the 50 for 50 Challenge.

There’s also a documentary in the works, which has been filming over the past several years as Peet has completed her marathons. The documentary, “Go On, Be Brave,” is raising money to cover costs associated with production.

Peet told The News & Observer in 2020 that she believes the marathons made a big difference in how she has learned to live with ALS. “I truly believe that it has helped me to maintain my strength, and mentally, it gives me a goal,” she said at the time. “It gets me outside and I’m not thinking about how I’m gonna die all the time. I’m thinking about the next race and working toward something.”

With the 50 marathon goal behind her, Peet’s new goal is to finish a memoir she started five years ago.

“I keep outliving the timeframe, which is a great problem to have,” she said. “So I’m going to take some time and really write down my story. It’s hard for me, obviously, to tell my story, and even though we have a documentary, I want to tell my story my way.”