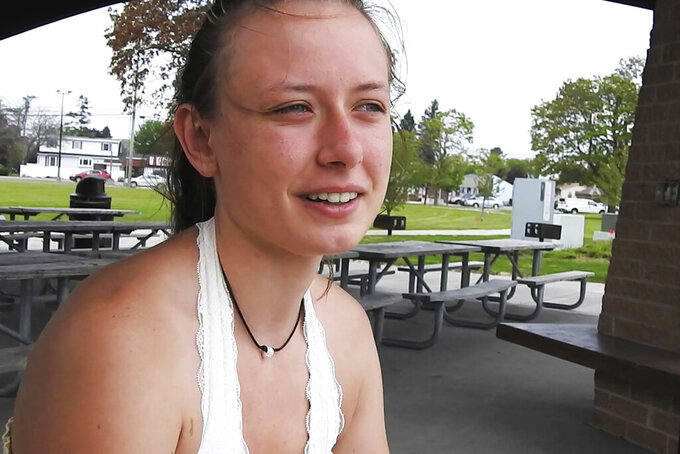 Julie Riddle, ASSOCIATED PRESS
Emily Weiss talks at Mich-e-ke-wis Park pn May 25, 2021, in Alpena, Mich., about confronting homelessness as a young person. At age 16, Weiss left her home because of family issues and moved in with her sister, 24 years her senior. Like Weiss, now 19, hundreds of children and teens in Northeast Michigan live in other people's homes, shelters, or places not fit for human habitation. Scores of local housing advocates are poised to provide counseling, connections, and encouragement to help young people in Northeast Michigan get back into homes. (Julie Riddle/The Alpena News via AP)

Family issues made it too hard for her to stay, so she moved in with her sister, 24 years her senior.

Like Weiss, now 19, hundreds of children and teens in Northeast Michigan live in other people’s homes, shelters, or places not fit for human habitation, according to The Alpena News.

While homeless families contend with financial hardships and a shortage of affordable housing, scores of local housing advocates are poised to provide counseling, connections, and encouragement to help young people in Northeast Michigan get back into homes — if only those families know such services exist, advocates say.

Meanwhile, Weiss worries about a couch-surfing friend who doesn’t have a stable place to stay.

Instead of literally living on the streets, homeless families in Northeast Michigan may stay with other families, crowd into a hotel room, or live in campers, Denstaedt said.

Currently, 266 Northeast Michigan children, from newborns through high school seniors, qualify for homeless services — probably an undercount in a rural area where the lack of anonymity discourages families from admitting they need help, Denstaedt said.

Some lost their homes because of financial hardships. For some, divorces or other separation led to homelessness.

In the past year, Denstaedt saw a spike in families moving back to the area to live with relatives after jobs disappeared elsewhere.

More than 900 people already live in the 681 subsidized and government-owned housing units in Northeast Michigan — and few are moving, landlords say. When rentals do become available, the cost often puts a deep dent in renters’ pocketbooks, especially for families with kids, who need bigger rentals that come at a higher cost.

Despite employers’ pleas for more workers, some parents can’t take a job because child care is scarce and pricey, Denstaedt said. When parents can’t pay the rent, parents sometimes send kids to live with grandparents who live on a limited income, themselves, and struggle to pay for expenses like backpacks and sport participation fees.

More than 50 agencies in the area — from the Alpena Housing Commission to the Alpena Senior Citizens Center, the Human Services Coordinating Council to the Michigan Works! Association — unite their efforts to help children, Denstaedt said.

“We get a huge grin from ear to ear when they’ve made it” into a home, Denstaedt said.

Compass North, a program through Child and Family Services of Northeast Michigan, helps homeless young people aged 16 to 21 find a place to live and teaches them the skills needed for independent living.

The program has helped 42 homeless young people since its start in 2017, according to Stephanie Dettloff, the agency’s executive director.

With their parents’ consent, teens in the program live in a host home, with a stipend for their host provided by Compass North.

Ten Compass North participants have found their own apartment. Five reunified with their parents. Other former participants moved in with friends or joined the military, and one moved into a college dorm.

More than half of the program’s participants are stably employed.

Weiss credits the program with giving her support she needed to keep her life on track, despite homelessness.

She just graduated from Alpena High School with both a high school diploma and an associate degree, thanks to the school’s early college program, and will attend college this fall.

“When you had it not easy, you know what you want to achieve,” said Weiss, encouraging other homeless young people to look past the struggles of their current situations. “There is more. And you can do it.”