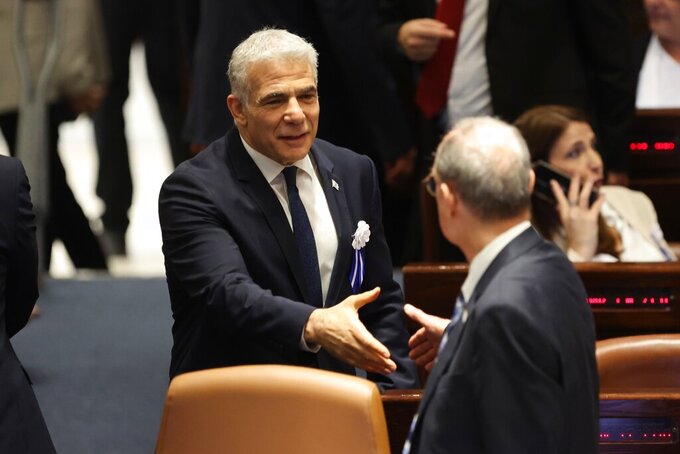 JERUSALEM (AP) — After nearly four years of political deadlock and five elections, Israel on Tuesday swore in the most right-wing parliament in its history.

Prime Minister-designate Benjamin Netanyahu is working to cobble together a far-right and religious governing coalition in the 120-seat parliament, or Knesset. Jewish left-leaning parties — long the champions of negotiations with the Palestinians — suffered major losses in the Nov. 1 election.

The surging popularity of a right-wing alliance once on the fringes of Israeli society helped propel Netanyahu's political comeback even as he stands trial on corruption charges. Lawmakers burst into applause as Netanyahu took the stage for a photo with other party leaders after the ceremony.

The 25th Knesset was sworn into office with trumpets and choral music just hours after a Palestinian assailant went on a deadly rampage in an Israeli-controlled industrial zone in the occupied West Bank, killing three Israelis and wounding three more before being shot dead.

Netanyahu's likely right-wing coalition partners have vowed to act more aggressively against Palestinian attackers and protect Israelis. Itamar Ben Gvir, an ultranationalist lawmaker who appears set to receive a position in the next government, called Tuesday's attack “a wake-up call" that proves “only an iron fist will stamp out terrorism.”

Israeli President Isaac Herzog appealed for national unity in his speech after the country's five divisive elections, saying Israelis are “exhausted from the infighting and its fallout.”

“Now, the responsibility lies first and foremost with you, the public’s elected representatives,” he said. “Responsibility to try to wean us off this addiction to never-ending conflicts.”

Herzog also called on the elected representatives to safeguard the rights of Israel's minorities who fear the next government coalition — expected to be overwhelmingly male, religious and right-wing — will roll back the achievements of its predecessor on issues like the environment, LGBTQ rights and funding for the Arab population.

“There are also communities, and especially minorities, who are fearful that their needs will not be on the agenda,” he said. “You, the public’s elected representatives, must give this your consideration and keep them in your sights, too.”

In his speech after the swearing-in, Israel's caretaker Prime Minister Yair Lapid was blunt.

“We need this house to be a place that Israelis look up to," he said, “not a place they are ashamed of and ashamed of its representatives.”

The new parliament replaces one of the most colorful and diverse in Israel’s history, which had an all-time high of 36 women and a small Arab Islamist party in the government coalition for the first time in history. This Knesset has just 29 women. Its 23 new lawmakers mostly come from Netanyahu's Likud party and the alliance of far-right parties known as Religious Zionism.

Religious Zionism has proposed a plan to limit the powers of Israel’s judiciary, which the party accuses of unfairly favoring the political left. In an apparent reference to the suggested overhaul, Herzog reminded the parliament of the importance of Israel's checks and balances.

“It is allowed, and sometimes even required, to reopen for debate the division of powers,” he said. “But we must do so through listening, through open dialogue, through respectful discourse — and fairly.”

The number of Arab lawmakers has plummeted to its lowest level in two decades, the Israel Democracy Institute reported, with just 10 Arab parliament members out of 120. Balad, a Palestinian nationalist party, failed to make it into parliament, partly a result of low voter turnout among Israel’s Arab minority.

Meretz, a left-wing party that supports Palestinian statehood, also dropped out of parliament entirely. In his speech, Herzog said the party “will be missed." The Labor Party, which ruled Israel for its first two decades, barely scraped into parliament with just four seats.