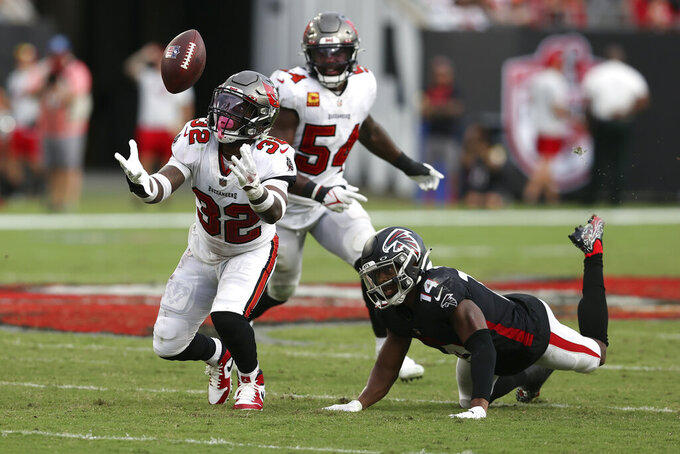 Mark LoMoglio, ASSOCIATED PRESS
Tampa Bay Buccaneers safety Mike Edwards (32) intercepts a pass by Atlanta Falcons quarterback Matt Ryan that was intended for wide receiver Russell Gage (14) and returns it for a score during the second half of an NFL football game Sunday, Sept. 19, 2021, in Tampa, Fla. (AP Photo/Mark LoMoglio)

ATLANTA (AP) — A week after looking downright pathetic in a season-opening loss to Philadelphia, the Atlanta Falcons were at least competent in a 48-25 defeat at Tampa Bay.

The score was not entirely indicative of the game's flow, and first-year coach Arthur Smith was hardly despondent.

“I’m proud to coach this group,” he said. “We are building something in there. These guys fight. So, you go on the road like this against a really good, veteran team, our guys kept swinging. It’s unfortunate what happened at the end.”

The end included two tipped passes from Matt Ryan that were intercepted and returned for touchdowns, putting the game out of reach. But there were some encouraging moments for the Falcons.

Cordarrelle Patterson got loose for a 23-yard catch on a screen that was nearly a touchdown. Calvin Ridley caught a short TD pass on fourth-and-goal. Dante Fowler Jr. strip-sacked Tom Brady. Patterson took a toss sweep 10 yards for a score.

Atlanta was trailing by only three points early in the fourth quarter, so it was in the game late. That will give Smith an opening for positive messaging this week as the team tries to avoid a 0-3 start for the second straight year.

“They got two Pick-6s off tipped balls? That’s 14 points right there,” Smith said. “It looks ugly in the box score, on the surface looking at it. Understanding the context of the game, we had a chance in the fourth quarter. We have to convert. To go win it or at worst flip it. We had all three timeouts. Maybe you pin them back and you have a chance. We didn’t convert and they did. That was the difference.”

Ryan’s connection with Patterson and rookie tight end Kyle Pitts, who combined for 10 catches for 131 yards and one touchdown. Patterson, Pitts and receiver Calvin Ridley are the team’s best playmakers, and Ridley led the team with seven catches for 63 yards. There’s ample opportunity for more. Ryan did a good job of looking at every option as 10 different receivers caught a pass.

The running game averaged 2.8 yards on 20 attempts. Atlanta was trailing throughout, so Smith, who calls the plays, essentially had to abandon the run to play catch-up, but the Falcons still need to get a better push up front early on.

Ryan also had eight pass deflections, mostly because the Bucs’ front seven kept pressuring the line and pushing him off his spot.

“Yeah, that’s part of the game,” Ryan said. “It’s tough. You’ve got to give them credit. They did a good job the entire night of continuing to pressure, getting their hands up. It’s tough to go against, but you’ve got to learn from it. You better. Hopefully, we can do that across the board as we move forward.”

A week after catching four passes for 31 yards in a 32-6 blowout loss to the Eagles, Pitts had five for 73. That’s not much of an increase, but the fourth overall draft pick flashed his athleticism on a pass over the middle that was thrown behind him. Pitts readjusted to make the catch for a decent gain. He said Monday that he did a better job of reading coverages, proof that he’s shortening his learning curve.

Cameron Nizialek shanked two punts that gave the Bucs good field position, the worst coming early in the fourth quarter after a three-and-out. Tampa Bay took over at the Atlanta 43. Three plays later, the Bucs scored to make it 35-25.

Cornerback A.J. Terrell suffered a head injury in the third quarter and did not return. His availability is doubtful this week. Receiver Russell Gage hurt an ankle a couple of times. Outside linebacker Steven Means left with an early undisclosed injury and did not return.

10 — the longest run from scrimmage, and it came from Patterson, who gained just 1 net yard on his six other attempts. That must improve if the Falcons are going to have a balanced attack.

The Falcons must regroup and have a good week of practice before visiting the New York Giants (0-2) next weekend. They need to establish a rushing attack and keep working to pressure the quarterback. They had three sacks against the Bucs, so that’s a good start.