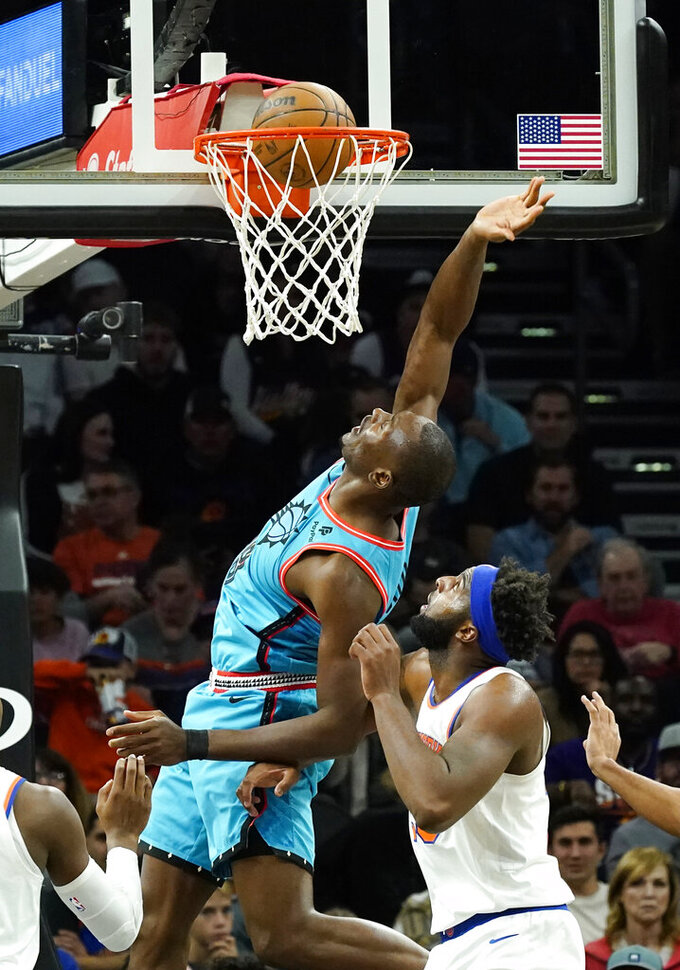 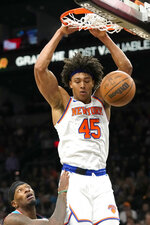 Deandre Ayton had 13 points and 11 rebounds and all of the Suns’ starters scored in double figures. Torrey Craig scored 14 points and Mikal Bridges 13. Reserve Damion Lee scored 15 and shot 4 of 6 from 3-point range.

The Suns, playing without Chris Paul (right heel injury) for the sixth straight game, got 3-pointers from eight different players.

“That is who we can be (every night),” Suns coach Monty Williams said. “No matter who we have on the roster we can play that kind of defense with the energy, effort and game plan discipline.”

Payne, who played 32 minutes and replaced Paul as a starter, also had a game-high nine assists and contributed seven rebounds.

“Being out there on the floor is definitely helping me,” Payne said. “Playing through my mistakes. I feel I am learning from them.”

Jalen Brunson scored 27 points on 11-of-21 shooting to lead the Knicks. RJ Barrett finished with 12 points and Quentin Grimes scored 10.

“The rebounding was a big problem,” Knicks coach Tom Thibodeaux said. “I thought we played well in the first half, but we had that lull, and you give a team like that a second and third crack at things they’ll make you pay for it, and they did.”

“We were getting out in transition, the bigs were setting screens which opens up everything else,” Booker said.

The Knicks shot 46% in the first half and just 34% in the second half. The Suns had 17 3-pointers; the Knicks had seven.

New York, playing the fourth of a five-game West swing, stayed in the game in the first half behind Brunson, who scored 11 of his points in the second quarter. The Knicks erased an 11-point Phoenix lead late in that period but Bridges’ runner rolled around and in to give the Suns a 55-53 lead at the break.

The Suns outscored the Knicks 35-22 in the third period. They extended their lead to 90-73 on 3s from Booker and Duane Washington Jr. and led by as many as 26 points in the fourth quarter.

Booker had 11 points in the third quarter, making all three of his 3-point tries.

“You want to try to get it inside 10, and with the way people shoot the 3s you can make up ground quickly, but they’re a really good defensive team as well,” Thibodeau said.

Payne’s 10 points — all scored early in the first quarter — led the Suns in the first half. Craig scored nine points in the second quarter, including a pair of dunks and a 3-pointer. New York’s Brunson had 13 to lead all scorers.

Knicks: C Mitchell Robinson returned after missing eight games with a right knee sprain. He finished with two points and four rebounds in 17 minutes. F Cam Reddish (right groin) was injured Friday against Golden State and did not play.

Knicks: Brunson’s streak of consecutive free throws ended at 46 with a miss in the fourth quarter. He was six short of the Knicks’ record.

Suns: Extended their winning streak over the Knicks to nine games. The last New York win came on Jan. 26, 2018, in Phoenix.