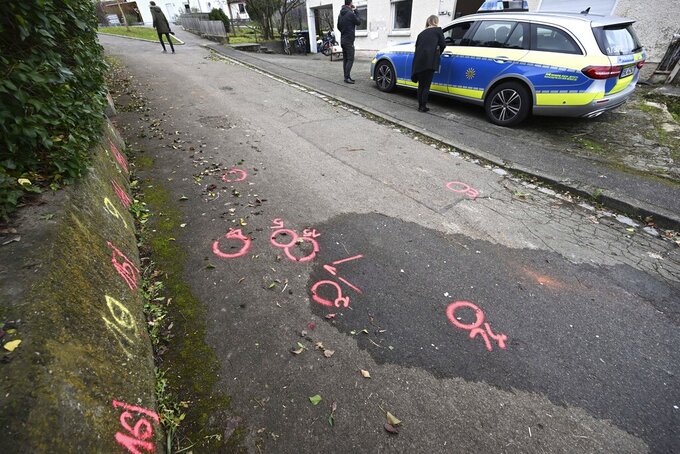 Bernd Weissbrod, ASSOCIATED PRESS
Police forensics markers are paint at a crime scene where two girls was attacked on their way to school in Illerkirchberg near Ulm, Germany, Monday, Dec. 5, 2022. (Bernd Weissbrod/dpa via AP)

BERLIN (AP) — German police said a 14-year-old girl died and a 13-year-old girl was seriously injured after they were attacked by a man with a knife on their way to school Monday.

Police in the southwestern city of Ulm said first responders resuscitated the older girl before she was rushed to a hospital following the attack at about 7:30 a.m. in the nearby town of Illerkirchberg.

“Despite all efforts by the doctors she died there,” police said in a statement. The younger girl remains in the hospital with serious but not life-threatening injuries, they said. Both victims had German citizenship.

A 27-year-old man was arrested by officers inside a refugee shelter near the scene of the attack. The man, who was found with injuries and a knife, is of Eritrean origin, police said. Two other men also were detained.

Investigators were trying to determine a motive for the attack and whether the suspect and the girls knew each other before it happened.

“I grieve with the girl who was killed and hope fervently that the injured recovers her health,” Interior Minister Nanct Faeser said on Twitter. “My thoughts are with their families at this time.”

In their statement, police urged people to refrain from stoking suspicion against refugees, asylum-seekers and other foreigners.