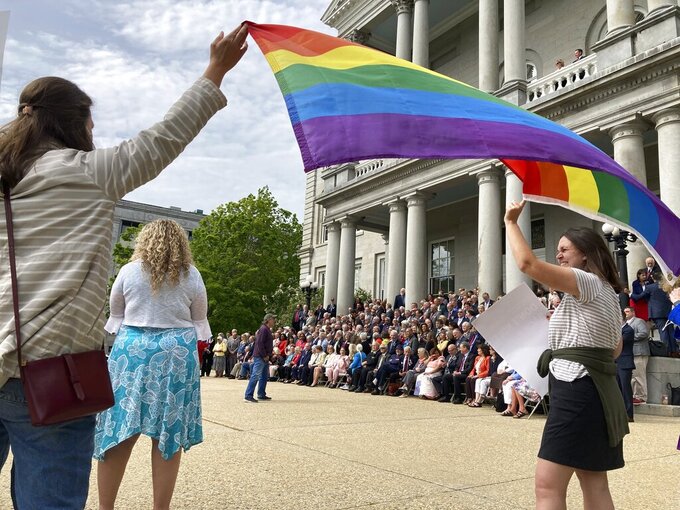 Holly Ramer, ASSOCIATED PRESS
Activists gather outside the New Hampshire Statehouse, on Thursday, May 26, 2022, as the 400-member House pose for a class photo on the last day of the legislative session in Concord, N.H. Both the House and Senate later passed a new congressional redistricting map, but the matter is headed to the state Supreme Court after Gov. Chris Sununu said he would veto the plan. (AP Photo/Holly Ramer)

New Hampshire is one few states yet to finalize new U.S. House districts as required every 10 years to reflect population changes. Democrats currently hold both seats, and while Republicans control the Legislature, they have struggled to pass what Sununu has referred to a fairness “smell test.”

Both the House and Senate passed a plan in March that would have given the GOP a strong advantage in the 1st District, but Sununu promised to veto it. A House-passed plan that would have clumped together communities along the I-93 corridor later failed in the Senate, leading to a third plan that was approved Thursday in both chambers.

“I believe it is the compromise New Hampshire needs going forward for the next 10 years,” said Sen. James Gray, R-Rochester.

Sununu quickly said he will veto the bill, however, in part because it puts both U.S. Reps. Chris Pappas and Annie Kuster into the 2nd District.

“The citizens of New Hampshire will not accept this map,” he said. “Our races have to be fair, which is why I will veto this map.”

Instead, the state Supreme Court will step in. In a ruling this month, the court said it will use the existing districts as a benchmark and employ a “least change” approach. That could mean adopting a map favored by Democrats that would move a single town — Hampstead — from the 1st District to the 2nd.

Senate Minority Leader Donna Soucy, D-Manchester, called the GOP plan one of the majority’s most blatant examples of extremism.

“Once again, they’re out of step with their own governor, out of step with the people of New Hampshire,” she said at a news conference ahead of the votes. “It’s probably one of the best reflections of their tin ear to the folks they’ve been elected to serve.”

The plan passed the House by only five votes. By the same slim margin, the House on Thursday also killed another bill Sununu had promised to veto.

That bill, modeled after legislation filed in multiple states, would have given parents greater oversight over their child’s curriculum, participation in clubs and conversations with staff.

The bill had passed the Senate 14-10 along party lines. Sen. Jay Kahn, D-Keene, argued against it, saying teachers already are “looking over their shoulders” thanks to a new law regulating classroom discussion of race and other topics.

“Now, we’re going to impose another requirement that questions whether educators can have a discussion with a student without reporting on it to parents,” he said. “It is one more ice cube being added to the chilling effect of our actions on New Hampshire educators.”

Rep. Melissa Blasek, R-Merrimack, pushed back against criticism that the bill would force teachers to “out” LGBTQ students to potentially abusive parents and said she equates parental rights to gun rights.

“There are criminals, yes. And one of the primary purposes of government is to punish wrongdoing,” she said. “But restricting rights from law-abiding parents and gun owners does not prevent criminals from participating in criminal activities.”

As for guns, the House also rejected an effort to reintroduce failed legislation would have required criminal background checks prior to commercial firearms sales.

Rep. Debra Altschiller, D-Stratham, said there have been dozens of mass shootings nationwide since the bill was defeated in March, including the recent shootings at a grocery store in Buffalo, New York, a church in Southern California and a school in Uvalde, Texas.

“It is imperative that we act, and act now to curb the flow of blood running toward us,” she said. “We can do hard things. We can make a change so we don’t have to live like this.”

Her remarks were met with booing from some of her colleagues. The jeering turned to applause for Rep. Terry Roy, a Deerfield Republican who argued that voters don’t want further gun control.

“We should not ever, ever use tragedy to push legislation,” he said.