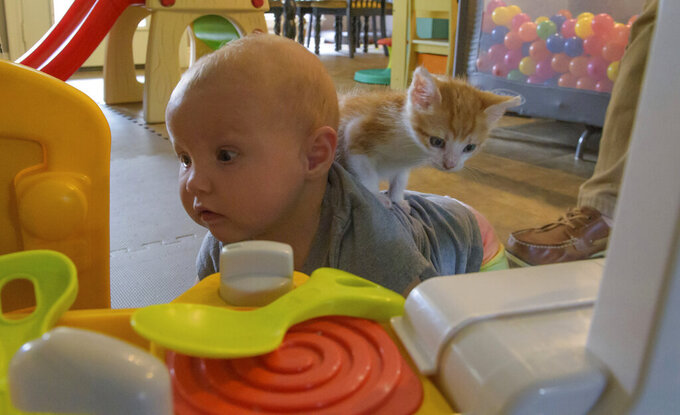 SUMRALL, Miss. (AP) — When Emily Hixon shot video of her daughter, Sojourner, playing with a kitten the family had rescued, she never dreamed it would go viral one day.

Hixon, of Sumrall, said she heard the kitten mewing in a small shed by Sumrall High School, thinking it was a newborn crying for its mother. After a couple days, she realized it was alone and needed help.

“I was afraid it was stuck, so I got my husband to go into the shed to see if he could get it out,” she said. “It was very sick, so we took it to the vet then took it home.”

Emily and her husband, the Rev. Nance Hixon, pastor of Sumrall United Methodist Church, nursed the kitten back to health before introducing it to their children.

“We started teaching them how to touch it softly,” Emily Hixon said.

While the kitten, which they named Sprinkles, and Sojourner were getting to know each other, Emily shot video of the two and shared it on Twitter.

Emily, a librarian, stays at home with her children and uses Twitter to help her stay connected with other librarians around the world, some of whom have become friends.

Before moving to Sumrall, the family had lived in Natchez and parts of their native Louisiana — wherever the United Methodist Church would send them.

“Life in ministry is very isolating socially,” she said. “We move around so it’s hard to make and maintain friends in churches and communities when you’re a clergy spouse, so I’ve invested heavily in relationships in my professional field via Twitter. Everyone (in the librarian network) has been so excited to see the video go viral.”

The network is also where fellow librarian and children’s book author Lydia Sigwarth saw the video and suggested sharing it on TikTok.

“Emily put the video of Jojo (Sojourner) and Sprinkles on her Twitter and I immediately knew it had potential,” Sigwarth said. “People love kitties, they love babies and they especially love babies and kittens together.”

Emily Hixon sent the video to her friend. Once Sigwarth posted the video on TikTok, it exploded.

The video quickly gathered roughly 2 million views, which prompted Storyful, a social media monitoring service, to pick up the video for licensing.

The video has been picked up by several news reporting sites, including USA TODAY, the New York Post, the Daily Mail and Yahoo! News.

The Hixons have enjoyed seeing the enormous response.

“I woke up one morning and my friends were sharing links that the video had been shared on (news sites) like USA TODAY,” Emily said. “It was real fun.”

Sojourner, however, at 10 months old, is unaware of the instant fame she’s achieved. Her sister, Noah Jane, who is nearly 3, understands a little more.

“It will be a fun story to tell (Sojourner) when she gets bigger,” Hixon said.

The Hixons have gotten a lot of positive feedback on their daughter’s viral video, including comments like, “That kitten chose its person real quick,” and “The cutest thing you’ll see all day.”

Instant fame isn’t all it’s cracked up to be, though. Emily Hixon said she has gotten plenty of negative responses, too. But her librarian friends come to her rescue and respond to posts that criticize the video or her children.

“I’ve seen my friends pop up in comments and stuff, defending (Sojourner’s) name when people call it and Noah Jane’s names stupid,” Emily said. “They defend me when people criticize us letting a baby and kitten play together, even though it’s supervised.”

Sigwarth, who has known Emily several years, said the criticism is undeserved.

“I was happy to be able to defend Emily’s parenting, “Sigwarth said. “She’s a fantastic mom and I was ready to clap back at anyone who critiqued her.”