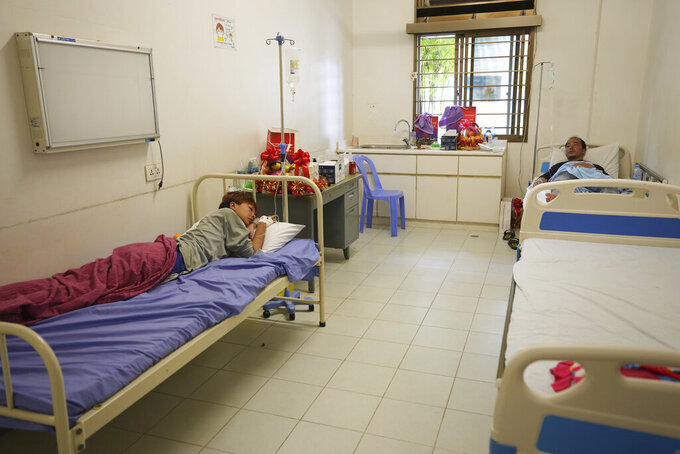 SIHANOUKVILLE, Cambodia (AP) — Chinese survivors from a boat that sank near a Cambodian island, killing three people and leaving eight missing, said they embarked on what they believed would be a short-term fishing job and ended up without food and water aboard the vessel and their belongings taken away.

Cambodian authorities said Friday they rescued 21 people a day after the boat small wooden fishing vessel sank near Koh Tang, a Cambodian island close to the maritime border with Vietnam.

Kheang Phearom, a spokesperson for Cambodia’s Preah Sihanouk province, announced Saturday on his Facebook page that nine more people were rescued by the Vietnamese and three bodies were recovered by Cambodia, leaving eight people still missing.

Dramatic video footage showed Cambodian crew on a nearby boat tossing life jackets and life-saving buoys toward the ramshackle vessel as it slowly listed to the right and slipped below the surface, sending its passengers spilling into the water.

Two Cambodian crew members abandoned the boat when it first got into trouble and were rescued earlier. Cambodian police described them as guides and put them under arrest.

It was not immediately clear why the passengers were being brought to Cambodia, though the account given by survivors suggests they were tricked by human traffickers who sometimes lure people with false offers of lucrative jobs. They then force them into activities such as internet scams to cheat people out of their money, or prostitution, and offer them freedom only in exchange for large amounts of money.

Preah Sihanouk provincial police chief Gen. Chuon Narin told local media that the passengers had set off from China's Guangdong province Sept. 11 on a speedboat and had been transferred to the fishing boat Sept. 17 in international waters.

Two survivors, a man and a woman who were being treated in the Preah Sihanouk provincial hospital, recounted parts of their ordeal Saturday in front of journalists.

“We boarded the boat and all of our belongings and electronics were confiscated. I thought it was not a big deal, right? So I handed them over,″ he said. “Then after about three days, there was no food left. On day four there was nothing to drink. So for about four days we did not have anything to eat or drink.”

Huang Qian, 20, told a similar story, and recalled how they were moved to a second boat, where each was given two packets of instant noodles and nothing more.

The situation turned even grimmer when water got into the engine, disabling the vessel. There were no life jackets aboard when she had to abandon the boat.

“I floated on the open sea for about two days,” she said. “We had a cooler and the two of us were just sitting on the cooler and floating around. And then we saw a fishing boat, so we called for help. So they tossed a rope to us.”