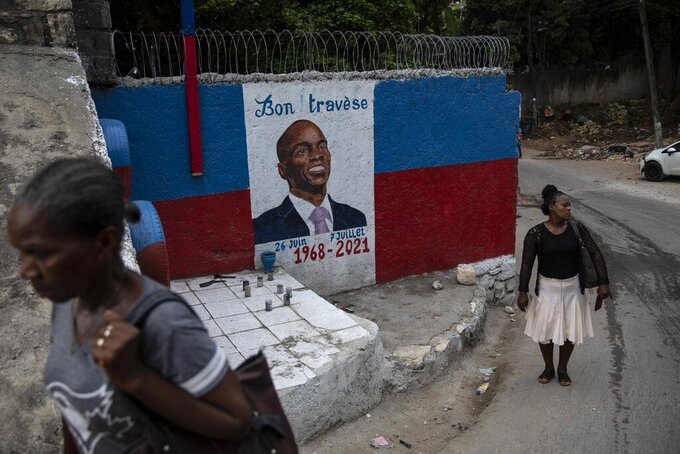 Rodrigo Abd, ASSOCIATED PRESS
Women walk next to a mural with the portrait of the assassinated president of Haiti Jovenel Moïse in Port-au-Prince, Haiti, Wednesday, Sept. 22, 2021. (AP Photo/Rodrigo Abd)

SAN JUAN, Puerto Rico (AP) — A police superintendent in Jamaica told The Associated Press on Thursday that authorities have arrested a Colombian man they believe is a suspect in the July 7 assassination of Haitian President Jovenel Moïse.

More than 40 suspects have been arrested so far in the presidential slaying, including 18 former Colombian soldiers and several Haitian police officers. Colombian authorities have said the majority of soldiers did not know the true nature of the operation.

Haitian authorities have said the mastermind behind the killing and the person or persons who financed it are still at large. Police say they also are looking for other people accused of involvement in the killing, including a former Haitian senator and Joseph Badio, who once worked for Haiti’s Ministry of Justice and at the government’s anti-corruption unit until he was fired in May amid accusations of violating unspecified ethical rules.

Moïse was fatally shot at his private home in a pre-dawn attack in which his wife, Martine Moïse, was wounded.

The investigation into the killing has faced multiple obstacles and led to the dismissal of a justice minister and the chief prosecutor for the capital of Port-au-Prince. The first judge assigned to oversee the investigation stepped down in August citing personal reasons. He left after one of his assistants died in unclear circumstances.

Court clerks who were helping investigate the killing also have gone into hiding after receiving death threats if they didn’t change certain names and statements in their reports.

The presidential killing shocked the nation of more than 11 million people and has deepened the country's political instability, with protesters on Thursday calling for the resignation of Prime Minister Ariel Henry as they decried a spike in crime and demanded better living conditions.

Henry recently told AP that he expects to hold presidential and legislative elections next year.