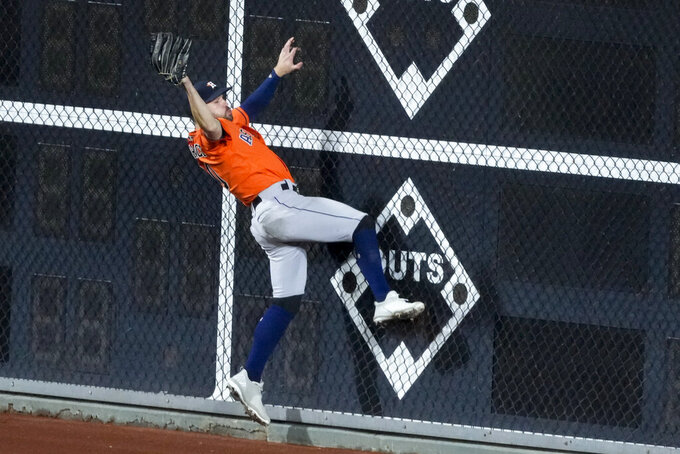 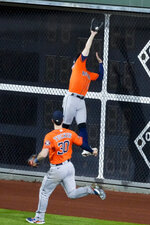 PHILADELPHIA (AP) — Trey Mancini saved the Houston Astros with the play of the game.

Until teammate Chas McCormick topped him with the play of a lifetime.

No matter how many potential game-changers the Philadelphia Phillies smashed in the late innings during Game 5 of the World Series, the Astros simply wouldn't let them catch up.

“You have to play defense,” McCormick said Thursday night after a 3-2 win gave Houston a 3-2 edge in the Series. “I’m speechless.”

In the eighth inning, Mancini corralled a wicked, one-hop grounder by Kyle Schwarber down the first-base line, sprawled into foul territory and then tagged the bag to strand runners at the corners.

“I had nothing going through my head,” Mancini said. “I just tackled it, basically.”

With one out and no one aboard in the ninth, McCormick sprinted from his spot in center field, jumped high and banged into the chain-link fence to make a backhand catch on J.T. Realmuto's long drive.

“Honestly, I thought he hit it out," McCormick said. “At that point, I was being really aggressive. I was going to run through a wall and catch it, no matter what.”

“I saw it up in the air. The fence is really flexible. I ran right into it and it didn’t hurt too much. I jumped as high as I could and just made a great catch.”

McCormick, who grew up in nearby West Chester, Pennsylvania, rooting hard for the Phillies, bounced off the fence and was flat on his back on the warning track for a moment.

The crowd at Citizens Bank Park that had been roaring for a rally fell silent.

“Best feeling ever, just laying there looking at the Phillies fans. Being home,” he said.

“It’s a tough one. It’s one of my better catches. One of the most important games of my life," McCormick said.

Said Astros manager Dusty Baker: “McCormick’s always bragged about his basketball skills, and so I guess I've got to believe him.”

The Phillies watched in stunned silence.

A late sub at first base after Yuli Gurriel got hurt — and playing in the field for the first time since Oct. 5 — Mancini stopped a grounder by Schwarber going nearly 100 mph.

“Before the game, if you told me I contribute in a big way tonight, I thought it would come with my bat, not my glove,” Mancini said. "I’m much more known for my bat than my glove I’d say.

“Just really happy to contribute. That was a huge win,” he said.

Acquired from Baltimore in August, the slugger hit only .176 for his new team, and was 0 for 18 in his first postseason.

But when the ball came his way in a hurry, he snagged it. Schwarber, meanwhile, slammed his helmet to the ground.

“Trey, I can’t say enough about what he’s done,” winning pitcher Justin Verlander said. “Obviously, he would like to contribute more offensively.

“He said it himself: He said he’s not necessarily always known for his defensive play, but to come through with that play tonight. I mean, Schwarber hit that — it seems like every ball he hits in play is 110 miles an hour-plus. So for Trey to make that play, Trey and Chas both, just huge contributors to tonight.”

The result: The same week Astros rookie shortstop Jeremy Peña and outfielder Kyle Tucker won Gold Gloves, two sterling plays by a pair of other defenders put Houston one victory from the championship.

Earlier in the game, Peña made a leaping catch to blunt a potential rally.

“You've got to give them credit,” Phillies manager Rob Thomson said. “We just didn’t get many hits with runners in scoring position and we had a lot of opportunities.”