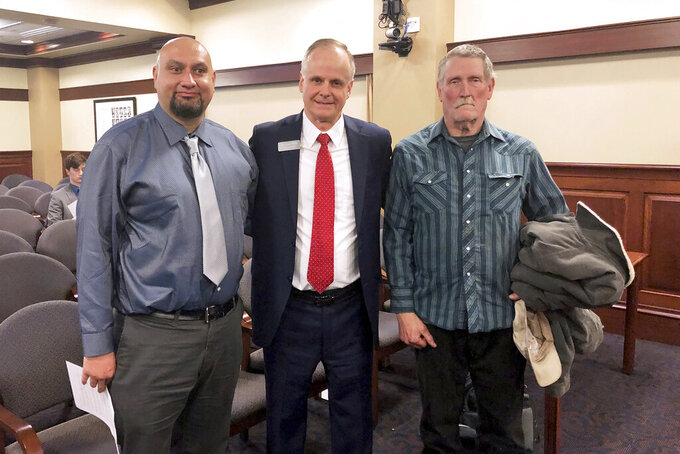 Keith Ridler, ASSOCIATED PRESS
FILE - In this Feb. 11, 2020, file photo, from left, Christopher Tapp, Republican Rep. Doug Ricks and Charles Fain appeared before the Idaho House Judiciary, Rules and Administration Committee in Boise, Idaho, to testify in favor of legislation that would compensate the wrongly convicted. Idaho officials have approved payments of $1.4 million to Fain and $1.2 million to Tapp, who each spent decades in prison for crimes they didn't commit. Republican Gov. Brad Little and three other statewide-elected members of the Idaho Board of Examiners on Tuesday, June 15, 2021, approved the payments to Fain and Tapp. (AP Photo/Keith Ridler, File)

Republican Gov. Brad Little and two other statewide-elected members of the Idaho Board of Examiners approved the payments to Charles Fain and Christopher Tapp.

Republican Sen. Doug Ricks, who spearheaded legislation this year to compensate people wrongfully convicted in Idaho, said Fain and Tapp will likely get checks in the next several days.

“I've very pleased that we're to this point,” Ricks said. “We can give compensation to try to offset some of the pain that we have caused them."

Fain, who is getting $1.4 million, was convicted of kidnapping, rape and murder in 1983 following the death of 9-year-old Daralyn Johnson. In 1984 he was sentenced to death. He came within four days of being executed at one point, Ricks said.

DNA evidence not available at the time of the conviction later cleared him, and he was released in 2001. Authorities last year identified a possible suspect in Daralyn's killing: David Dalrymple, who is already serving a life sentence for kidnapping and sexual assault of a minor in a different case.

Lawmakers earlier this year passed the Idaho Wrongful Conviction Act, which cleared the House and Senate unanimously and was signed into law by Little in early March, taking effect immediately.

Little vetoed a similar bill last year brought forward by Ricks when he was a representative in the House. At the time, the governor cited his concerns that it set up an adversarial court proceeding between the state and the wrongly convicted that, Little said, would likely be time-consuming and expensive.

The bill Little signed this year has a different, faster procedure, with state officials approving payments after a wrongfully convicted person obtains a “certificate of innocence” from a court.

The approval by the Board of Examiners on Tuesday followed a recommendation from the Idaho attorney general's office. State Controller Brandon Woolf is on the board, and it's his office that will issue the checks.

Tapp has a federal lawsuit pending against the city of Idaho Falls and law enforcement officials there concerning his wrongful conviction. Should he win and receive a monetary award, he would have to reimburse the state an equal amount up to the $1.2 million he's receiving.

Ricks said an attorney representing two other people who were wrongfully convicted and served shorter sentences has contacted him about potential compensation.