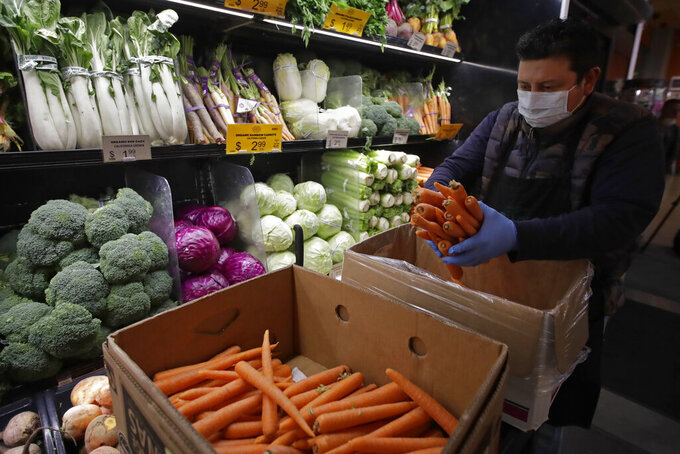 Ben Margot, ASSOCIATED PRESS
FILE - A worker stocks produce before the opening of a market in San Francisco on Friday, March 27, 2020. On Thursday, Nov. 17, 2022, U.S. agriculture officials proposed changes to the federal program that helps pay the grocery bills for pregnant women, babies and young children that includes keeping a bump in payments for fresh fruits and vegetables allowed during the COVID-19 pandemic. (AP Photo/Ben Margot, File)

U.S. agriculture officials proposed changes Thursday to the federal program that helps pay the grocery bills for low-income pregnant women, babies and young children, including extending a bump in payments for fresh fruits and vegetables allowed during the COVID-19 pandemic.

The update also adds more whole grains, canned fish and non-dairy options to their shopping carts. The effort is aimed at expanding the number and type of healthy foods available to families who get assistance from the Agriculture Department's program known as WIC, officials said.

The revisions would make permanent payments authorized by Congress during the COVID-19 pandemic that increased vouchers for fruits and vegetables to $25 a month for children ages 1 to 5 and to $49 a month for breastfeeding women.

“This increase in fruits and vegetables has really made it attractive for families to have their children in the program longer,” said Geraldine Henchy, director of nutrition policy for the nonprofit Food Research & Action Center, who applauded the changes. “Kids really love fruit.”

At the same time, the plan would reduce the amounts of some foods, for example reducing or eliminating juice allowed for some recipients. It also reduces the amount of milk and cheese covered under the program, a move that drew immediate criticism from the dairy industry.

“It is unfortunate for WIC participants that the proposed rule would decrease access to dairy products and the unique nutrient profile they provide," the International Dairy Foods Association and the National Milk Producers Federation said in a statement.

More than 6.2 million pregnant women, mothers, babies and young children participate in the program annually. The federal government currently pays about $5 billion a year to run the program, which is administered through states and other jurisdictions. The Supplemental Nutrition Program for Women, Infants and Children provides vouchers to mothers and children who qualify and specifically lists the amount and types of food they can buy.

More canned fish, such as tuna, would be available as well as easy-to-prepare canned beans, in addition to dried beans, officials said. The plan would also change the amount of infant formula provided to partially breastfed babies.

Increasing the voucher for fruits and vegetables to $25 a month during the pandemic has allowed Elizabeth Loya, 28, of Los Angeles, to encourage her 4-year-old daughter, Gisselle, to sample new foods.

“She tried Brussels sprouts and, two weeks ago, she tried asparagus,” Loya said. “She liked them.”

The proposed changes are based on a 2017 report from the National Academies of Science, Engineering and Medicine and the national Dietary Guidelines for Americans. They'll be evaluated after a three-month public comment period. ___

This story has been corrected to fix Geraldine Henchy’s title. She is the director of nutrition policy for the Food Research & Action Center, not the director of the center.