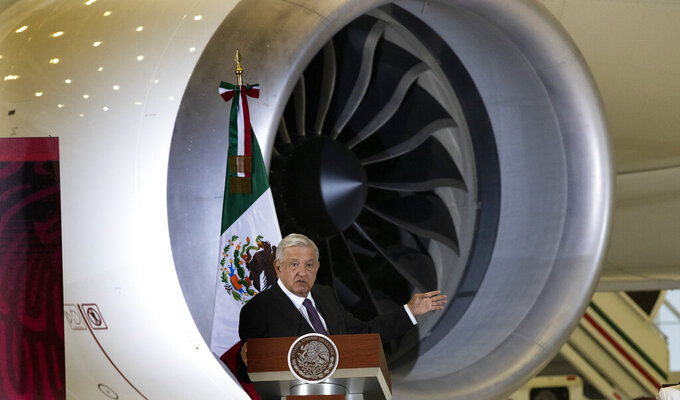 MEXICO CITY (AP) — Mexico’s president said Tuesday his government is analyzing the creation of a state-owned, army-run airline that would fly 10 leased airplanes as well as the former presidential jet.

The unusual plan would further boost the army's increasing economic role in Mexico.

The proposal was mentioned in a trove of army documents obtained by the Guacamaya hackers group and on Tuesday, President Andrés Manuel López Obrador confirmed the plan was under consideration.

López Obrador has already placed the armed forces in charge of building trains and airports, running federal law enforcement and a host of other tasks ranging from overseeing vaccine distribution to growing trees for forestry programs.

“An airline is being considered,” the president said, adding it could be named “Mexicana” after a defunct, partly state-owned carrier that went into bankruptcy in 2010, or “something to do with Mexico.”

“The economics of it, the feasibility, is being analyzed," he added. “It is very likely that the new airline will be ready next year.”

The idea combines López Obrador's love of state-owned companies — he has criticized decisions by previous administrations to sell off once-extensive government companies — and his near-total reliance on the armed forces, which he views as honest and a bulwark against corruption.

Already, a military-led company operates the new Felipe Angeles airport the president ordered built to serve Mexico City, and is constructing a new airport at the Caribbean coast resort of Tulum.

The army is also constructing that project, which will connect beach resorts and archaeological sites around the Yucatan Peninsula.

The army — which has no experience running commercial flights — would create a subsidiary in charge of providing air service to tourist resorts served by the Maya Train.

“This company, which is named Olmeca-Maya-Mexica, is going to operate the airport in Chetumal, the airport in Palenque,” López Obrador said, referring to other cities on the train route.

López Obrador suggested the new carrier might also serve one of the classic roles of state-owned carriers: providing service to provincial airports on routes that commercial airlines consider unprofitable.

“There are cities where there once were flights and there aren't anymore,” he said.

The plan could run afoul of regulations that currently prohibit airlines from running Mexican airports, or vice-versa.

López Obrador has refused to use the presidential jet acquired by his predecessors on the grounds it is too luxurious, and has tried unsuccessfully for four years to sell it. The president prides himself on his austerity and uses commercial flights.

At various times, López Obrador has made quixotic bids to sell off the presidential jet, rent it out for weddings or parties or to symbolically raffle it off

Under the new plan, the Boeing 787 would be turned over to the army-run company for use as a commercial jet.

The plane was purchased for $200 million and was used by the previous president, Enrique Peña Nieto. It has been difficult to sell because it is configured to carry only 80 people and has a full presidential suite with a private bath. Experts say it would be costly to reconfigure into a typical passenger jet that would carry up to 300 passengers.

Critics claim López Obrador has already given the armed forces too many roles. Mexico's military has traditionally stayed out of politics and had little role in the wider economy, but in recent decades it has taken on a major role in fighting drug cartels.

If the new plan goes through, it could make Mexico an outlier: Few other countries in Latin America, apart from Cuba, have the armed forces playing any significant role in tourism.

Earlier this year, López Obrador said he was putting the Mexican Navy in charge of running tours to the Islas Marias, a former island prison colony off Mexico's Pacific coast that the government hopes to turn into a tourist destination.