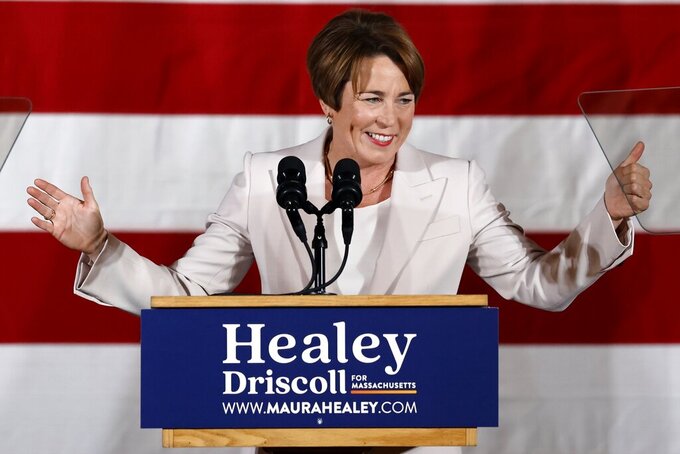 DES MOINES, Iowa (AP) — A record 12 women will take their seats as their state's highest-ranking elected officials when the nation's governors are sworn in this winter.

The number tops the high mark set in 2004 of nine, with The Associated Press' calling the Arizona governor's election for Democrat Katie Hobbs on Monday, as well as Democrat Maura Healey in Massachusetts and Republican Sarah Huckabee Sanders in Arkansas winning last week's elections.

“This is not an incremental growth. We're still far from political parity for women serving as chief executives. But it does feel like a breakthrough," said Debbie Walsh, director of the Center for American Women and Politics at Rutgers University. “It's significant particularly because these chief executive positions have been very hard to crack. These women in many ways disrupt fundamentally who a chief executive can be."

Sanders, the daughter of former Arkansas Gov. Mike Huckabee and White House press secretary during the Trump administration, will be the first woman to become her state's governor. Dobbs, on the other hand, will be her state's fifth woman in the governorship when she takes the oath of office in early January.

The dozen are decidedly Democratic in their makeup, with eight belonging to the party compared to four Republicans. That's in keeping with more women serving in elected office who identify as Democrats than Republicans in the U.S. House, Senate and in state legislatures.

Other firsts in the group include newly-elected Oregon Gov. Tina Kotek, who will be among the first two openly-lesbian governors with Healey in Massachusetts. Kotek is succeeding Gov. Kate Brown, a Democrat who identifies as bisexual and was the first openly LGBTQ woman in the United States elected governor in 2014.

Despite the gains, only one woman of color was elected governor. New Mexico Gov. Michelle Lujan Grisham, a Democrat who is Latina, was reelected. Three black women — Stacy Abrams of Georgia, Deidre DeJear of Iowa and Yolanda Flowers of Alabama — won the Democratic nomination for governor but were defeated by Republican incumbent governors last week.

The others are Republicans Kay Ivey of Alabama, Kim Reynolds of Iowa and Kristi Noem of South Dakota, and Democrats Kathy Hochul of New York, Janet Mills of Maine, Gretchen Whitmer of Michigan and Laura Kelly of Kansas.