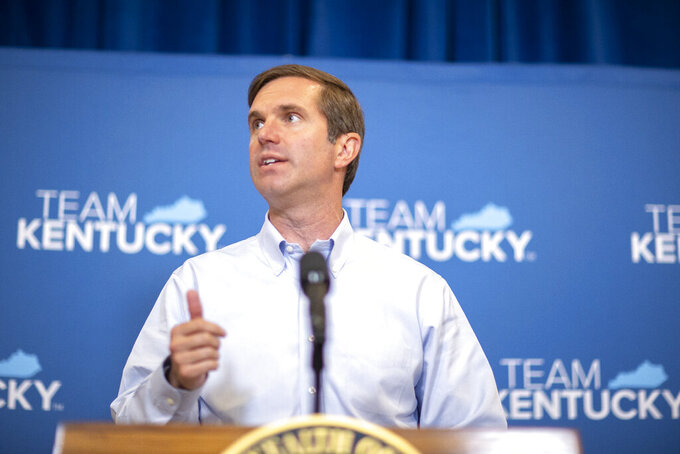 Since it's an off-year for elections, the governor will spend the weekend with his family, Beshear spokesman Sebastian Kitchen said Friday. Lt. Gov. Jacqueline Coleman also will skip the event, and instead will be doing volunteer work alongside her family, he said.

“Fancy Farm is a great tradition and we’re committed to returning in the near future,” Kitchen said in the statement.

The absence of the only two Democrats currently holding statewide office in Kentucky will make the political speaking even more lopsided in favor of Republicans.

Confirmed speakers so far include Republican U.S. Rep. James Comer and several statewide GOP officeholders and local Republican lawmakers, said Steven Elder, chairman of the picnic’s political speaking. The status for Republican U.S. Sens. Mitch McConnell and Rand Paul are listed as “pending” by picnic organizers, as the Senate's schedule remains uncertain. Paul will be on next year's ballot in seeking a third Senate term.

Beshear has said he intends to seek a second term in 2023.

It's not the first time a governor has bypassed the bluegrass state's premiere political spectacle. Beshear's predecessor, Republican Matt Bevin, also skipped the picnic. Elder expressed disappointment Friday that Beshear will be absent but said the event will go on.

“Our picnic is ultimately a fundraiser for our local parish and a homecoming of sorts for the families in the area,” he said. “We are saddened by not having our governor attend, but the picnic will continue on for the 141st event just as we have since 1880.”

The picnic — also known for its barbecue — draws large crowds and is set for Aug. 7 in the far western Kentucky community of Fancy Farm. Last year’s picnic was scaled back and the political speeches were canceled amid the coronavirus pandemic. The political showdown is a rite of passage for statewide candidates in Kentucky.

Though he's not attending, the governor is urging anyone planning to attend the picnic to be vaccinated against COVID-19, Kitchen said. Coronavirus cases are rising again in Kentucky, with the growing prevalence of the delta variant.

Picnic organizers are committed to following all recommended federal and state guidelines, Elder said, adding that "we will continue monitoring and adjust as needed.