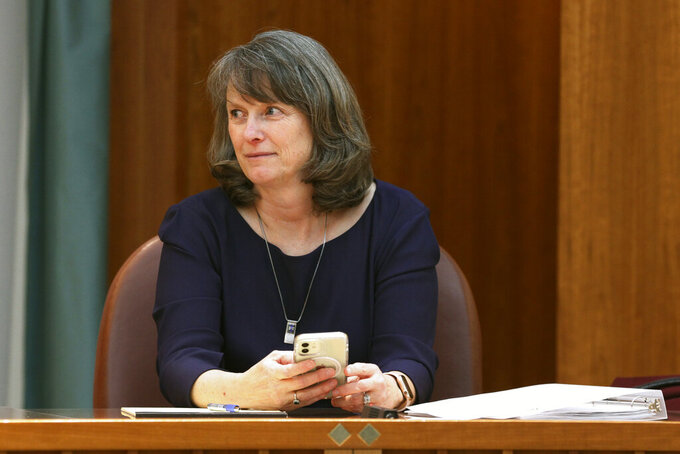 Morgan Lee, ASSOCIATED PRESS
State Canvassing Board members, including state Supreme Court Chief Justice Shannon Bacon, certify results from the midterm election in New Mexico in a 3-0 vote amid praise for election administrators and poll workers, in Santa Fe, N.M., Tuesday, Nov. 29, 2022. The board meeting at the state Capitol building was the culmination a once-routine election certification process that in some locations has become a focal point for those voicing distrust in voting systems. (AP Photo/Morgan Lee)

SANTA FE, N.M. (AP) — New Mexico's state Canvassing Board certified results from the midterm election on Tuesday in a 3-0 vote amid praise for election administrators and poll workers.

The board meeting at the state Capitol building was the culmination a once-routine election certification process that in some locations has become a focal point for those voicing distrust in voting systems.

Election results have largely been certified without issue in jurisdictions across the country, though Republican officials in a rural Arizona county have so far refused to do so despite a lack of evidence of any problems with the count.

Canvassing boards in each of New Mexico’s 33 counties certified results of the Nov. 8 election, in which Democrats maintained control of every statewide elected office and flipped a congressional seat.

In New Mexico, doubts about the 2020 election were fueled by a lawsuit from Donald Trump’s campaign and a fake set of electors willing to certify him. This year, an assortment of local and out-of-state Trump allies held forums throughout the state promoting conspiracy theories about elections, including former White House strategist Steve Bannon, MyPillow CEO Mike Lindell and the Republican nominee for secretary of state, Audrey Trujillo.

In the state's June primary, the Otero County commission initially refused to certify results citing distrust of vote tallying systems — even though the county's top elections regulator said there were no problems. The commission reversed course on a 2-1 vote to certify the primary after Toulouse Oliver successfully petitioned the state Supreme Court to issue an order directing the local board to certify.

Republicans are challenging the new outline of the 2nd District under a redistricting plan from Democratic lawmakers that divvied up a politically conservative oilfield region among three congressional districts.

Statewide certification of the vote also initiated automatic recounts for two state House seats. Democrats won at least 44 seats out of 70, not including the contests subject to a recount.

Incumbent Democratic state Rep. Candie Sweetser is vying against Republican Jenifer Marie Jones in a district that extends across the “bootheel" of southwestern New Mexico, including the cities of Deming, Lordsburg and Columbus.

In the northwest reaches of Albuquerque, Republican Robert Henry Moss is competing for an open state House seat against Democrat Charlotte Little.