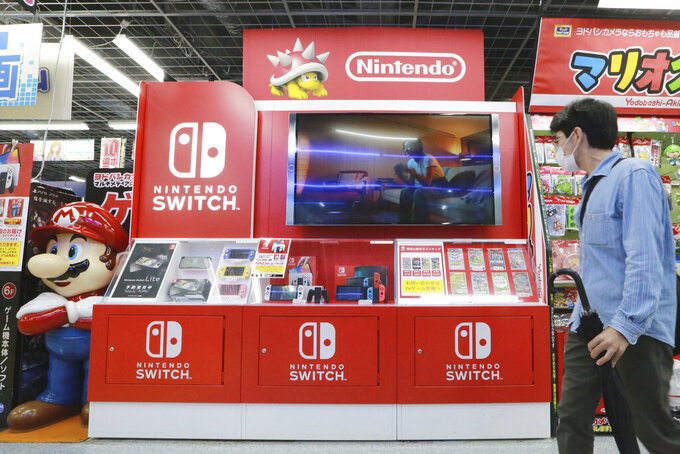 Koji Sasahara, ASSOCIATED PRESS
A man walks by Switch from Nintendo at an electronics retail chain store in Tokyo on Oct. 13, 2021. The shortage in computer chips needed to make the Nintendo Switch machine continues to be a serious problem without prospects for a quick fix, the Japanese video-game maker's president, Shuntaro Furukawa, said Friday, Nov. 5, 2021. (AP Photo/Koji Sasahara)

TOKYO (AP) — The shortage in computer chips needed to make the Nintendo Switch machine is a serious problem unlikely to be resolved soon, the president of the Japanese video-game maker said Friday.

Furukawa said the dearth of computer chips, which is affecting manufacturing of many products, was behind Nintendo's decision to cut its forecast for Switch sales for the fiscal year through March to 24 million machines from an earlier 25.5 million units.

He said plans for the next fiscal year and beyond were even more difficult to predict.

Production and shipping disruptions related to the coronavirus pandemic are plaguing electronics manufacturers, automakers and many other industries.

Kyoto-based Nintendo Co. said the lack of chips was also hurting design efforts for its next game machine. Nintendo is developing a device to follow the Switch, although it has not said when sales will begin.

Software development, including applications for mobile devices, has not been hindered by such problems, said Shigeru Miyamoto, the company’s star game designer.

The Super Mario movie, a collaboration with U.S. studio Illumination, won’t be released until December 2022, Miyamoto said. Other movies may be in the works.

Furukawa said Nintendo hopes that goods and theme parks will help coax people to become interested in his company’s games.

Nintendo faces competition both from longtime rivals such as Microsoft Corp. and Sony Corp. which offer their own game consoles, and also from newcomers to gaming, like Netflix and Google.

On Thursday, the company reported a 19% profit drop for the fiscal first half, mainly because of a significant boost in profit the previous year, when people stuck at home by the pandemic turned to its products. Nintendo’s April-September profit totaled 171.8 billion yen ($1.5 billion), down from 213 billion yen.