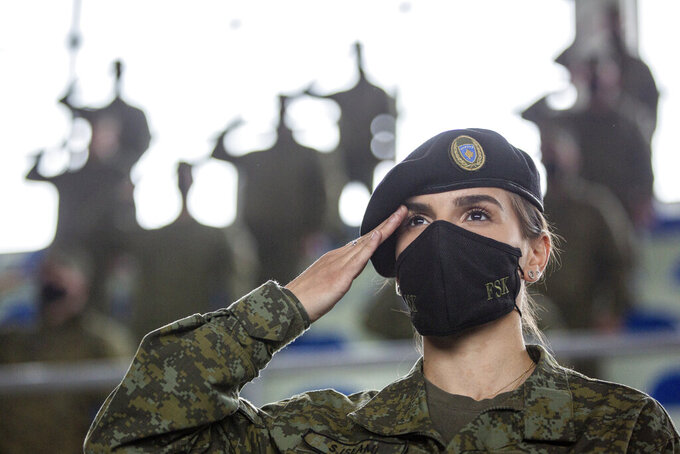 Visar Kryeziu, ASSOCIATED PRESS
A Kosovo Security Force (KSF) member wearing a face mask salutes, during a peacekeeping mission deployment ceremony held at the army barracks in Pristina, Tuesday, March 9, 2021. Kosovo is sending a military platoon to Kuwait, its first ever involvement in an international peacekeeping mission. A ceremony was held Tuesday at the army barracks in the capital, Pristina, with the presence of top country leaders and western military attaches. Kosovo is sending the military unit following a request from the U.S. Central Command. (AP Photo/Visar Kryeziu)

PRISTINA, Kosovo (AP) — Kosovo on Tuesday sent a military platoon to Kuwait to take part in the country's first ever international peacekeeping mission.

A ceremony was held at the army barracks in the capital, Pristina, in the presence of top leaders and western military attaches.

Kosovo is sending the unit on a six-month tour following a request from the U.S. Central Command. Its troops will be under the command of the National Guard of Iowa.

The Defense Ministry said the Kosovo unit “will operate under the Central Command of the American forces responsible for a geographic zone, including the Middle East, part of South Asia and Northeastern Africa.”

No specifics on the exact location in Kuwait or the number of Kosovo peacekeepers to be deployed were made public. A platoon of 32 soldiers was seen lined up during the ceremony.

Kuwait and the United States have a formal Defense Cooperation Agreement and approximately 13,500 U.S. forces are based in Kuwait, primarily at Camp Arifjan and Ali Al Salem Air Base. Since 2004, Kuwait has been designated as a major non-NATO ally.

“The partnership between Iowa's National Guard and the KSF greatly contributes to these efforts and demonstrates to others what is possible by working hard and relationship,” he said.

The 3,400-troop Kosovo Security Force was turned into a regular army two years ago, although its name has not been changed to armed forces as planned.

In about a decade, Kosovo’s lightly armed army is expected to have 5,000 troops and 3,000 reservists tasked with handling crisis response and civil protection operations. They are heavily supported by the United States.

A brutal 1998-1999 war between separatist ethnic Albanian rebels and Serb forces ended after a 78-day NATO air campaign that drove Serb troops out and a peacekeeping force moved in. Kosovo declared independence from Serbia in 2008. It is recognized by most Western nations but not by Belgrade and its allies Russia and China.

Tensions over Kosovo remain a source of volatility in the Balkans.