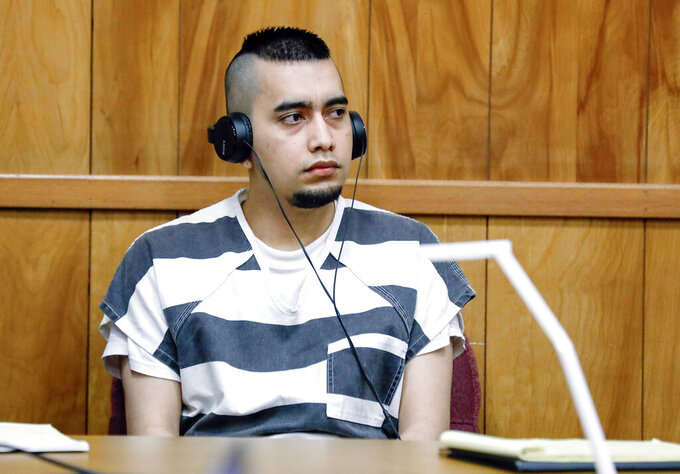 Jim Slosiarek, ASSOCIATED PRESS
FILE - In this July 15, 2021, file photo, Cristhian Bahena Rivera appears during a hearing at the Poweshiek County Courthouse in Montezuma, Iowa. Bahena Rivera was convicted of killing University of Iowa student Mollie Tibbetts in 2018. The lead investigator in the death, Division of Criminal Investigation agent Trent Vileta expressed confidence Tuesday, July 27, 2021, that the right man was convicted, rejecting defense claims that her abduction could be tied to other local criminal suspects. (Jim Slosiarek/The Gazette, Pool, File)

DES MOINES, Iowa (AP) — A judge on Monday rejected a convicted man's request for a new trial in the 2018 killing of University of Iowa student Mollie Tibbetts, whose body was found in a cornfield weeks after she disappeared while out for a run near her small hometown.

Judge Joel Yates' ruling cleared the way for sentencing to proceed Aug. 30 in the trial of Cristhian Bahena Rivera, who was convicted in May of first-degree murder in Tibbetts' death. The former farmhand, who came to the U.S. illegally as a teenager, faces a sentence of life in prison.

Yates rejected efforts by Bahena Rivera’s attorneys to implicate others, saying much of the evidence they presented after he was convicted was known to them before the verdict was handed down. To grant a new trial, any additional evidence would have to be new and revealed after the verdict, he wrote.

The judge also said many of the new allegations conflicted with trial testimony and evidence presented by Bahena Rivera’s own witnesses.

“In reviewing the evidence and testimony provided at trial, the court finds the verdict was not contrary to the weight of the evidence,” Yates wrote.

During questioning by police, Bahena Rivera acknowledged that he encountered Tibbetts as she was running near her small eastern Iowa hometown of Brooklyn and he led investigators to the field where her body lay hidden under cornstalks.

But during his trial, he claimed publicly for the first time that two masked men kidnapped him at gunpoint from his trailer, forced him to drive to where Tibbetts was running on a rural road, killed her, put her body in his trunk and made him dispose of it. He said he didn’t tell investigators about the two men earlier because they had threatened to kill his ex-girlfriend and young daughter.

Bahena Rivera was to be sentenced last month. But toward the end of the testimony portion of his trial, two new witnesses came forward independently of one another and told police that a local 21-year-old man told them he had killed Tibbetts. Defense lawyers requested a new trial based on that and other newly discovered information, and Yates agreed to postpone sentencing while he considered their request.

At a hearing last week, Bahena Rivera’s lawyers sought to link Tibbetts’ death to another young woman’s report of having been kidnapped and sexually assaulted at an area home used for sex trafficking in the summer of 2018, and the recent disappearance of an 11-year-old boy from the same county. A 50-year-old suspected methamphetamine dealer has been investigated in both cases but hasn’t been charged in either, and prosecutors say he has no ties to Tibbetts.

Prosecutors have said they were confident that Bahena Rivera killed Tibbetts and they pointed out that his own account of what happened didn’t align with what the two new witnesses told police.

“We are pleased that the judge upheld the jury’s verdict and we look forward to moving to sentencing,” said Lynn Hicks, a spokesman for the state attorney general.

Attorneys for Bahena Rivera did not immediately reply to messages seeking comment.