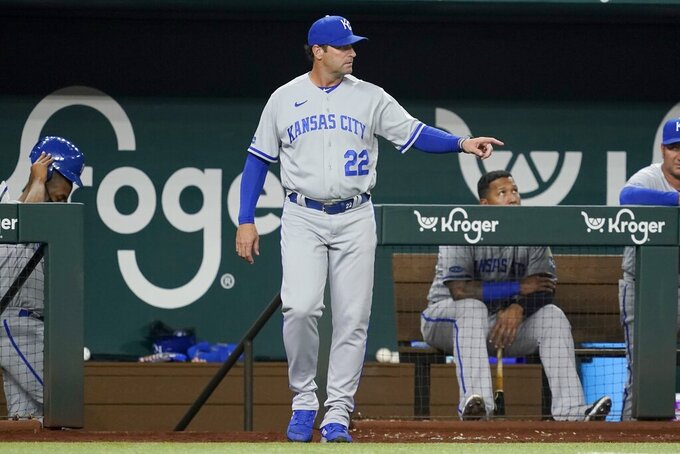 KANSAS CITY, Mo. (AP) — The Kansas City Royals fired hitting coach Terry Bradshaw and promoted Alex Zumwalt to fill his role Monday in a shakeup of the coaching staff that they hope will wake up one of the worst offenses in the majors this season.

The Royals have scored 118 runs through their first 32 games, better only than the Tigers, Orioles and White Sox, and their 21 home runs trail only the Tigers and Red Sox for the worst total in the big leagues.

“Baseball is constantly shifting and we have to continue to self-evaluate and make sure we're giving our players everything they need to be successful at the highest levels,” Royals general manager JJ Picollo said in a statement. “Our results so far haven’t matched what we’re capable of, and we all share accountability in that.”

Zumwalt was hired as a scout in 2011 but more recently has spearheaded a shift in hitting development within the Royals' minor league program. The results last season were evident in Bobby Witt Jr. earning the Minor League Player of the Year award from Baseball American and MJ Melendez taking the Joe Bauman Award as the minor league home run champ.

Both of those players are with the big league club this season.

“Changes like this are never easy and I’m grateful to Terry for his friendship and all he’s done for me personally and for our team,” Royals manager Mike Matheny said before opening a four-day, five-game set against the White Sox. “We can all do better, and that includes me. I’m confident that better days are ahead, and that Alec, Keoni and Mike will help us get there.”

Bradshaw had been with the Royals system since 2000 and helped to usher to the majors Mike Moustakas and Eric Hosmer, two of the cornerstones of their 2015 championship team. He also helped Whit Merrifield lead the American League in hits twice and Jorge Soler break the club's single-season home run record, which Salvador Perez matched last year.

“Terry is one of the finest men I’ve known in baseball,” Royals president Dayton Moore said. “The Royals are a better franchise with and because of men like Terry. We thank him and his family for all they’ve done."