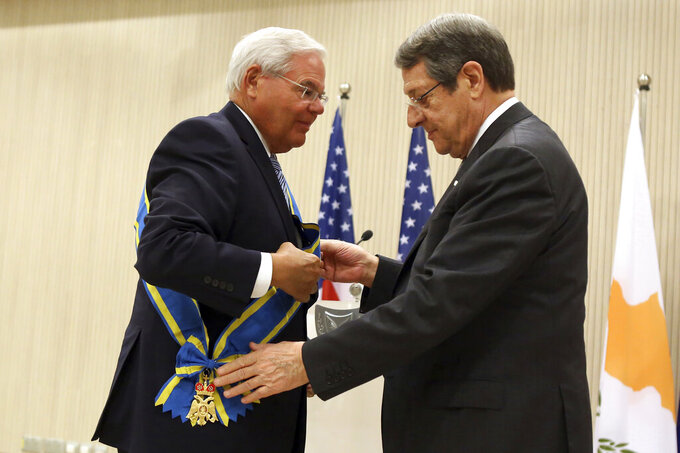 NICOSIA, Cyprus (AP) — The chairman of the U.S. Senate Foreign Relations Committee said on Monday that the “retrograde vision” of Turkey’s president to cement Cyprus’ ethnic divide by striving for a two-state deal “is wrong” for all Cypriots.

Robert Menendez, a Democratic senator from New Jersey, said a peace accord for Cyprus based on two separate states “flies in the face” of U.N. Security Council resolutions as well a decades-old arrangement between Greek and Turkish Cypriot negotiators to reunify Cyprus as a federation.

Speaking after receiving Cyprus’ highest honor — the Grand Collar of the Order of Makarios III — from President Nicos Anastasiades at a ceremony, Menendez said Greek Cypriots and Turkish Cypriots could strike a reunification deal if left to negotiate on their own.

Cyprus has been divided into a breakaway Turkish Cypriot north and a Greek Cypriot south where the island’s internationally recognized government is seated since 1974, when Turkey invaded following a coup aiming at union with Greece.

Only Turkey recognizes a Turkish Cypriot declaration of independence and maintains more than 35,000 troops in the north.

Nearly half a century of U.N.-backed peace talks have failed to produce a mutually acceptable deal. Turkey contends that talks for a federation-based deal have run their course and that an agreement based on two states is now the only way forward.

Menendez has been a vocal proponent of negotiations and a strident critic of what Greek Cypriots say are Turkey’s attempts to steer the talks toward achieving its ambition for regional control by keeping a permanent troop presence on the island and the right to militarily intervene.

“My goal is to see the last Turkish soldier leave the island,” Menendez said.