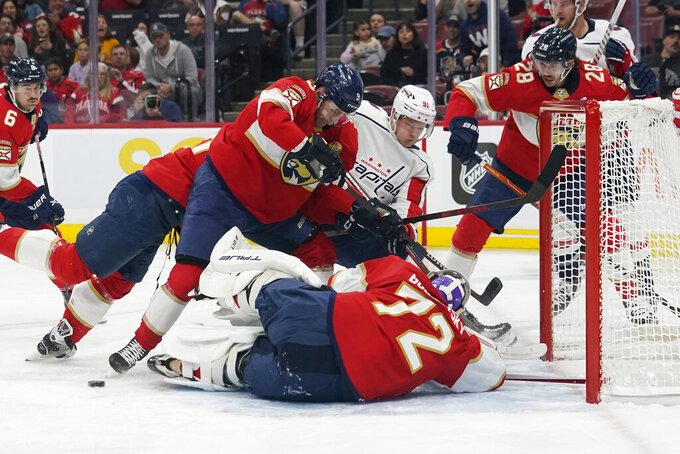 Verhaeghe, who had six goals and 12 points in Florida’s six-game playoff series win over Washington last spring, scored on a loose puck to give the Panthers a two-goal lead with 3 minutes remaining before scoring into an empty net with 1:24 left.

“They keep telling me I am a shooter, so I just try to shoot the puck and I have two great guys next to me,” said Verhaeghe, who leads Florida with 10 goals. “The line has been good and the puck is going in.”

Florida also got goals from Aleksander Barkov, Sam Reinhart and Nick Cousins, while Sergei Bobrovsky made 41 saves for his first win since Nov. 3.

Florida improved to 5-1-1 at home and is on a 16-2-1 regular-season run in Sunrise dating to last season.

Bobrovsky, making his first start since Nov. 5 at Los Angeles, only faced nine shots in the opening period before the Capitals started to warm up.

Barkov gave the Panthers the initial lead, blasting a shot past Darcy Kuemper (38 saves) from the high slot. It was Barkov’s fourth goal of the season and first not on a power play.

Reinhart got a power-play goal for the Panthers — their eighth in the past nine games — by batting a shot by Aaron Ekblad out of the air.

Matthew Tkachuk recorded his 400th career point with the secondary assist on the goal.

Holding a 2-1 lead going into the third, Cousins gave Florida some breathing room by snaring a pass from Gustav Forsling and driving around Kuemper, scoring as he lost his footing at 7:02 of the period.

Carlson brought the Capitals within a goal by driving between two defenders and knocking in a shot from Erik Gustafsson past Bobrovsky.

“We had a fantastic start and then found ourselves out of rhythm,’’ said Florida coach Paul Maurice, whose team went 5-for-5 against the Washington power play. “Penalty killing was the defining piece to our game and our power play went 1-for-1 and we needed it.”

Washington went 0-2 on this trip to Florida, getting outscored 10-3 by the Panthers and Tampa Bay Lightning.

“Our second was better than the first and our power play had lots of chances but could not get one through,” Washington coach Peter Laviolette said. “We did good things defensively but there were breakdowns when we could have and should have done something. ... I thought we played hard in the last 40 minutes and pushed hard to get that win but we couldn’t seem to get ahead of the score, get where we wanted to go.”

NOTES: Maurice coached his 1,700th NHL regular-season game, which ranks fourth all-time. Maurice, 55, coached in his first game on Nov. 7, 1995 with the Hartford Whalers. He has coached the Whalers/Hurricanes (twice), Maple Leafs, Jets and Panthers. He passed Al Arbour for sixth all-time in victories with No. 783 last Wednesday against Carolina. ... Laviolette returned to the Washington bench following a two-game absence after testing positive for COVID-19. Assistant Kevin McCarthy coached the team in its two games against Tampa Bay. ... Forwards Connor McMichael and Nicolas Aube-Kubel as well as defenseman Alexander Alexeyev were healthy scratches for the Capitals.