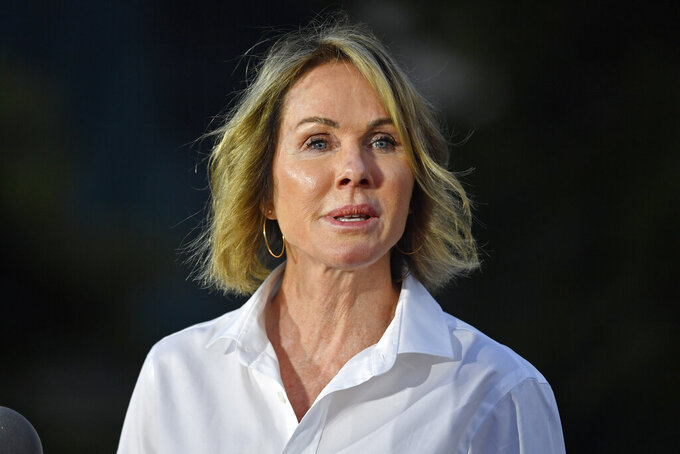 Kentucky Republican gubernatorial candidate Kelly Craft selected state Sen. Max Wise as her running mate Wednesday evening, making an early commitment to a political partnership with the conservative lawmaker that she hopes will boost her primary bid next spring.

Craft — a former U.S. ambassador to the United Nations during Donald Trump's presidency — announced her choice for lieutenant governor during an event in Wise's hometown of Campbellsville in rural south central Kentucky.

“When I thought about selecting a partner to lead our state, I knew it had to be a person who inspires respect, who has already shown commitment to Kentucky and – most important in public life – someone in whom we can place full trust,” Craft said in prepared remarks. “As soon as I lined up those qualities, the first name that leaped to mind was Max Wise.”

A 2020 change in Kentucky law allows candidates for governor to wait until after the primary election to pick their running mate. In the past, gubernatorial hopefuls selected their slate-mate by the January filing deadline of the election year.

Craft opted to lock onto a political partner some eight months before the primary. Other Republican candidates have yet to make their pick, such as Attorney General Daniel Cameron, state Agriculture Commissioner Ryan Quarles, state Auditor Mike Harmon, state Rep. Savannah Maddox. Retired attorney Eric Deters, another GOP gubernatorial candidate, also has picked a running mate — Wesley Deters, a northern Kentuckian and a former city council member. They are not related.

The race for the Republican gubernatorial nomination is likely to dominate the state's political landscape until the primary in May. Democratic Gov. Andy Beshear is seeking a second term next year. Beshear has received strong approval ratings from Kentuckians in polling as he tries to overcome the state's tilt toward the GOP. Lt. Gov. Jacqueline Coleman, who will be Beshear’s running mate again in 2023, has focused on education and economic development issues during her term.

By choosing Wise, Craft will have the advantage of dispatching a teammate to promote her candidacy as the campaign intensifies. Wise immediately jumped into the fray, promoting Craft's credentials while making much of Beshear's often-rocky relationship with the GOP-led legislature.

“We’ve all watched Kelly take Kentucky values throughout the world, first as President Trump’s ambassador to Canada and then as his delegate at the United Nations, where she looked dictators in the eye and didn’t blink,” Wise said in prepared remarks.

Wise tried to connect Beshear to Democratic President Joe Biden — who was trounced by Trump in Kentucky in the 2020 election. And Wise slammed the governor's leadership style, accusing Beshear of a “closed-door policy when it comes to working with the legislature.”

“There is no ‘Team Kentucky’ with Andy Beshear,” Wise said, invoking the “Team Kentucky” phrase often used by the governor at press briefings. “Andy Beshear is a team of one and I have seen it firsthand as a legislator.”

The criticism comes about a month after Beshear worked with the legislature on a nearly $213 million aid package for flood-ravaged portions of eastern Kentucky. It resembled the bipartisan cooperation on a similarly big relief package earlier this year for parts of western Kentucky devastated by tornadoes in December. The governor also has worked with the legislature on economic development initiatives. During his term, Beshear helped the state land two massive battery production projects for Kentucky to power future generations of electric vehicles.

Responding to Craft’s announcement, Kentucky Democratic Party Chair Colmon Elridge said the early selection of Wise “confirmed” that Craft “does not have the experience to run or serve as governor on her own.”

Wise has played a key role in shaping education policy as chairman of the Senate Education Committee. He was at the forefront as lawmakers passed school safety legislation in response to school shootings nationwide, including at a western Kentucky high school where two students were killed. He was a leading supporter of a measure designating a set of historical documents and speeches to incorporate into classroom work — a response to the national debate over critical race theory.

In his statement, Elridge tied Wise to legislation paving the way for the introduction of charter schools, saying the result will be “taking money out of public education.”