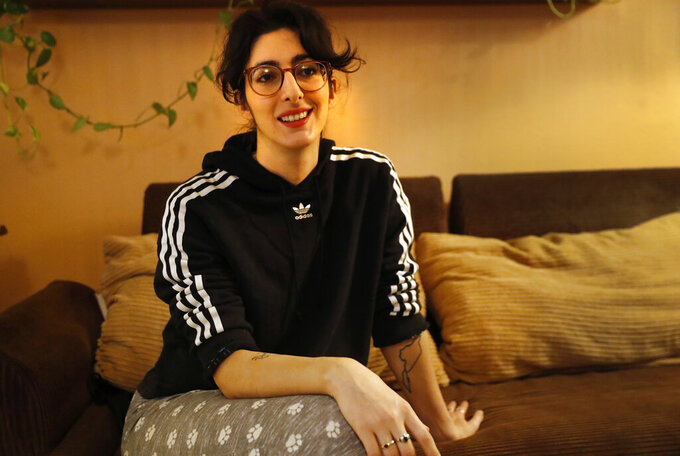 Hussein Malla, ASSOCIATED PRESS
Nada Homsi, a freelance American journalist who was detained in Beirut last month, smiles during an interview with The Associated Press, in Beirut, Lebanon, Wednesday, Dec. 8, 2021. Homsi released by Lebanese authorities on Wednesday just hours after two international human rights groups called her detention arbitrary and demanded that she be set free. Homsi said after her release that her arrest was part of an intimidation campaign used by Lebanon's security agencies against foreign journalists. (AP Photo/Hussein Malla)

Nada Homsi, the journalist, said after her release that her arrest was part of an intimidation campaign used by Lebanon's security agencies against foreign journalists.

Human Rights Watch and Amnesty International said Homsi was arrested without a judicial order on Nov. 16 by members of Lebanon’s General Security Directorate. The reasons for the raid remain unknown and her detention is now arbitrary, the groups had said.

“I feel good that I’m free but I shouldn’t have been arrested in the first place,” Homsi told The Associated Press, adding that Lebanese security agencies are “going after foreign journalists so that they can’t cover things that are happening in Lebanon.”

Since Lebanon's economic meltdown began two years ago, many foreign and local journalists have reported on widespread corruption among the country's political class, which has been running the small nation since the end of the 1975-90 civil war.

“Nada is at home and the decision to deport her has been dropped,” Homsi’s lawyer, Diala Chehade, told the AP, adding that all her papers and documents were given back to her.

Earlier, Chehade said that security force that raided Homsi’s apartment found a small amount of cannabis. Chehade said the officers then called the public prosecutor, who issued an arrest warrant for Homsi and her partner, a Palestinian national. The officers confiscated her electronics and some documents, she said.

General Security members are deployed at Lebanon's border crossings, ports and the country’s only international airport, and the department usually deals with foreigners by issuing visas and residency permits.

“Not only did General Security officers raid Homsi’s apartment without producing a judicial warrant, but they also violated her rights in detention by denying her access to a lawyer,” said Aya Majzoub, Lebanon researcher at Human Rights Watch.

Chehade said Homsi lives in Beirut's predominantly Christian neighborhood of Achrafieh and had earlier this year raised a Palestinian flag on her apartment. This angered a district administrator who complained to the Lebanese army. Army intelligence members then came to the apartment and asked Homsi to remove the flag, which she did, Chehade said.

Homsi wrote a post on her Facebook account detailing the flag incident in May, her lawyer said. “I believe this was the motive that led to the raid,” Chehade said, adding that they found the cannabis during the raid.

The two rights groups said that although the public prosecutor ordered her release on Nov. 25, General Security issued a deportation order for her and “continues to detain her arbitrarily.”

On her Twitter account, Homsi writes that she is currently working for National Public Radio and usually writes about Syria and Lebanon. Homsi has worked with several Arab and international outlets, including most recently, NPR.

General Security officers had continued to insist that Homsi was being detained “for security reasons,” but they have failed to provide any details to Chehade to allow her to prepare a defense, the group said. They added that no security or military charges have been filed against Homsi, but she was charged for consumption of drugs.

Chehade filed a request to release Homsi on Nov. 25, and on the same day, the Beirut Public Prosecutor ordered her release. However, General Security continued to detain Homsi under the pretext that she was working in the country without a proper work permit.

Chehade said General Security officials told her Homsi is under arrest for security reasons, without saying what the reasons are.

“The continuation of the arrest is either a stubborn act by General Security or a deliberate policy that they have done with other foreigners before” to deport them, Chehade said.