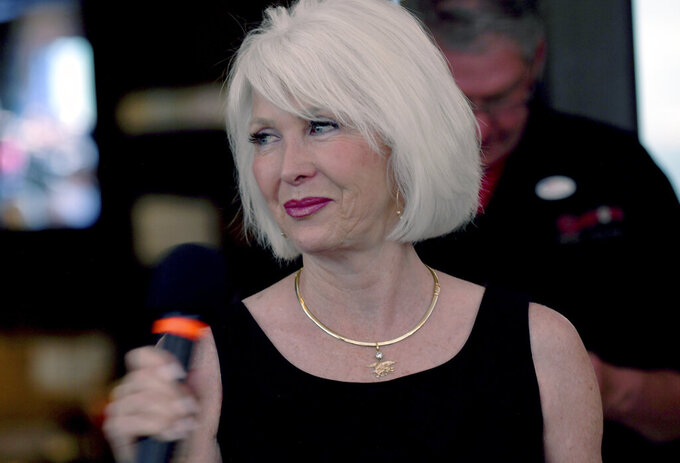 DENVER (AP) — A judge on Tuesday threw out a lawsuit challenging a primary election recount lost by an indicted Colorado county clerk who alleged voting fraud in her failed bid to become the state's top election official.

Mesa County Clerk Tina Peters filed a lawsuit objecting to the methods used to recount ballots on Aug. 3 but did not ask for the recount to be stopped until the following day, after the recount was completed and several hours after the recount results had been certified by Colorado Secretary of State Jena Griswold. Judge Andrew P. McCallin ruled that election law only gives him the authority to consider recount challenges while a recount is underway and his jurisdiction stops once it is over and is certified.

The recount barely changed the results of the primary election to choose a Republican candidate to challenge Griswold in November’s election with Peters picking up 13 more votes, ending up with about 29% of the vote, according to the secretary of state. Pam Anderson finished in first place with 43% of the vote.

According to McCallin's ruling, Peters said that the recount could still be challenged because she claimed it was not conducted under the methods outlined in the law. However, McCallin said that argument would allow a recount to be subject to challenge long after it was completed, pointing out that the law lays out ways for challenges to be quickly resolved so election deadlines can be met.

“Allowing these orders to be challenged later would destabilize elections and leave them open for challenge long after the Secretary of State certifies results,” he said.

Peters' lawsuit claimed that the accuracy of randomly selected machines used to count ballots should have been verified with a hand count of ballots before the recount began.

Peters did not immediately respond to emails or a text seeking comment. Her lawyer in the case, David Wilson, said they disagree with the judge's ruling and are exploring what to do next.

Some recount observers reported that election machines were tested with test ballots instead of actual ballots cast by voters, Wilson said.

Peters faces several felony charges for her alleged role in allowing unauthorized people to break into her county’s election system in search of proof of the conspiracy theories spun by former President Donald Trump after his 2020 election loss.

She has denied she did anything illegal and contends the charges are politically motivated. She is scheduled to appear in court Wednesday to enter a plea to those charges.