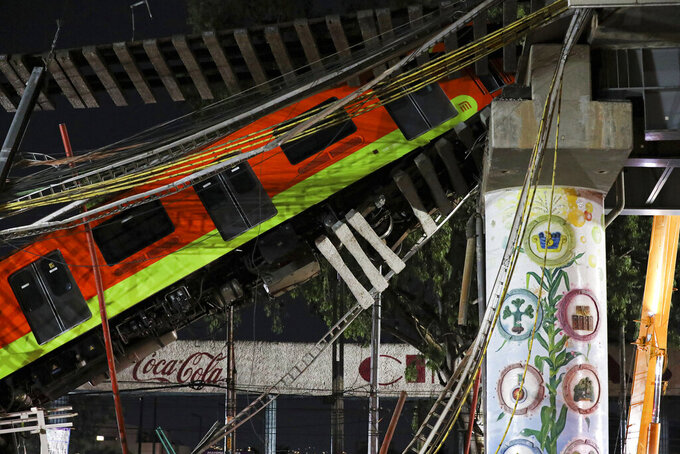 Marco Ugarte, ASSOCIATED PRESS
FILE- In this May 4, 2021 file photo, Mexico City's subway cars lay at an angle after a section of Line 12 of the subway collapsed in Mexico City. Mexico City´s prosecutor´s office concluded Thursday, Oct. 14, 2021, that the accident was due to mistakes made during the construction of the metro line and that it will prosecute those involved in the crash. (AP Photo/Marco Ugarte, File)

MEXICO CITY (AP) — Mexico City prosecutors announced Monday they have brought criminal charges against 10 “individuals and companies” for construction and design defects that caused an elevated subway line to collapse in May, killing 26 people.

Ulises Lara, the spokesman for the city attorney general, said the charges are for negligent or involuntary homicide, damages and causing injuries. Lara did not name those charged, in keeping with presumption of innocence rules.

But local media reported they included former city officials responsible when the subway line was built more than a decade ago.

Lara said that no arrest warrants were issued for those involved and that they would be told to appear before a judge at the initial hearing in the case, scheduled for Oct. 25.

In the case of the companies involved, prosecutors have said the goal of the criminal charges is aimed at making them pay for or repair damages both to the subway and the victims. Criminal charges against individuals could apparently result in prison sentences for them.

The prosecutors’ report, presented last week, was similar to, but a bit broader than, the conclusions presented by the private Norwegian certification firm DNV in September.

But prosecutors also cited bad welds in the steel beams underlying the concrete track bed that either failed to adhere or split. Steel struts intended to stiffen the metal beams were too short or not properly attached, and the elevated line was not designed with enough of a safety margin.

The defects distorted the train line’s framework, leading to “fatigue cracks” that reduced the structure’s ability to bear weight.

The $1.3 billion Line 12 of Mexico City’s metro system was built between 2010 and 2012 when current Foreign Affairs Secretary Marcelo Ebrard was the capital’s mayor. Ebrard is seen as one of the likely contenders to succeed President Andrés Manuel López Obrador.

The project was plagued by cost overruns and alleged design flaws, corruption and conflicts of interest.

The city was forced to close the line in 2014, just 17 months after it was inaugurated, so tracks could be replaced or repaired. The section that collapsed has remained closed since May.

Some companies involved in the original construction have since argued that heavier ballast and other changes and repairs over the years may have added too much weight to the elevated line or that it might have been weakened by Mexico City’s frequent earthquakes.