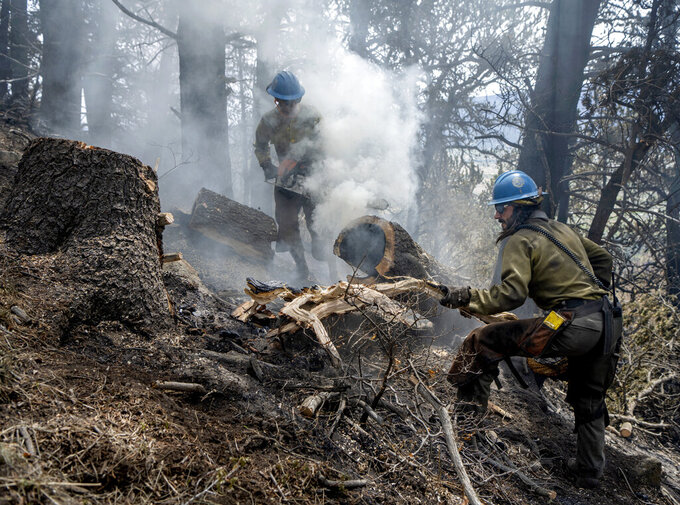 Eddie Moore, ASSOCIATED PRESS
Carson Hot Shots Henry Hornberger, left, and Tyler Freeman cut up a hollow tree that was burning on the inside, Monday May 23, 2022, as they and their co-workers work on hot spots from the Calf Canyon/Hermits Peak Fire in the Carson National Forest west of Chacon, N.M. Crews in northern New Mexico have cut and cleared containment lines around nearly half of the perimeter of the nation’s largest active wildfire while bracing for a return of weather conditions that might fan flames and send embers aloft. (Eddie Moore/The Albuquerque Journal via AP)

SANTA FE, N.M. (AP) — Crews in northern New Mexico have cleared and cut containment lines around nearly half of the perimeter of the nation's largest active wildfire while bracing for a return of weather conditions that might fan flames and send embers aloft, officials said Thursday.

The 7-week-old fire east of Santa Fe was boxed in around 46% of its 635-mile (1,022-kilometer) perimeter, enclosing an area larger than Oklahoma City.

Recent weather that included lighter winds, cloud cover and light rain and snow in some areas helped firefighters’ effort to surround the fire and slow its growth. But forecasts for Friday and through the holiday weekend call for higher temperatures, less humidity and stronger winds.

The National Weather Service issued fire weather watches for the region on Saturday.

Fire behavior analyst Stewart Turner said at a briefing Thursday night he doesn't expect “any big growth” in the blaze on Friday, but that could change because “we are extremely dry.”

Saturday "should be a big fire day ... as well as Sunday and Monday, and probably Tuesday,” he said. “Stay tuned and see how those days start shaping up, but they're not looking all that good for fire weather.”

Crews continued to battle a handful of other large fires in New Mexico and Arizona in areas of forest, brush and grass in a region that many fire managers have described as “ripe and ready to burn” due to a megadrought that has spanned decades and warm and windy conditions brought on by climate change.

Jayson Coil, an operations section chief, said crews were clearing containment lines and retracing their steps in some areas to strengthen lines already in place.

“Everything we’re doing right now is to make sure we’re prepared for the potential of high winds and the limitations that those brings, along with the potential for large fire growth,” Coil said.