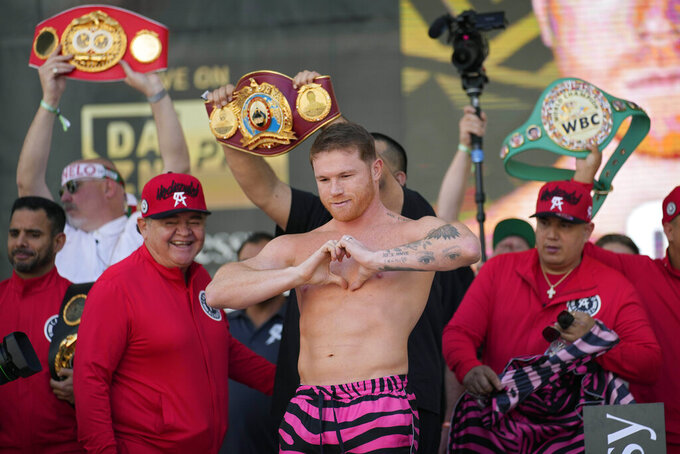 LAS VEGAS (AP) — Saul “Canelo” Álvarez remains supremely confident as he moves back up to the heaviest weight of his career for another hefty challenge.

Álvarez (57-1-2, 39 KOs) is favored to take the WBA 175-pound title from unbeaten Dmitry Bivol on Saturday night at T-Mobile Arena on the Las Vegas Strip.

The pound-for-pound superstar has fought at light heavyweight only once previously in his career, taking out a past-his-prime Sergey Kovalev in late 2019. With victories over practically every established opponent at super middleweight, the division in which he became the undisputed champion last year, Álvarez is eager to take on the larger, rangier Bivol (19-0, 11 KOs) to add another achievement to his overflowing collection.

Bivol presents a much stiffer challenge than Kovalev did to Canelo. The Kyrgyzstan-born Russian champion has held a version of his belt since May 2016, making several title defenses against a litany of top 175-pounders.

Bivol has never fought an opponent of Álvarez's caliber, but he welcomes the lucrative opportunity to test his skills against arguably the world's most accomplished active fighter.

“I'm really glad that I got this opportunity,” Bivol said through a translator. “I've asked my team for many years to fight the best guys, and now I've got this fight. I had a long journey to get to here, and now I just want to do my job.”

Bivol is several inches taller than Álvarez, and his superior reach will present difficulties for Canelo to overcome. Álvarez has excelled against taller opponents before, most recently in his patient, systematic dismantling of Caleb Plant last November to become the first undisputed super middleweight world champion.

Bivol could use his size and reach, combined with his excellent technical skills and effective jab, to keep Álvarez at a distance, perhaps even wearing down the durable star. Álvarez has occasionally been slowed by opponents with strong jabs — but other than Floyd Mayweather, no opponent has been able to turn that success into a victory.

Álvarez says he sees similarities between Bivol and Gennady Golovkin, the middleweight king who fought Canelo to a disputed draw and a narrow victory for Álvarez in their first two bouts. Álvarez and Golovkin are expected to meet again later this year.

But first, Álvarez wants to solve another puzzle presented by an opponent who looks like a significant challenge on paper — even if anyone who has watched Álvarez knows he always meets these challenges splendidly.