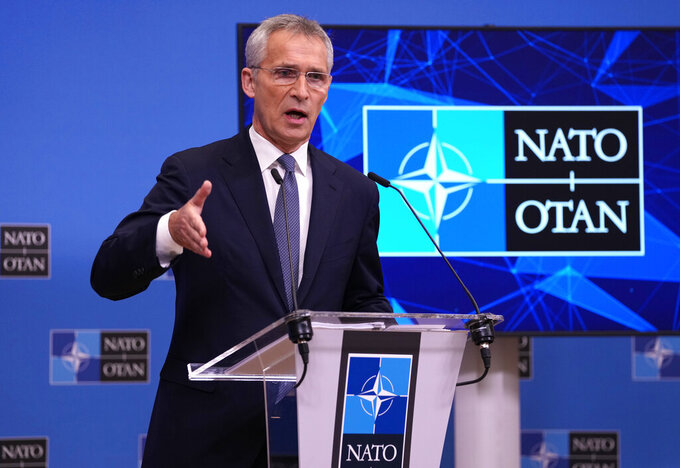 BRUSSELS (AP) — NATO Secretary-General Jens Stoltenberg urged Russia on Monday to be more transparent about its military activities near Ukraine but he stopped short of suggesting that Moscow might be preparing to invade its former Soviet neighbor.

Ukraine claims that Russia kept tens of thousands of troops and equipment near their common border after conducting war games earlier this year. Russia annexed Ukraine’s Crimean Peninsula in 2014 and has supported a separatist insurgency that broke out that year in eastern Ukraine and still controls territory there.

The United States has warned the European Union to be wary of Russia’s intentions, but EU diplomats say that while they have noticed Moscow’s military buildup, they do not believe that Russia might launch action anytime soon.

“We call on Russia to be transparent about its military activities,” Stoltenberg told reporters after talks in Brussels with Ukrainian Foreign Minister Dmytro Kuleba. “It is important to prevent escalations and reduce tensions.”

Asked whether he fears a possible invasion, Stoltenberg said: “what we see is a significant, large Russian military build-up. We see an unusual concentration of troops. And we know that Russia has been willing to use these types of military capabilities before to conduct aggressive actions against Ukraine.”

“I think it’s important also that we don’t now increase tensions, but we have to be clear-eyed, we need to be realistic about the challenges we face,” he said.

Ukraine’s defense ministry claims that about 90,000 Russian troops are stationed not far from their border and in rebel-controlled areas in Ukraine’s east. It said units of the Russian 41st army have remained in Yelnya, a town 260 kilometers (about 160 miles) north of the Ukrainian border.

Kuleba said “we have to be ready for all scenarios, for all options,” and he called for help from the 30-country military organization “to strengthen the resilience of Ukraine.”

In a joint statement, the foreign ministers of Germany and France warned Russia against taking any military action in Ukraine.

“Against the backdrop of renewed concerns about Russian movements of troops and hardware near Ukraine, we call on Russia to adopt a posture of restraint and provide transparent information about its military activities. Any new attempt to undermine Ukraine’s territorial integrity would have serious consequences,” the ministers said.

The ministers, Heiko Maas and Jean-Yves Le Drian, also urged Ukraine “to maintain a posture of restraint” and said they regret Russia's refusal to meet with them in the “Normandy format;” a reference to the group that France, Germany, Russia and Ukraine organized to settle the long-running conflict.

Geir Moulson in Berlin contributed to this report.