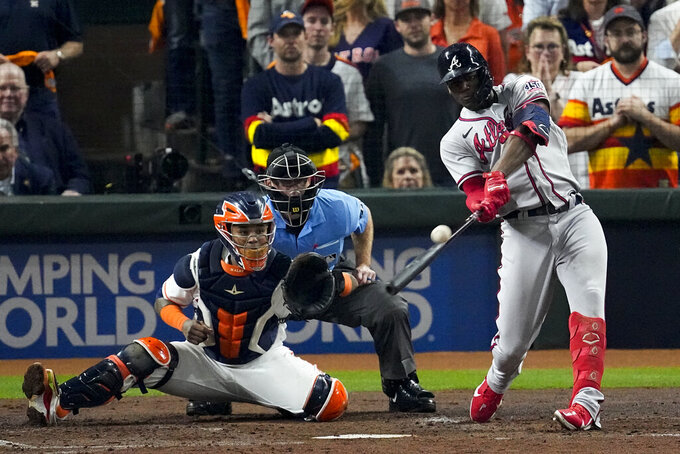 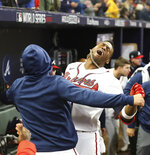 HOUSTON (AP) — A spare piece no more, Jorge Soler drove a pitch over the train tracks, out of Minute Maid Park and deep into the heart of Texas. He dropped his bat, tapped his chest twice and jabbed a hand toward the Atlanta Braves dugout, yelling “I'm here!"

Three months earlier, he was a .192 hitter on a fourth-place team.

Two weeks ago, he was sidelined by COVID-19.

Now, he was a World Series star, finishing off the Houston Astros for the Braves’ first World Series title since 1995.

A bit player during the Chicago Cubs’ drought-smashing victory over Cleveland five years ago, Soler was voted MVP of Atlanta’s six-game Series win over the Astros.

“We’ve known what he can do for so long,” Freddie Freeman said in the interview room as Soler waited to walk up to the podium. “Two years ago, he’s hitting 50 homers. It’s actually pretty incredible what he did in the World Series, getting COVID in the NLCS and missing 10 days and then coming back and not missing a beat.”

Soler hit .300 with three home runs and six RBIs. Numbers tell only part of the story.

Each home run was a moment in time, a round-trip trio that will be replayed over and over when Soler is introduced for the rest of his life.

He started off the 117th World Series with something that had not occurred in the first 678 games of baseball’s championship — a home run by the very first batter. After taking two balls from Framber Valdez, he turned on a 93.7 mph heater at the letters and drove it 382 feet, about four rows deep into the Crawford seats behind the 19-foot high left-field scoreboard.

Then, after Dansby Swanson hit a tying home run in the seventh inning Saturday at Atlanta, Soler pinch hit against Cristian Javier and got just enough of a hanging slider. The ball sailed over the glove of a charging Yordan Álvarez as he crashed into Truist Park’s 6-foot chain link left-field fence and landed in the Astros bullpen for a 3-2 lead that stood up, giving the Braves a three games to one Series lead.

Soler saved his best for last.

With the score 0-0 in the third inning Tuesday night, Atlanta put two on with two outs against Luis Garcia. Soler worked the count full.

There was double-barreled action in the Astros bullpen. Freeman watched intently from halfway between the on-deck circle and the plate.

Soler fouled off a slider, slapping the ball harshly behind third base, and then a fastball, even farther foul.

“I was sitting on the offspeed, and I was thinking to myself, if he throws me an offspeed pitch, I can connect and drive the ball," Soler said through a translator. “If he throws me a fastball, I’m just going to try to stay alive during this at-bat.”

As catcher Martín Maldonado splayed his right leg wide toward the first base dugout to set his glove down low, Javier threw an 83.4 mph cutter and the ball spun right over the middle of the plate, belt high.

“Immediately after I hit it, I turned around just to look at our dugout and start celebrating,” he said.

Garcia didn’t turn to look, either. Like Charlie Brown, he knew.

Soler's three Series home runs matched the most for the Braves, equaling Hank Aaron in 1957, Lonnie Smith in 1991 and Ryan Klesko in 1995.

Soler had a Cuban flag draped around him during the celebration, the second World Series MVP from the island nation after the Marlins' Livan Hernandez in 1997.

After defecting from Cuba in 2011, Soler agreed to a $30 million, nine-year contract with the Cubs. He was just 2 for 5 with a walk in the 2016 Series and was dealt to Kansas City that September for reliever Wade Davis.

Soler led American League batters with 48 home runs in 2019 — and also with 178 strikeouts. With Atlanta seeking replacements for its depleted outfield, the out-of-contention Royals dealt the 29-year-old on July 30 for minor league right-hander Kaley Kalich.

“It was challenging at first. I felt a little out of my comfort zone. I didn’t really know people,” Soler said. “It was kind of tough to go to a new place and start making those acquaintances and everything. Within a week, I felt right at home. Everyone in that clubhouse welcomed me in, and it felt instantly, after a little while, just like a family.”

Soler revived with the Braves, hitting .269 with 14 homers and 33 RBIs. He didn’t drive in any runs in the NL playoffs, missing five games because of a positive COVID-19 test.

He was among the fabulous four players acquired by general manager Alex Anthopoulos ahead of the July 30 trade deadline. Eddie Rosario, Joc Pederson and Adam Duvall also played key roles.

“You can go and get players, and you can throw him in a clubhouse, and sometimes that piece just don’t fit into that puzzle,” Freeman said. “They came into our clubhouse, and they fit perfectly.”

And now World Series rings will fit snugly, too.