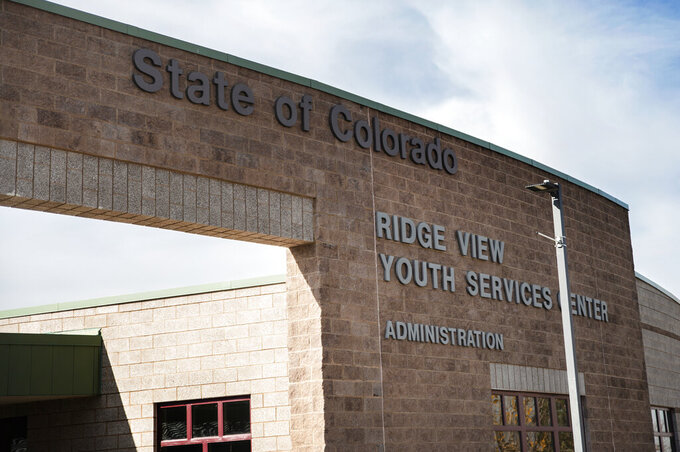 WATKINS, Colo. (AP) — On the treeless flatlands east of Denver, in a field of yellow-brown weeds that feels like the middle of nowhere, sits an empty campus with seven dormitories, 500 beds, a cafeteria, a gym and a football field.

Gov. Jared Polis has big plans for the place, a state-owned facility that for two decades held children and teens in the youth corrections and child welfare systems. Within a year or two, the former Ridge View Youth Services Center could house hundreds of people who are homeless and living on the streets or in shelters across the state.

The governor, as he walked the campus recently, said he envisions an all-encompassing recovery center similar to Fort Lyon, a former Army fort and then a tuberculosis sanitarium in Las Animas that the state turned into a temporary housing, drug treatment and job-training program. Fort Lyon’s first residents were bused eight years ago from the Colorado Coalition for the Homeless in downtown Denver to the fort surrounded by farm fields on the southeastern plains.

Plans are in the early stages, but Polis tagged $45 million for the project in his budget request for next fiscal year. The request comes five months after the state Department of Human Services shut down a privately run program for teenage boys at Ridge View in June, citing allegations of illicit drugs, fights and runaways.

The decision to close the youth treatment program, run by Rite of Passage, was unrelated to plans to open a homeless recovery center, the governor said. The surprise shutdown in June sent boys scattering into the fields surrounding Ridge View and resulted in the state hiring private investigators to find two of them.

“There were only 30 kids here, which is a ridiculous underutilization of a 500-bed property with 560 acres, especially when you have such a big homelessness problem in Denver and Aurora,” Polis told The Sun as he walked out of a vacant, industrial-sized kitchen and cafeteria. “There is a lot more you can do to help reduce homelessness.”

The governor’s budget request also includes a $50-million ask for a second homeless recovery center in Denver. Funding for both proposed recovery centers would come from federal coronavirus aid. Polis has proposed spending $200 million on homelessness, half of that for a competitive grant program for local communities to spend on emergency shelters, transitional housing and other services.

Ridge View has seven housing areas with bedrooms that each fit four beds. Empty chairs are still lined up to face a television screen in one of the dorm’s living rooms. And a sign hanging on a protective glass wall, which separated staff from boys who lived at the youth center, warns students not to knock on the windows or they would face discipline.

If the state were to remodel school classrooms into bedrooms, the campus could house up to 350 people per year in single- or double-occupancy rooms, officials estimated.

“This alone would not meet the needs of the entire metro area,” Polis said. “I think it would largely meet the needs of Aurora and Arapahoe County in terms of being able to make sure there is a place where people can recover and significantly reduce homelessness.”

Ridge View opened in 2001, after state lawmakers voted in 1997 to create a new campus for the increasing number of young people who were entering the youth corrections system. The number of kids in the system was climbing in the 1990s, peaking at about 1,000 in 2004, said Anders Jacobson, director of the state Division of Youth Services.

The numbers have dropped since then. There are now about 300 children and teens in the youth corrections system statewide, he said. For years, the state has considered repurposing the Ridge View campus into something more useful.

“There were times when I had under 20 kids here,” Jacobson said. “It outlived itself, quite frankly. The projections in the early 90s were spot on — they needed the beds. It topped out in 2004 and I expect it to keep declining.”

The campus would need remodeling in some sections, but it has all the elements for a homeless recovery center — a health center, rooms for mental health and substance use therapy, football and baseball fields, and space for job training. Youth programs on campus included culinary training and an auto mechanics garage.

Lt. Gov. Dianne Primavera said the Ridge View campus location is ideal, based on her conversations with Fort Lyon residents during a tour of that campus last week. “They said part of what helped them get over their substance use issues was getting away from the crowd and from the culture that had gotten them into that in the first place,” she said. “They spoke really highly of having facilities that were away, where they could actually recover and heal and get themselves together. I think this would really fit that bill.”

The proposed project is a joint effort of multiple state agencies, including the Department of Local Affairs’ Office of Homeless Initiatives and the Department of Health Care Policy and Financing, which runs the Medicaid program. Executive Director Kim Bimestefer joined the governor on the tour to start figuring out the “federal complexities” that would allow for Medicaid coverage of mental health and substance abuse treatment for folks who might soon live on the campus.

“I’m inspired,” she said afterward. “This is very inspiring to be able to surround folks with the right supports they need to be able to stop the revolving cycle of addiction.”

The project is likely to require approval from the state legislature, which returns to work in January. Between that and some remodeling of school rooms and other buildings, the soonest a new Ridge View could open is likely one or two years, said Kristin Toombs, director of the state Office of Homeless Initiatives.

“The vision is to have a supportive, residential community,” she said, with a range of recovery and job-training opportunities on campus and in the surrounding community of Arapahoe and Adams counties.

Similar to Fort Lyon, people would learn about the recovery campus through various nonprofits, doctors, case managers and mental health counselors, Toombs said. “That person could say, ‘Hey, I’m ready for a change,’” she said. “And they say, ‘Here is this option. Does it seem like a good fit for you?’”

Fort Lyon costs the state about $4.7 million per year to operate and about $18,800 per person, per year, according to a 2018 review. That compares to an estimated $50,000 in tax dollars spent per person who is homeless, based on various studies of emergency room and jail costs, according to the review.

An analysis of Fort Lyon’s first five years found that 47% of residents moved into permanent housing when they left the campus, which includes residence halls and small houses. An additional 29% left to live in other transitional housing, meaning 76% of residents did not return to the streets or shelters.