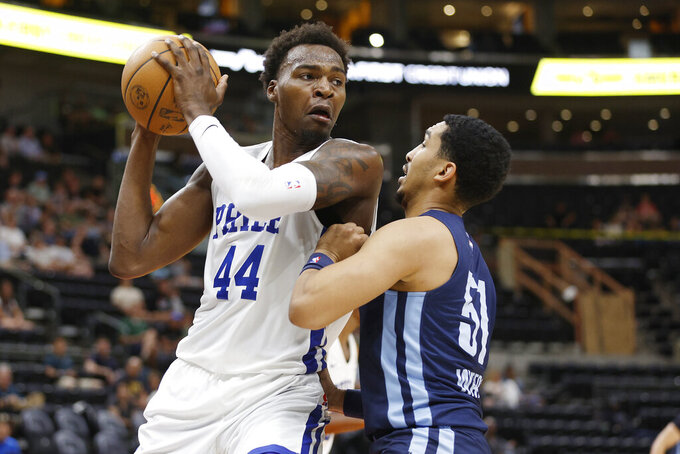 SALT LAKE CITY (AP) — Chet Holmgren shined in his summer league debut, scoring 13 of his 23 points in the first quarter to help the Oklahoma City Thunder build an early 20-point lead en route to a 98-77 victory over the Utah Jazz on Tuesday night.

The No. 2 pick in the draft also had seven rebounds, four assists and a Salt Lake City Summer League-record six blocks in 24 minutes. Holmgren, a versatile 7-footer from Gonzaga who averaged 14.1 points and 9.9 rebounds and ranked fourth nationally with 3.7 blocks per game, finished 7 of 9 from the floor and 5 of 5 at the free throw line.

Holmgren made 4 of 5 shots in the first quarter, including three 3-pointers. He sat out the first six minutes of the second quarter before finding Jalen Williams for a dunk to make it 42-22. Holmgren made six straight shots after missing his first attempt.

Jalen Williams, the No. 12 pick out of Santa Clara, added 17 points to help Oklahoma City spoil the debut of new Utah coach Will Hardy. Josh Giddey finished with 14 points and 11 assists.

Jovic, the No. 27 overall pick, was 5 of 7 from 3-point range and shot 9 of 16 overall. Six of his rebounds were on the offensive end, helping the Heat to a 47-23 edge on the glass. Jovic has played for Mega Basket in the Serbian league, averaging 11.7 points on 43% shooting in that league this past season.

Gui Santos, selected by Golden State with the 55th pick, had 12 points and five assists. The 6-8 forward from the Novo Basquete Brasil league was 3 for 3 from distance.

No. 4 pick Keegan Murray scored 16 of his 24 points in the second half, and Sacramento finished the California Classic unbeaten after beating Los Angeles.

Murray, the Big Ten’s leading scorer at 23.5 points a game, also had seven rebounds and three steals. He was 9 of 16 from the field, including 2 of 4 from 3-point range.

Max Christie, a Michigan State guard selected with the 35th pick, had five points and eight rebounds for Los Angeles. Christie, the 6-foot-6 shooter and wing defender who left East Lansing after just one season, was 1 of 6 from the field.

Jake LaRavia, the No. 19 pick out of Wake Forest, made four of Memphis' 15 3-pointers, and the Grizzlies won the opening game in Salt Lake City.

Memphis led by as many as 17 points. The Grizzlies made 7 of 9 3-pointers in the first quarter and finished 15 of 30. Memphis also had 29 assists on 37 made field goals.

Philadelphia had the ball down 101-99 with 15 seconds left but Jaden Springer had it stolen by Kennedy Chandler. Ziaire Williams made two free throws with 0.1 seconds left to seal it.

No. 23 pick David Roddy, a 6-6, 255-pound forward from Colorado State, scored four points for Memphis. Roddy was the Mountain West player of the year after averaging 19.2 points, 7.5 rebounds, 2.9 assists this past season.