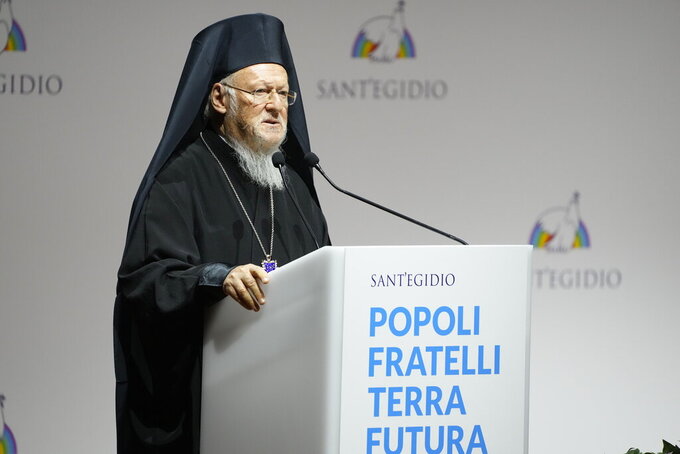 President Joe Biden and the spiritual leader of Eastern Orthodox Christians discussed ways to fight climate change and to end the coronavirus pandemic as well as the importance of religious freedom during an Oval Office session Monday.

Ecumenical Patriarch Bartholomew, 81, met separately with Biden and Secretary of State Antony Blinken not long after being hospitalized overnight for feeling unwell at the outset of his 12-day visit to the United States.

While Bartholomew’s visit was expected to draw attention to the plight of the small Orthodox Christian minority in his homeland of Turkey, he took a diplomatic tone at an earlier breakfast meeting hosted by Turkish Ambassador Hasan Murat Mercan, according to remarks released by the Greek Orthodox Archdiocese of America.

Bartholomew said his mission as patriarch “is purely spiritual, and demonstrates how Turkey can be — not only an inclusive society, but a bridge-builder between East and West.” He called the ambassador’s welcome an example of mutual “dialogue and respect.”

The remarks did not refer to ongoing sore points such as the Turkish government’s closure of an Orthodox seminary on the Turkish island of Halki 50 years ago.

Blinken, however, “reaffirmed that the reopening of the Halki Seminary remains a continued priority” according to State Department spokesperson Ned Price.

“They discussed the U.S. commitment to supporting religious freedom around the world and opportunities to work with the Orthodox Christian community worldwide on issues of shared concern, as well as with religious minorities in Turkey and the region,” Price said.

The White House said the meeting between Bartholomew and Biden “underscored the critical role that faith communities play in confronting the range of global challenges we all face.”

Bartholomew said at the White House that he was abundantly satisfied with his visit, praising Biden as a “man of faith, and man of vision.”

“We cannot allow any short sighted political agendas to interfere with our relationships, that are through, and in, Christ Jesus, the Lord and Savior of the world.” he said.

Blinken also praised the “remarkable leadership” Bartholomew, sometimes known as the “green patriarch,” has shown in calling for solutions to the climate crisis.

Bartholomew also said Monday he'd join with Pope Francis and the leaders of other major religions around the world to call on the global community to facilitate COVID-19 vaccinations for the world, especially for poor countries.

Bartholomew was released from a Washington hospital Monday morning after an overnight stay. He was brought to George Washington University Hospital on Sunday night after he felt “unwell” due to the long flight on Saturday and the busy schedule of events, according to the Greek Orthodox archdiocese.

Bartholomew is the patriarch of Constantinople, based in Turkey. He is considered first among equals among Eastern Orthodox patriarchs, which gives him prominence but not the power of a Catholic pope. He does oversee Greek Orthodox and some other jurisdictions, although large portions of the Eastern Orthodox world are self-governing under their own patriarchs.