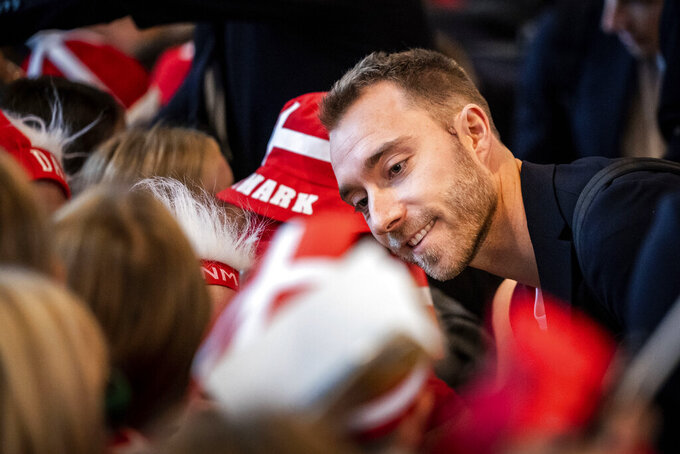 Ida Marie Odgaard, ASSOCIATED PRESS
Denmark's Christian Eriksen signs autographs for elementary school children during an event to send the national soccer team off on their journey to the World Cup in Qatar, from the Vilhelm Lauritzen Terminal in Copenhagen, Denmark, Tuesday, Nov. 15, 2022. (Ida Marie Odgaard/Ritzau Scanpix via AP)

DOHA, Qatar (AP) — Qatari World Cup organizers have apologized to a Danish television station whose live broadcast from a street in Doha was interrupted by security staff who threatened to break camera equipment.

Journalists from the TV2 channel “were mistakenly interrupted” late on Tuesday evening, the Supreme Committee for Delivery & Legacy acknowledged in a statement.

“Upon inspection of the crew’s valid tournament accreditation and filming permit, an apology was made to the broadcaster by on-site security before the crew resumed their activity,” organizers said.

Reporter Rasmus Tantholdt was speaking live to a news anchor in Denmark when three men drove up behind him on an electric cart and tried to block the camera lens.

“You invited the whole world to come here, why can’t we film? It’s a public place,” Tantholdt was heard saying in English. “You can break the camera, you want to break it? You are threatening us by smashing the camera?”

The incident five days before the World Cup starts revisited a subject that has been sensitive for tournament organizers who have denied claims there are strict limits on where media can film in Qatar.

Qatari organizers said they later spoke to Tantholdt and also “issued an advisory to all entities to respect the filming permits in place for the tournament.”

Denmark’s soccer federation has also been one of the biggest critics of Qatar among the 32 World Cup teams over the emirate’s record on human rights and treatment of low-paid migrant workers. They were needed to build massive construction projects since FIFA picked Qatar as host in 2010.

Danish players will wear game jerseys that have a toned down badge and manufacturers’ logo as a protest in support of labor rights when they play France, Australia and Tunisia in Group D.

A third-choice black jersey option has been included as “the color of mourning,” for construction workers who have died in Qatar.