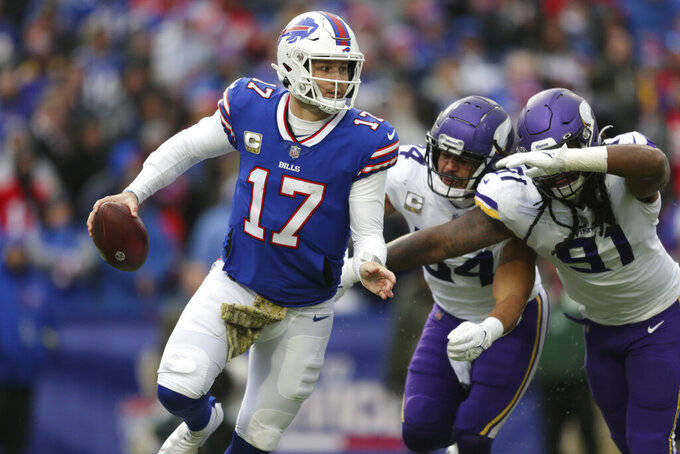 TURNOVER DIFFERENTIAL: Browns minus-5; Bills minus-1.

BROWNS PLAYER TO WATCH: WR Donovan Peoples-Jones. In his third season, Peoples-Jones has developed into a dependable pass catcher with the ability to make tough grabs in traffic and stretch the field. He's had six games with at least 50 yards receiving, the first player to do that since Braylon Edwards in 2007.

BILLS PLAYER TO WATCH: QB Josh Allen. The fifth-year starter has thrown six of his NFL-leading 10 interceptions over the past three outings, and also fumbled a snap in the end zone which was recovered for a TD against the Vikings. Allen has especially been inefficient in the second half and OT of the past three games in completing a combined 25 of 55 attempts for 337 yards with five interceptions, one lost fumble and no TDs.

KEY MATCHUP: RB Nick Chubb vs. Bills run D. After holding five of its first six opponents to 80 yards rushing or fewer, Buffalo has allowed 529 yards rushing in its past three games combined. Chubb has topped 100 yards rushing five times this season, but just once in his past four outings.

SERIES NOTES: The Bills have won four of the past six meetings — and three straight at home — since an infamous and comically inept 6-3 loss at Buffalo on Oct. 11, 2009. The Browns won despite quarterback Derek Anderson completing two of 17 passes for 23 yards and a touchdown. The game, played in gusting winds, was decided when Buffalo’s Roscoe Parrish fumbled a punt, which was recovered at the Buffalo 16, setting up Billy Cundiff’s 18-yard field goal with 23 seconds left. ... Two years earlier, the teams played in a blizzard at Cleveland, with the Browns winning 8-0 — on two field goals and a safety. The Bills were forced to bus home the next day after their plane slid off the runway while approaching the airport gate.

STATS AND STUFF: The NFL shifted the game from Buffalo to Detroit for safety reasons with a lake-effect storm projected to drop between one and three feet of snow on the Buffalo region. The Bills last played a neutral site game in Detroit in 2014 when a lake-effect storm led to the league moving the Bills home game against the New York Jets. The Bills won 38-3. ... The Browns' playoff hopes are hanging by the thinnest of threads following a wretched performance last week in Miami. ... The Dolphins came in ranked No. 28 in rushing and gashed Cleveland for 195 yards. Miami was the third team to post a season-high in rushing against the Browns. ... Cleveland's normally potent running attack was off last week as the Browns gained 112, most of them after the score got out of hand. ... Chubb leads the NFL with 11 rushing TDs and a 5.65-yard average per carry. ... Chubb's been especially effective in the fourth quarter, leading the league with 296 yards. ... This will be Jacoby Brissett's second-to-last start before turning things over to Deshaun Watson, who returned to practice this week for the first time while serving his 11-game NFL suspension. ... Browns DE Myles Garrett and Buffalo's Von Miller are the only players with at least seven sacks in each of the past six seasons. ... Garrett has been slowed by a shoulder injury sustained in a Sept. 26 car crash. ... Browns offensive coordinator Alex Van Pelt played quarterback (1994-2003) and coached (2006-09) in Buffalo. He also spent two seasons as the Bills' radio color analyst. ... The Bills have lost two straight for just the third time since the start of the 2019 season, and haven't dropped three in a row since a four-game skid in 2018. ... The Bills are 4-3 when tied or leading at the half. ... Bills coach Sean McDermott is 0-1 against Cleveland, one of just four teams — and the only AFC opponent — he's yet to register a win against since taking over in 2017. ... Allen is 25-20 overall, and 5-3 this season when committing a turnover. He's 7-13 overall when committing a turnover after halftime. ... WR Stefon Diggs has topped 100 yards receiving six times this season, and ranks third in the NFL with 72 catches and 985 yards, and tied for second with seven TD catches. ... The Bills have turned the ball over in the red zone in each of their past five outings (three interceptions, two fumbles). ... Poyer is tied for third in the NFL with four interceptions despite missing four games because of an injury.

FANTASY TIP: Moving indoors should provide traction to the Browns' Chubb-led ground attack against a Bills defense which could be missing Edmunds.