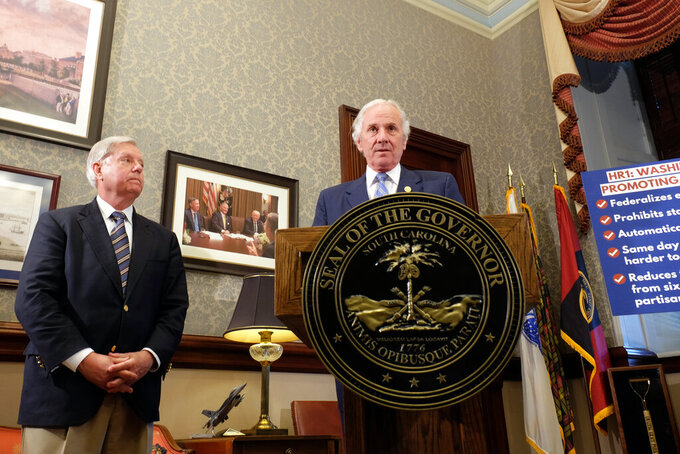 The two Republicans insisted the bill would take power away from states and lead to less secure elections. The critique comes as conservatives across the country push back against the proposal that could reshape the U.S. electoral process for years, while Democrats argue that they are trying to rebuild trust in the ballot.

The federal legislation touches nearly every aspect of the electoral process. It would restrict partisan gerrymandering of congressional districts, strike down hurdles to voting and bring transparency to a murky campaign finance system that allows wealthy donors to anonymously bankroll political causes. It also would strengthen election security and ethics laws.

“This is the largest invitation to fraud that I can imagine,” McMaster told reporters in Columbia on Tuesday.

Graham decried aspects of the bill, from establishing automatic voter registration to matching public funds from small donors to Congressional candidates, as power grabs by Democrats.

He framed other portions of the bill in broad terms, saying it would move redistricting responsibilities from states to the federal government, require automatic voter registration, and send ballots to people who don't even request them.

The proposal as written would require states to shift federal voter registration from an opt-in to an opt-out process for people providing information to agencies during processes like getting driver's licenses, according to The Brennan Center for Justice. It would require states to establish independent commissions to draw redistricting maps. It would not force states to send ballots to voters who didn't ask for them, though it would require mailing out ballot application forms to all registered voters before federal elections.

And it would function in opposition to the proposals restricting voting access that have sprung up in Republican-controlled statehouses this year. Fueled by former President Donald Trump’s false claims of a stolen 2020 presidential election, Republican lawmakers have proposed adding new barriers to voting including requiring photo IDs, limiting ballot drop box locations and access, and cutting down on early voting hours.

In South Carolina, where photo IDs are already mandatory and drop boxes aren't allowed, lawmakers haven't debated the broad changes sought in the other states.

In the current session, they have considered limited changes to existing election laws, including creating uniform rules across counties and reshaping the board of the state election commission to give senators a say on who gets those positions, though McMaster said Tuesday he disagreed with the latter proposal.

The governor also cited as evidence of South Carolina’s dedication to strong election laws the state's fight against removing the witness signature on mail-in ballots in last year's presidential election. That was a requirement that the U.S. Supreme Court eventually upheld.

The federal legislation still faces steep hurdles in the Senate, where procedural rules would let Republicans block it.